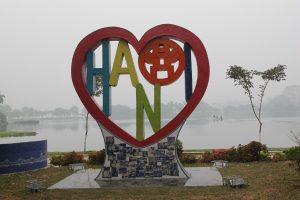 Having been in military service during the early 1970’s, but never deployed, there was this desire to actually get to Indochina, a place that none of us had ever visited. Vantage travel offered us the opportunity, and we, along with Pam & A.J., Julie’s sister and brother-in-law, began our travel with a series of air flights from Orlando to Los Angeles to Hong Kong to Ha Noi, Vietnam. Ha Noi’s airport was new and modern, having just opened to the public. From there, we traveled by charter bus to the Hanoi Sofitel Hotel as we learned a bit about the country’s long history and current circumstances. One of the tidbits of information was that, in Vietnamese, all words are actually 1 syllable, thus the city spellings that you observe in this log. Also, as one would expect in this region and in a city of ~6 million people, (Vietnam is a country of ~95 million), the streets were dominated by motorbikes carrying passengers, furniture and whole families.

After arriving and settling in a beautiful hotel room overlooking two lakes in downtown Ha Noi, we went for a walk along the road between the two lakes, visiting a Buddhist Temple, engaging the local vendors, dodging motorbikes and looking for The Season’s Restaurant. Upon returning, we were hosted with a great “Welcome” dinner, and finished the night with nightcaps on the Hotel’s roof bar.

In the morning, after a huge buffet breakfast at the Hotel, we took a bus to the Ho Chi Minh memorial, where we observed his mummified remains under fairly tight security. It turns out that although Ho Chi Minh wanted to be cremated, his body was preserved by the Russians against his wishes. Ho Chi Minh was born in 1890, and was educated and lived many years in France until he was arrested for Communist agitation. After release and fleeing to Hong Kong, he was arrested again and held until his release was negotiated. As a founder of The Communist Party, Ho Chi Minh travelled extensively to Europe, Russia and the United States, spoke 17 languages and wrote in 7, and fought for Vietnam’s independence from France. After World War 2, Vietnam was granted independence on September 2nd, 1945, where at the Geneva Accord, it was decided that the country would be split into North, under the direction of Ho Chi Minh, and the South, under the presidency of Dang, (supported by the French), with a reunification election (which never happened), scheduled in 3 years. The issue of reunification escalated into the familiar Vietnam War with Ho Chi Minh seeking help from communist Soviet Union and China, and the South being supported by France and the United States. Ho Chi Minh dies in Hanoi on September 2nd, 1969 and the war with the USA ends in 1975. He never married and had no surviving family or children. In addition to visiting the Ho Chi Minh Memorial, we went to the site of his residence, the city’s former Zoo and Gardens where he met foreign dignitaries and lived simply.

After this tour, we took the time to walk through the old town Ha Noi markets, where every sort of animal, (cooked or raw), and every sort of fresh fruit and vegetable was readily available.

From there, we traveled to a local Buddhist temple for lunch, where the Temple’s nun was running an orphanage for 50 children.

After lunch, we returned to the Hotel where we had drinks and hors d’oeuvres on the roof before traveling via cab to The Season’s Restaurant for a wonderful 7 course meal for only $17 each!

In the morning, we had breakfast, and used our short amount of free time to travel to Starbucks, where we enjoyed a coffee and watched the local power line workers, before returning to the hotel to pack and travel to the airport, for our trip to Siem Reap, Cambodia, with our time in Ha
Noi now at an end.