It is now Friday morning, October 10th, and our great Caribbean adventure has the remaining four of us, Peter, Nikki, Julie and Rocky, in Phillipsburg, St. Martins with no schedule to keep and only our whims to drive us. After collecting groceries and boat fuel, and checking in and out of the country, we reorganized and cleaned the boat and began a leisurely “sail” to Anguilla. Unfortunately, the wind was still from the west, requiring us to motor-sail part of the day, but this allowed Rocky to catch a 3’ barracuda, which we filleted on the back of the boat in preparation for an upcoming dinner. After arriving in Road Bay, Anguilla, we took the dingy ashore to a restaurant named Roy’s, where we ate dinner and met Roy and his daughter, our waitress, Clara – a British family that had been running their business there for years. That night, after returning to the boat, we prepared for the long crossing back to the BVIs by wrestling the motor off the dingy onto the back of our sailboat, and settling in for an early, quiet night.
We rose early, before dawn, the next morning, pulled anchor and set off for Virgin Gorda in the British Virgin Islands, arriving 11 hours later at Gun Creek Bay to seek out Customs to check-in. However, the Bay looked deserted, and so we moved the boat to nearby Leverick Bay to anchor for the night. Since Pusser’s restaurant ashore wasn’t open, we ate a dinner of barracuda and chicken on board, and called it a night.

The next morning, we went ashore to shop for a few groceries and check on the weather forecast, as a storm named Gonzalo had formed to the East and was heading into the Caribbean. After breakfast, we sailed to Spanish Town to check into the BVI – our final country and the home of the Grande Plaisance III. Then, we sailed around the corner and picked up a mooring ball at The Baths – a series of large granite boulders scattered along the shore – that form a series of trails and tunnels that eventually lead to the top of the bluff. After tying up our dingy on a swim area buoy-line, (no beach access for vessels), and swimming to shore, we took the trail and visited our historical favorite spots along the way, (Dave’s Living Room, Swim Model Boulder, The Window), and proceeded to The Top of the Baths where we enjoyed drinks and appetizers and the wonderful view.

After returning to the boat, we sailed to The Bight at Norman Island – an historic site where the inspiration for Stevenson’s “Treasure Island” came from, and the home of Willy-T’s – a floating ship that doubles as a night Club and bar. We anchored a short distance from Willy-T’s. That night, we put on our best party clothes at went to Willy-T’s for drinks and burgers and were met by a huge growing crowd of visitors and locals who speed-boated over from Tortola. As usual, the crowd was drinking and dancing, jumping off the second-story dance floor and partying like there was no tomorrow late into the night. After contributing our fair share to the party, we dragged ourselves back to the boat for a few hours of sleep in what was left of the night.
We awoke the next morning, Monday, October 13th, to the bad news that the storm, Gonzalo, was now a hurricane and it was headed our way. After checking in with the Charter Company at the Marina, we were instructed to bring the boat into the slip to sit out the storm. We sailed that morning to the boat’s home port – Hodges Creek – where we boat the boat into a secure position at the dock, and prepared it for the impending storm. Meanwhile, we checked into a room at the Marina’s hotel where chaos was breaking out as frantic sailors came in search of rooms that were in very short supply. After battening down the boat (tying down the boom and sail, removing the bimini’s and cushions, removing perishables from the refrigerator, setting the anchor, etc.) we headed off to Pusser’s restaurant for dinner and drinks, before returning for an uncertain night at the hotel.
That night the rains came and the winds blew, but we were lucky and the hurricane passed a good bit to the north of us, leaving us with a beautiful morning sunrise. Peter and Rocky started putting the boat back together while Nikki and Julie headed to town for our last big supply run. After getting ice, water and fuel, we were back on the water before lunch and heading to Peter Island where we picked up a mooring ball, preparing to hook-up with the first night of the Interline Regatta people at the Ocean Beach Club. However, we soon realized that the hurricane closed the Club, and that the party was moved to Willy-T’s back at Norman Island. We quickly moved to the new location, picked up a mooring ball, and soon found ourselves surrounded by vessels already in the area for the upcoming Regatta – an annual sailing race between airlines that bring a large number of pilot’s, stewardesses and partyers to the islands. That night, we were back in our familiar places aboard the floating club, where the party took a more sedate and relaxed attitude in spite of the fact that it was Toga theme night. We met people, danced a bit, and closed the party up before returning to our boat for the night.
The next morning, we had a big breakfast on board, and then left to sail to Sandy Island – a small, isolated but beautiful island in the middle of Drake Channel. Once there, we struggled to get a mooring ball or to get our anchor to hold, so after a good swim to the island, a bit of floating on rafts off the stern and lunch, we left to head to Cane Garden Bay, the next stop on the Interline Regatta’s nightly ports. We arrived early, but not so early that there weren’t already a considerable number of vessels already there, and we hurried to pick up one of the few remaining mooring balls in a good location. While there, we observed a couple alone on a 34’ sailboat struggling to pick up a mooring ball, ending up in the water to rescue their boat hook. It then became apparent that their dingy motor would not start, and so we went over to offer assistance. The couple, Mickey and Denise, were a fun pair who joined us when we went ashore to attend the Interline Regatta’s nightly themed party (80’s night) at Quitos Gazebo Beach Bar & Club. The night was filled with meeting new people, dancing and exploring the local club. Mickey was a Fedex pilot, and Denise worked at UPS. This was their first sailing adventure, and they only just got onto their charter boat because of the hurricane delays. We made a modest night of it, and returned our new friends to their boat before retiring ourselves. In the morning, we finally got a day of good wind, and spent the day sailing before heading for Marina Cay for the night. During the day, a few wind gust came up, and we encountered a bit of adventure when the port genoa line snapped leaving us scramble to get the jib back under control. After substituting an extra dock line for the broken line, we reefed the sails and went into the port where Rocky broke the boat hook while trying to hook onto a mooring ball. After finally getting settled in port, we were surprised to see our new friends, Mickey and Denise, come into port, still without a working dingy. We enjoyed drinks and snacks with them before all of us heading to shore for dinner at another Pusser’s Restaurant. On this night, The Interline Regatta is having its Race Kickoff back in Road Town, Tortola, and a place we would rather avoid. And so, instead we spend an excellent evening in a quiet harbor, among friends – new and old!

The next morning is a beautiful day, but a sad one, as it will be our last full day on the boat. Today, we set sail for Savanah Bay, a tricky isolated bay that only has a narrow entry between the reefs. After negotiating our way in, we set anchor and enjoy the time swimming, snorkeling and eating lunch, before pulling anchor and heading off to The Bitter End, the last port to the furthest east of the BVI. On the way there, we gauge our sailing as we can see the Regatta racers maneuvering in the distance, as they are heading to the same port. WE beat them there and take up a prime location on a mooring ball near the Bitter End Yacht Club. After dinner at the restaurant on Saba Rock, a tiny island in the middle of the narrow channel, we dress up and head to the Yacht Club for the nightly Regatta party, and who do we meet, but our friends Mickey and Denise – fully dressed for “Viking” night. That night, the party is in full swing, and it is late when we say goodbye to our new friends and call the night over.

The morning is Saturday, October 18th, and after we release from the mooring ball, we begin our last sail back to Hodge’s Creek to turn the boat back in. The check-in goes quickly, and we are packed and in the taxi to the Ferry Dock before noon. After checking in at the Ferry Dock for the 2:30pm Ferry, we walk across the street for a last local meal at the Road Town, Tortola Pusser’s restaurant. We toast a final BVI toast before boarding the Ferry for our 1 hour trip back to St. Thomas in the U.S. Virgin Islands. In St. Thomas, we taxi to our hotel on the beach near the airport, where we swim in the pool and share dinner in the restaurant with a wedding party celebrating their “big day”. The next morning, it is up and out at 5:30am for an 8:00am flight to Miami which arrives back in the U.S. mainland at 11:00am. It is then a 90 minute train ride back to Palm Bay to Peter & Nikki’s Condo, where we say our sad goodbyes and finish our nearly-6-week Great Caribbean Sailing Adventure. What everyone agrees on – What a Great Trip!! 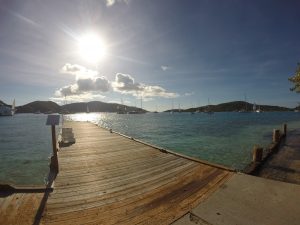