This part of our trip started with flying on Dragon Air from Ha Noi, Vietnam to Siem Reap, Cambodia. Cambodia, (or historically what was referred to as Kampuchea), also has a long, (and sad), history. The Cambodian people have also been referred to as the Khmer people, and the Khmer Empire reached its peak in the Siem Reap area between 900 and 1200 AD. During these times, Emperors would build temples that needed to be completed during their lifetimes, giving rise to a large number of sandstone temples scattered throughout the jungle. With an engineered series of waterways and a location near the largest freshwater lake in the region, the Khmer Empire moved large stones, and provided rice farming to support what was likely the world’s largest city of the time, estimated at ~1 million people. By 1200 AD, after repeated attacks from the west from Thailand and from the north from Mongols and the Chinese, the Khmer Emperor decided to move the capitol to the south, closer to the Mekong Delta and the present location of Phnom Penh, for better security. Abandoned and forgotten, the temples of this area were overgrown by the jungle until “re-discovered” by the French in the mid-1800’s. The French spent considerable resources over the next 60 years clearing away the jungle, building infrastructure, and restoring these ancient temples, but World War 2 had left the French control of the region seriously weakened. Having received independence soon afterwards, the country fell to the communist Khmer Rouge, led by Pol Pot, after the USA left the region in 1975. Unfortunately, Pol Pot’s idea of reforming the country and imposing communism involved evacuating all cities and forcing everyone to work in the rice fields. In addition, he instituted a systematic elimination of all intellectuals and dissidents in the country, killing nearly 5 million people in “the killing fields” until he was driven from power and into the mountains in 1979 by the Vietnamese army. However, the Khmer Rouge continued their “civil war” within Cambodia until Pol Pot’s death in 1998. Today, Cambodia is a country of only ~17 million people, 50% under 25 years old, that is primarily agricultural, surviving principally on rice and fish supplied from the Mekong River and seasonal monsoons that characterize the country.

Upon arriving in Siem Reap, we traveled to the Sofitel Angkor Phokeethra Resort where our rooms were located among beautiful ponds and gardens. That night, we went to a local restaurant where we had an enjoyable dinner while watching a local show of traditional Cambodian dancing.

The next morning, Julie and Rocky arose early and hired a tuk-tuk (motorbike carriage taxi) to take us to the Angkor Wat Temple for observation of sunrise. Angkor Wat was the largest of the Khmer Empire Temple constructions which covers a very large area and is the most famous of these monuments. We observed sunrise from behind the temple with its reflection in a lake with ~400 other early risers.

After the sun was up, we took our tuk-tuk back to the resort where we met the rest of our group for an extensive buffet breakfast before we left with the group for a more guided tour of Angkor Wat again. 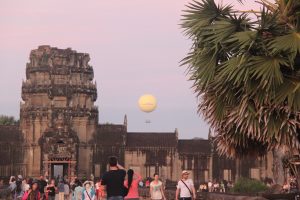 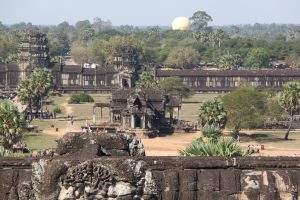 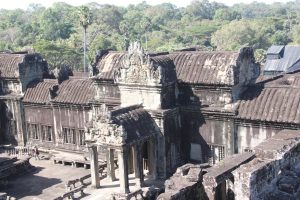 After Angkor Wat, we went to the Bayon Temple Ruins (also known as Angkor Thom or the temples of smiling faces) before heading to a local restaurant for lunch. Unfortunately, many of these temples were ransacked by archeological thieves during the chaos of the 1970’s and 1980’s, and many of the statues have had heads and pieces stolen for collectors.

That afternoon, we explored to Ta Prohm Temple, made famous by its use in movies such as Indiana Jones and the Temple of Doom, and Angelina Jolie’s Tomb Raider. This Temple is somewhat unique in the some of the jungle has been left so that visitors can observe the integrated nature of the two. 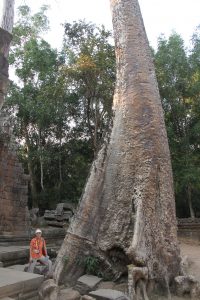 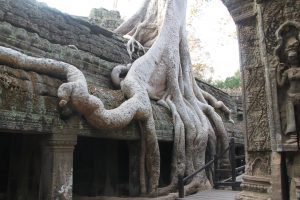 That afternoon, we returned to the hotel and had a chance to explore the local market before having dinner at the hotel and being presented by another traditional Cambodian dance troupe.

The next morning, after breakfast, we traveled to a local Cambodian dance school. Traditional Cambodian dance was also a lost art under the Pol Pot regime, and only a few teachers survived the genocide. Today, the few students that were taught by the survivors are now the teachers, in spite of being under 25 years old themselves. Students to the school must be between 9 and 13 years old, must come from a needy family and must demonstrate capability and flexibility. Their training takes many years, but also includes a traditional textbook education, as well.

After visiting the dance school, we traveled to the Artisans Angkor Silk Farm that demonstrated the life cycle of growing mulberry plants for the silkworms, feeding them, harvesting their cocoons, unraveling the silk thread to spinning thread and weaving materials. The process is highly manual and the farm employs many local people who earn ~$1/hour, dependent upon their capabilities.

For lunch, we went to a restaurant in downtown Siem Reap, and took the occasion afterwards to walk across the street to the local market to shop before returning to the hotel to leave on our optional village tour to an upcoming Ecotourism site. At the Ecotourism site, we rode on an Ox Cart, took a fishing dugout canoe on a brief paddle, and enjoyed dinner and wine while watching sunset on the horizon. At night, we returned back to the resort to pack and to ready ourselves for transfer to our boat and the trip along the Mekong River. 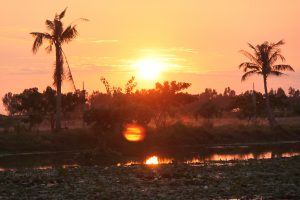