We’ve known for months that FIFA had finally approved awarding the 2009 Under-17’s World Cup to Nigeria, and that the approved stadiums for games in the country included Teslim Balogun Stadium in Lagos.  The posted calendar included the local playing of not only Group B matches in late October, (while we would be in the U.S.), but also both Semi-final Matches on Thursday November 12th.  We asked friends to try to find us information about tickets while we would be gone, but there was no way to predict who would be playing.

Now, you must understand that nothing in Nigeria has common ground between it’s diversity of tribes, socio-economic classes and religions, other than futbol, (soccer to us Americans)!  It is the single passion that unites the country and evokes tears of disappointment as well as of joy and exhilaration among all natives.  Nigeria was the defending Under-17 World Champions, but over half of their prospective pool of players were ruled ineligible by virtue of being too old as determined by MRI bone scans of player’s growth plates.  In a country where few births are registered, not all children attend school, and government records are what you pay them to be, determining age is not a trivial matter.  There was real concern that the eligible remaining players would be unfamiliar with each other and too inexperienced to defend their title.

So while we were in the U.S., our friend attended a Round-of-16 game, reported that the adventure was “safe”, and obtained 3 tickets for us as well as 6 others for himself and friends.  Imaging our surprise when the two semi-finals would match Columbia vs. Switzerland followed by Nigeria vs. Spain.  We promptly bought Nigeria jerseys to wear to the match, recognizing that the semi-finals would now bring a massive crowd! 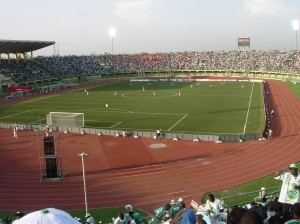 Now, we could have tried to get VIP tickets and sit in the ultra-secure area under the only covered section of the stadium, (which holds about 40,000 people in total), but instead we took general admission tickets, (at a ridiculous cost of $3.50 each), and sat with the average fan. The first of two semi-final matches would start at 4:00pm, and we had planned to leave the office by 3:30pm.  Beside ourselves, we took our Nigerian driver, and our group include two other expats, one of their 14-year-old daughter, and two Nigerian friends with one of their 15-year-old son – nine of us in total, travelling in 2 vehicles.

The adventure began in frustrating manner, as we were delayed in getting our group together and we ended up not leaving until 4:45pm.  We were following our friend, Scott’s, vehicle when our entry to the highway was blocked.  Soon after, the escorted Spanish and Nigerian Team buses passed by us, followed by 1000’s of okadas.  Once they passed, we were allowed to follow the VIP caravan all the way to the stadium, where, by virtue of having our own automobiles and showing our tickets on the inside of its windows, we were escorted into the VIP parking lane and parked in a secure lot for 200 naira, ($1.50).  Outside the stadium, the crowd was celebrating with horns, shouts of “Up Nigeria”, and general anticipation of the game to come.  It was quite a festive atmosphere, and we hired an official “escort staff” to guide us to our seats.  Entry to the stadium required traversing five different checkpoints where tickets were shown, and armed guards scrutinized us.  All the way along, fans saw us as special guests coming to support their cause, and they all sought a handshake or a thumbs-up or sign of encouragement from us. 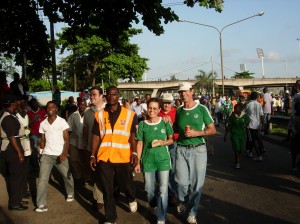 We reached our seats easily enough, halfway up the stands, behind the corner flag and directly above the fan-base’s drum and trumpet group.  The horns and noisemakers were continuous and deafening, as fans danced on their seats, and celebrated with passion as the Swiss destroyed Columbia in their second half of the first match.  It was clear we were very much novelties, as all manner of fans continually requested to have their pictures taken with us.  As the Swiss game ended, the victorious Swiss players circled the track and waved and threw souvenirs to the already frenetic crowd.  By the time the Nigerian Team took the field for the next match, the stadium was full, and the crowd had already completed 20 rounds of the wave, sang a variety of songs and was giddy with anticipation. 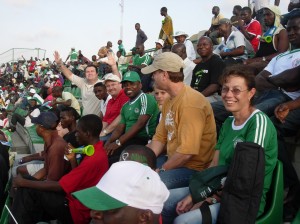 The only time the noise stopped was for the Nigerian National Anthem, which needed no microphoned singer to lead the 40,000 voices, that rose up as one in pride and patriotism.  And then the game was on!  The noise rose and fell with the Nigerian play, and reached a peak when the Nigerian Team broke the scoreless deadlock on a brilliant goal in the 31st minute.  On that goal, the crowd simultaneously rose to their feet, and let out a roar that shook the concrete structure.  From that moment on, the party was in full swing.  When Nigeria added a 2nd goal in the 2nd half, and then a 3rd with 10 minutes left in the match, we took our cue to begin our exit.  By this point, everyone we encountered was in full rapture, some with tears of joy in their eyes, satisfied that they would be in the finals, and proud of their young “Golden Eaglets”.  Their team played a positive, technical, and entertaining style.  And, although the Spaniards would pull one goal back at the end of the match, the Nigerians looked positively dominant in their march to their title defence. 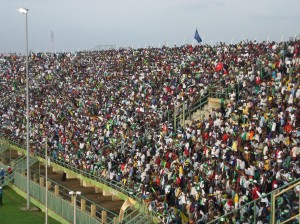 As we threaded our way through the crowd and out of the stadium, we were assayed by continual handshakes, hugs and pats on the backs from all manners of local fans who sincerely appreciated that oyibos would come out to be with them to support their Team!  Up Nigeria! 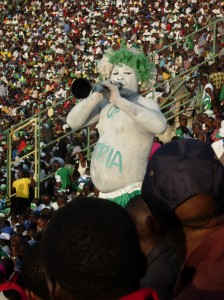 Once out of the stadium, we returned to our cars, exited the VIP parking lot and drove home through streets whose only activity now were the fans celebrating running down the street, waving flags and dancing with anyone they could find.  The experience for us had been exhilarating and wonderful, but exhausting, as we returned home completely worn out. 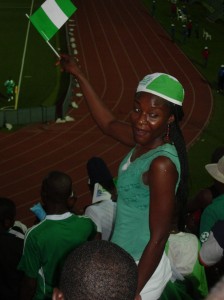 In prologue, we have been asked if we felt unsafe or unprotected in our adventure?  The whole time, we never came across any situation that we felt was unsafe, as everyone we met were friendly, helpful and nothing but courteous.  Like many other situations in Nigeria, our profile was low, our support for Nigeria was clear, and the locals saw and appreciated our participation at their level.  We had a great time and are very glad we took the unique opportunity to participate, and that the local population welcomed us into participating in a small part of their lives. 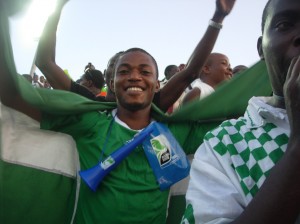 In an alignment of the futbol planets, two days later on Saturday, Nigeria’s National Team improbably qualified for the 2010 World Cup in South Africa by beating Kenya, and by Tunisia’s devastating loss to Mozambique!  The weekend’s futbol wrapped up with Nigeria’s Under-17’s losing to Switzerland 1-0 on Sunday in a gruelling Championship game, denying them their record 4th Under-17’s World Championship.  What a week for futbol!