The combination of southern proximity to Antarctica, the meeting point of two oceans, and the meeting of the sea with the landscape of Africa, had to come together to provide the Cape Town area with an amazing biodiversity of flora and fauna that is a pleasure for the senses.  The promise was met from Day One, when only hours after arriving and while driving along the coast of False Bay, we spotted whales casually swimming only ~60 meters from shore.  Not once, but numerous times we would stop to watch these gentle giants make their way down the coast.  Farther on down the coast past Simonstown, we stopped at The Boulders, where a resident African Penguin colony can be observed in its natural habitat up close and personal.  Later that day in the Cape of Good Hope Nature Reserve, one could see herds of Eland and Waterbucks grazing nearby. 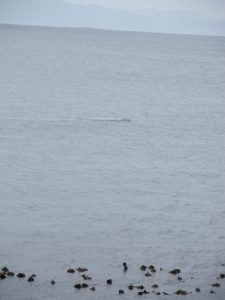 Whale under the surface at False Bay

Penguins at The Boulders 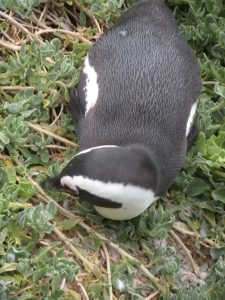 If fact, Penguins, Seals and Antelope are fairly common all around the area as they could be seen at many places while driving along the coast or hiking in the parks.  Also, since it was just the beginning of “Spring” while we were there in September, numerous flora were in bloom.  Amazing bushes 6 meters across with hundreds of full yellow blooms, and delicate red buds springing up between rocks welcoming the direct sun were everywhere we went.  We do not know what their names were, but we know that they were beautiful, and we very much enjoyed them. 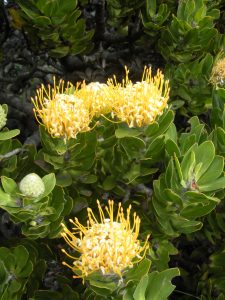 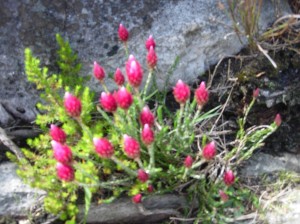 One morning, we drove to a Wildlife Outreach Program hosted by Spier Winery and Resort located south of Stellenbosch, to the west of Cape Town.  Here, there is a privately funded program aimed at protection and reintroduction of both birds of prey, and of African Cheetahs.  It turns out Cheetahs are very much endangered in Africa, since their habitat is shrinking, and they are increasingly in conflict with the growing South African Cattle and Sheep industry.  Until recently, Cattlemen would deal with any Cheetah problem by killing them. But, this Outreach Group provides rehabilitation to injured Cheetahs, and provides free herd dogs to ranchers as an alternative means of control.  It turns out Cheetahs prefer flight to fight, and a protective guard dog is all that is needed to keep the Cheetahs at bay.  In order to be able to afford the dogs and their training and to provide this service to local ranchers, the Outreach Program uses some of their locally raised cats, which are not suitable for being returned to the wild, as part of their human education and fundraising program.  We watched as three 4-month-old cubs were fed, played with and socialized to humans, as future ambassadors.  Then, Julie and I were allowed to enter a Cheetah enclosure and pet and meet close up a full grown, non-tethered, 14-month-old male Cheetah named “Peter”.  He was an energetic, but beautiful animal, clearly enjoying the human touching, as he “purred” a low rumble, and playfully rolled on his back.  Likely, a “once-in-a-lifetime” experience for both of us. 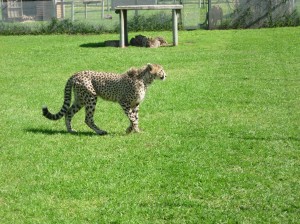 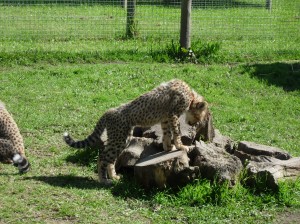 Peter purring away while Julie and Rocky pet him