Namibia is just coming out of its winter, and the temperatures were 40 F at night, and 60 F during the day with crystal clear skies throughout.  After an excellent lunch, I returned to my room and tailored the talk for what was to be a mixed group of attendees at the evening’s presentation, including Ministry of Mining staff, University Professors and geology students. After the meeting, Ben, who is Department Geology Professor at the local University, took me on a nighttime tour of the campus and geology building, although since it was Friday night, campus was fairly empty.

We went to dinner at a beautifully quaint historical German-area restaurant in the center of town, and I had my first Oryx steak.  Ben was my host throughout, and was a gracious and wonderful host, providing many insights into the life and livelihood of the energy and mining industry in Namibia.

I arrived in Kumasi via a short 45-minute flight from Accra. Cyril and Van -Dyke picked me up and took me through the town as people we leaving church in their colorful Sunday-best.  Although Accra on the coast, is the better known town, Kumasi is larger boasting a population exceeding 4 million people! It is a diverse city that hosts manufacturing, agriculture, and the Kumi Numari University of Science and Technology or KNUST as it is known. 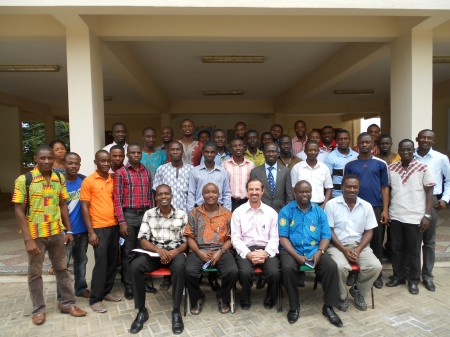 We checked it at the Golden Tulip Hotel, a very nice, modern hotel, that was hosting a Professional Tennis Tournament Finals that day.  Since my room would not be ready for an hour, we took a trip over to the University to check out the Science Department.  KNUST celebrated its 60the Anniversary this past year, and it is a large University of 28,000 Undergraduate and 5,000 graduate students.  It has a rural, landscaped, sprawling campus on which nearly 10,000 students reside. Although it was founded decades ago, the University was renamed after Ghana’s first President only in the last decade.  Geophysics sits under the Physics Department, and their 4-story linear classroom and office buildings remind me of similar, past educational buildings in Florida. Given it is Sunday, and the day before the Islamic Holiday, Eid el Fitr, there are not many students out and about – their school term is about to begin. Ghana is about 60 percent Christian and 30 percent Islamic, and although students have committed to coming to the lecture tomorrow during their holiday, there is some concern of number of attendees.  The Geophysics Department is made up of 27 3rd and 4th year undergraduates, and about 10 graduate students.  In a strange twist of fate, Cyril is one of the recipients of last year’s SEG Student Symposium, and attended the Annual Meeting in San Antonio.  As the most senior graduate student in the Department, he serves as a role model for many of the younger students.

We return to the Hotel where I bid farewell until tomorrow, complete my check-in, and unpack my bags in time to grab a late lunch and catch the finals of the tennis before Cyril and Van Dyke pick me up at 10:00am in the morning, I have a chance to take an hour’s jog in the region of the Hotel, where I discover the country’s Armed Forces Museum, a pavilion displaying a wide assortment of WW1 and WW2 tanks, artillery and aircraft.  Upon pick-up, we head straight to the University, where I set-up in a 46-seat presentation classroom, before taking a brief introduction tour to the Provost, the Physics Department Chairman, and the Geophysics Professor’s office.  We return in time for the noon program, where the Student Chapter executes a structured program, and Van-Dyke introduces me.  The room surprisingly fills to capacity as Petroleum Engineering majors and Physics Professors join the Geophysics Department for the lecture. After the lecture, I answer a range of questions, some technical, but others about how to get on a path to a career.  Clearly, employment is of key interest to these students who see most Geophysicists in the country as expatriates, and worry where the opportunity is for them.

Tuesday begins early, as we had agreed the night before to use this morning to “squeeze in” a bit of local sightseeing by traveling out of town to a popular weekend recreation spot for locals.  The guys pick me up at 8:00am, and after fighting a bit of traffic, we make our way out of town into the lush, green countryside.  The lonely, winding road we are on is only punctuated along the way by occasional villages, as common as anywhere in rural Sub Sahara Africa. These villages are hives of activity as children’s play and grown-up commerce bustle in the marketplace.  About 10km from our destination, we stop to give a ride to an elderly woman beside the road needing a lift.  She brings with her a 10 liter plastic container with her day’s wares of Palm Wine, to be sold to villagers and visitors at the place where we were going.  I shake her hand and introduce myself, noting that her gracious smile doesn’t hide the life of hard work that is evident in her hands.  Her skin is taunt and tough, worn thin but strong like leather stretched over a sinew skeleton. We began travel down a winding cliff-faced road and enter a deep ravine floored by a large lake.  This is Lake Bosumtwe, the remnants of a million year-old meteor impact crater. The lake is home to a number of surrounding villages that draw life from fishing and using its waters, and derive income from hosting weekend visitors. After sightseeing the shores, we depart for the long climb out of the ravine.  At the top, we stop for a few panoramic pictures, and meet an elderly gentleman who has need for a ride back to town for church.  It is on our way, and we oblige, but we are running late, so we do not stop, other than to drop him off at the local church.  The ride back is uneventful, until we get to town and encounter a worse traffic jam than when we had left.  Finally, while at a standstill 1/2 mile from the hotel, we decide to improve our options, and while they continue to fight traffic to get the vehicle to the hotel, I walk the route, now familiar from the previous day’s run.  I reach the hotel first, collect my luggage from my room and check-out before Cyril and Van-Dycke reach the hotel to meet me.  We then load-up and proceed to the airport where we say our goodbyes, and I check in for the flight to the next leg of this lecturer’s tour.

Akwaaba – Welcome to Accra! The flight from Kumasi back to Accra is smooth and uneventful.  Mark, a geophysicist with the Ghana National Petroleum Corporation, (GNPC), and National SEG Representative for Ghana, picks me up at the airport and delivers me to the hotel, only 10 minutes away.  This Golden Tulip Hotel is very up-scale, with a large swimming pool and exercise room.  It is decorated today, as are most institutions in Ghana, in black and red in 48-day mourning for their recently deceased President, John Atta Mills.  In the evening, the mild weather and gentle ocean breezes bring me and a crowd to dinner taken poolside, while a live band provides entertaining music for the evening. Jonathon, a GNPC driver, picks me up at 9:00am for the 45-minute drive to the GNPC offices in the city of Tema.  We travel down a well maintained, divided lane Toll Road to the Tema exit, and then to the ocean’s side.  Tema is a Port City, chartered by Ghana’s first President, and serves as the country main Harbor for import and export.  As such, the roads are full of trucking containers and are a bustle of activity.  GNPC has historically been located here since their founding, but they are preparing to move into Accra when the facilities under construction currently are complete.  This will put them in closer contact with their service providers and partners, who are dominantly located there.  At GNPC, Mark greets me and takes me to visit GNPC ‘s Chief Geologist, and then I reconnect with Manager Ferdinand, who had greeted me days earlier. The presentation room was set up well, and quickly filled with over 40 GNPC staff, (Geophysicist, Geologists, and Petroleum Engineers), Students from the local University, and staff from Tullow Oil, who are operators of Ghana’s largest Offshore Oil Field, “Jubilee”.  The talk goes well, and is followed by nearly 30-minutes of questions and answers.  We exit to the steps to the building where we take a group photograph of a core of attendees.

Ferdinand and Mark then take me to lunch at the Imperial Peking Restaurant before returning to GNPC offices where farewell greetings are made and a driver is arranged to return me to the hotel.  The next morning, the hotel will provide transport to the airport, where the short 90-minute flight from Accra to return to Lagos will end this first tour.