I actually made 3 trips into London during this visit.  The first was on a drizzly Sunday; the one day you can drive in central London without paying a congestion tariff.  We started out early and once reaching River Thames followed it on to London.  We saw the wharf (Rotherhithe) from which the Mayflower sailed and the clipper ship, Cutty Sark in Greenwich before stopping at Dickens Inn on St. Katharine’s Docks for drink and lunch.  We met some former Lagos expats and enjoyed catching up.  We then traveled on to London stopping to walk across London Bridge and see the Tower of London.  Back in the car past the London Eye, St Paul’s Cathedral to Trafalgar Square and to The Mall, however, the Mall was closed to vehicular traffic in preparation of the Olympics.  So we continued past Westminster Abbey and St James Park to Buckingham Palace.  Despite the rain and grey skies there were lots of tourists even though the Queen was not in residence.  That is when we discovered the Palace would be open to the public for 7 days only while I was in town.  So we booked tickets to see the Palace on the upcoming Friday. 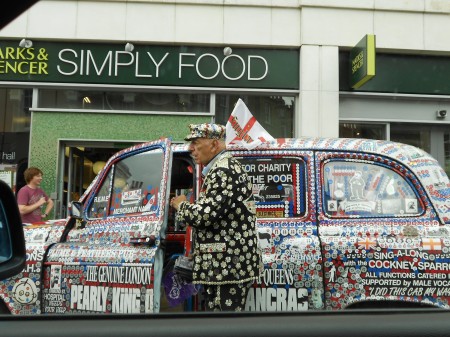 A Cockney Pearly King and his cab. 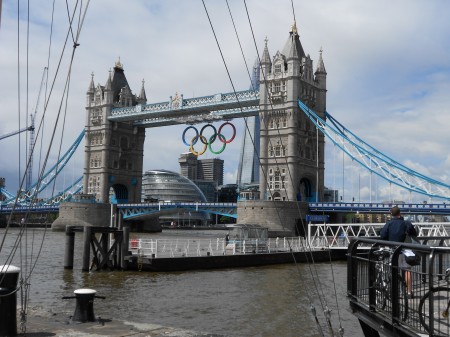 London Bridge ready for the Olympics. 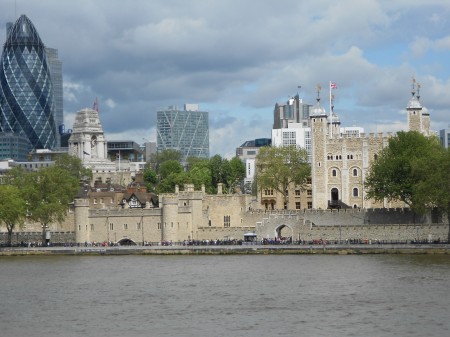 The tower of London. 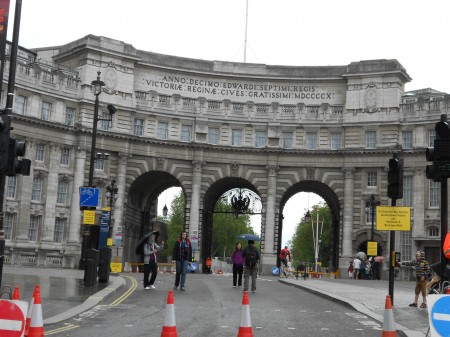 The second trip was by train from Wadhurst to Charing Cross, about an hour’s trip.  The purpose was to take in a matinee and we chose Ronald Dahl’s Matilda which was at the Cambridge Theatre.  It was a truly delightful production, so enjoyable.  We took a quick walk through the Coventry Garden Market before the show.   We also did a quick stop at the National Portrait Gallery to check out the royal family exhibit.  We finished the day with a Chinese dinner in Chinatown.

The third trip was also by train for a Day Out at Buckingham Palace.  We would see the Queens Gallery exhibit about Leonardo de Vinci.  Next we toured the Mews or what is the garages and stables of the Palace.  We saw the carriage Prince William and Katherine used in their wedding.  Since the Queen was out of town so were all of her horses but 2, they were to pasture for Holiday. Then we entered the Palace to see several of the state rooms and an exhibition of the Queens diamonds (in commemoration of the Queens Diamond Jubilee).  It is an awesome beautiful place, yet a working place as these were the rooms’ where the Queen greets and meets with visiting dignitaries.   But also these rooms display several of the Queens works of arts.  Unfortunately, no is allowed to take photos in the Palace, as it is not only where the queen works but where she lives.  The tour covers the first and second floor ending in the Palace Gardens. I feel so privileged to have had the opportunity to visit the Palace. London is a wonderful place to visit! 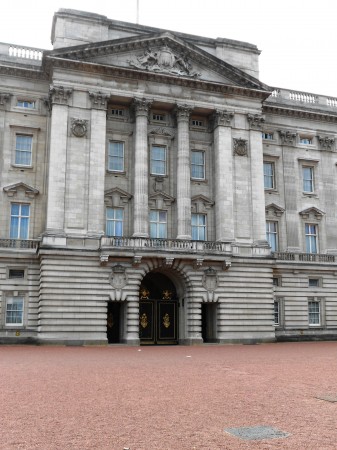 The rear lawn of Buckingham Palace!