Sunday mornings are a perfect time to wander the streets of downtown historic Lagos and not be run over by ocadas and traffic, or accosted by street vendors.  This Sunday morning we arose early to partake of a guided walking tour of the area of Lagos Island located in the vicinity of Rocky’s work location, where there are located the remaining areas of the Brazilian Quarter, Broad Street and the Lagos Marina, and which includes many of the remaining examples of the Independence Buildings of the 1960’s.  Our tour was conducted by LEGACY, the historical & environmental interest group of Quarter, Railway Compound and Ebute-Metta, who is attempting to preserve the culture and heritage of the Lagos area.

Our guide today is the well-known and respected Professor Godwin, who is accompanied by two of his students who share the guiding duties.   Professor Godwin is an expatriate that came to Lagos 1954, a country of new opportunities for a young architect.  Historically it is said that the first settlers to Lagos Island were from the kingdom of Benin in the 17th century.  During the next 2 centuries, the island was a stronghold of slave traders of Brazilian and Portuguese origin.  Lagos was then ceded to the British crown in 1861.  By 1902, London had invested a huge sum, £500,000, for a steam tramway, a central water supply and electric lights in the growing city. Therefore, it made sense that today we would start our tour by walking along Broad Street looking at various old buildings of Colonial and Brazilian styles that are from that era. 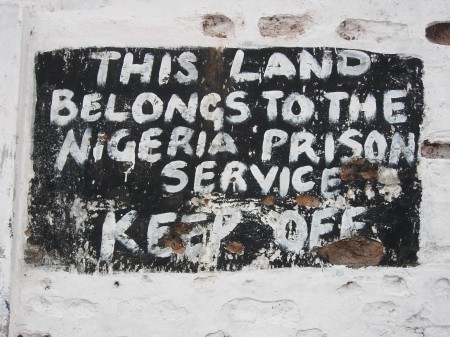 Our first stop was the Freedom Park site of the Old Broad Street Prison which operated from 1885 to the 1960’s and held some of Nigeria’s leading citizens who were opposed to colonial rule.  It was considered to be one of the finest prisons of its time, in that it served food and had a hospital.   Because of this, the prison had to be careful to screen returning work-day permit prisoners who returned each night, as local homeless would try to join them for a good night’s treat.  Professor Godwin recalls actually coming to this prison when his first child was born as the prisoners made the finest basket bassinets in the region, and he purchased one there for his first child. In recent times, the prison site had been left derelict, until it was commissioned for restoration by Lagos State Governor Fashola, as part of Nigeria’s 50th Independence Anniversary in 2010.  Now, it has been restored by a Nigerian architect, Theo Lawson.  A portion of the original prison walls were built in 1885 with imported bricks and which cost the colonial administration £16,000 at that time.  Now, those walls have been preserved and incorporated into the present facade. The 52 cell blocks of the prison, (each cell measuring four feet by eight feet), have also been preserved, but not as they once were when they ‘hid’ inmates from daylight. Today, they are flooded with light, left wide open with no doors and with walls are only about two feet high. The row of cells that were once known as Cell ‘A’ are preserved as stalls reminiscent of a market place. Cell ‘B’ sections is preserved as just mounds on the ground with skeletal cells above.  Finally, Cell ‘C’ area now hosts a metal ramp symbolizing a prisoner’s and a nation’s “walk to freedom”. There are two amphitheatres within the premises; one built in the area that held the original gallows for execution of prisoners, and the other built closer to the newer reflection pond that today ripples with catfish.  A gigantic obelisk rises from the center of the pond. There is also a food court where the prison kitchen used to be located. The records office where prisoners were processed before being allotted cells is now a modern building, which houses a museum with the earliest maps of Lagos and pictures of the prison in its  more ‘inglorious’ days.

From here we wandered west down Broad Street, stopping at the Government Printing press built in 1895.  The structure is built in a severe colonial style with massive steel beams to hold the large ¼ ton per-square-foot printing presses of the times.  It has multiple arches and large windows with decorative pre-cast concrete balusters on the veranda.

Next along Broad Street is St. Georges Hall.  (Yes, there were free masons in Lagos.)  This hall was built in 1906 by Sir Walter Edgerton, the Governor of the Colony and Protectorate of Southern Nigeria.  It is now rented by the local magistrate for court.

Sitting on the corner of Broad and Odunlami Street is the Bookshop House and Office Building which was built in 1973.  This building was designed by the architects Godwin, Hopwell, & Kuye (Yes, our tour leader Professor Godwin and his wife Jill Hopwell).  It is one of the few early buildings in Nigeria to have a façade correctly designed to exclude direct sunlight between the hours of 9am & 5pm for energy efficiency.  The special sun screens (sun breakers) and windows alleviate the effects of the climate with a 75% savings on air conditioning requirement for the office floors.  The building is dark at the bottom and light at the top.

In addition, a statue of Herbert MacCauley sits directly on the front corner. (Herbert was a politician, engineer, journalist, and musician and considered by many Nigerians as the founder of Nigerian nationalism).

One of the most sadly neglected buildings we saw by Balogun Square was the Ilojo Bar at #6 Alli Street and #2 Bamgbose Street, a treasure of Lagos Brazilian style.  It is actually listed a Nigerian Monument.  It was constructed in about 1880 and is remarkable in its design for its pointed gothic arches on the first floor and the small ceramic statue of a lady on the parapet.  Unfortunately, progress to preserve and restore the building has not yet been successful.  In this bustling market and densely populated area, we were the attraction to locals, and although we were told to avoid taking any pictures, the locals were busy taking pictures of us!

Along the way, we learned of Chief Daniel Conrad Taiwo who was well known in Lagos in the 19th century for his combination of commercial success and political astuteness.  He died at the age of 120 in 1905. His tomb, The Cenotaph, was designed and built by the famous Brazilian Mason Senhor Joas Baptista Dacosta and is characteristic of Muslim monuments.  The cenotaph has pinnacles with floral motifs and a terraced canopy.

Across the street is Bethel Cathedral, a church representing the African Anglicans who built it in 1928.

Next we hiked through a market area and past a street football match over to Balagon Street.  Here is the Lagos Central Mosque which is a replacement building for the original mosque of 1908.  This newer building opened in 1988.  Opposite of the mosque is the Sogunro Monument. It used to be located in an open area, but it has now been completely built over by adjacent buildings.  Fortunately, the handsome, life-size statue in marble is top lit within an enclave, and it still appears particularly dramatic to the observer upon first entering an otherwise squalid space.  The inscription still reads “In Loving memory of Chief Sogunro of Mahin (Paternal) & Egba Itoku (Maternal) extraction. “Oselu Ilu Eko”, a personal friend of and Chief Advisor to the late Ex-King Dosunmu and his immediate successor Prince Oyekan of Iga Idunganran.  Died 3rd January 1903. Aged 102 years R.I. P. “

Our tour covered many other interesting architectural gems, and left much more to explore, but churches were letting out, and navigating the busy terrain was becoming more challenging.  We therefore left the continuation of our exploration for another day.