Our Canyon Adventures began with a flight to Las Vegas and an overnight stay at the Desert Rose Hotel just off the “strip”.  There we met up with friends and family from across the country and from across the globe.  The entire excursion was planned and organized by our friend Cliff Crowe, who applied his expert geologic training to set us on a 2 week exploratory journey.

Our next morning, we (18 of us) boarded 3 SUVs and headed to our first park excursion – Zion National Park in Utah.  After arriving in Springdale and checking into our motel for that night, we ventured into Zion National Park where we hiked through ankle-to-knee-deep water upstream in “The Narrows” to a point where spectacular water carvings hollowed out the local geology.  We could have pursued even narrower upstream locations, but we retraced our steps to explore other parts of the park. 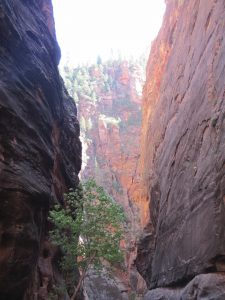 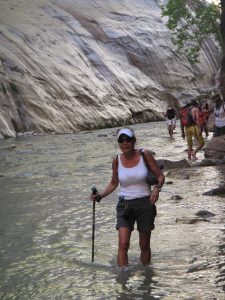 While most went to Emerald Pools, 5 of us decided to attempt to climb to “Angel Point”, even though we barely had 2 hours of daylight left.  The ascent was ~2000 ft. through mostly a well maintained trail, although composed of steep switchbacks.  However, the last ½ mile was scrambling over ancient dunes, climbing rock faces with the help of rail-chains, and tightrope-walking narrow ledges.  The views from the top were indeed spectacular and worth the effort.  With now time to waste, we made it down in just under 2 hours, just before darkness settled, and in time to catch the last park bus and make dinner.  It was an exciting but tiring day. 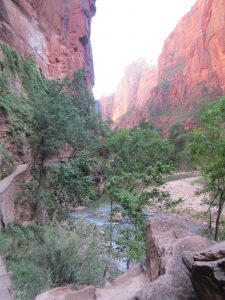 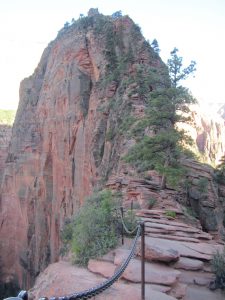