This week and next the American Club known as the GQ (Guest Quarters) welcomes the men and women of the USS Nashville, 400 strong to Lagos.  They were accompanied by the Navy Band (the Europe branch from Naples).  They are here as part of African Partnership Station 2009 (APS), the biggest maritime partnership program ever in Africa.  They have already visited Liberia, Senegal, Ghana and now Nigeria and will head to Cameroon next week.  The APS mission is seminars, workshops and hands-on training conducted with Nigerian sailors, including sessions on port security planning, small boat maintenance, medical training, search and rescue training and oceanographic methods.  APS is an international initiative under the auspices of Naval Forces Africa which aims to work cooperatively with U.S., European and African partners to enhance maritime safety and security on the African continent. APS provides a unique venue to align maritime engagements by utilizing an international team of expert trainers in a variety of military capacities and civilian fields such as fisheries management, port security and meteorology.  Here in Nigeria their travel has been somewhat restricted so the GQ opened the facility for them; swimming, a bazaar for shopping and American BBQ.  Rocky and I went to the GQ both on Saturday and Sunday, did a little shopping, listened to the Navy Jazz quintett

and conversed with the Navy men and women and ate American cheeseburgers.  Some sailors spent the day trying to access the internet (always an unknown), others were in the pool or getting a massage, some worked out in the gym and several were shopping at the bazaar 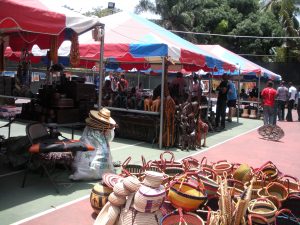 and learning what they could about Lagos and the culture here.  The crew has navy men/women enlisted less than a year to several that have been there 20+ years. The crew also do charity work while here. They donated school supplies and medical supplies to 2 of the American Womens Club charities. The USS Nashville navy crew and the marines stationed at the embassy participated in the Race for a Cure run, visited local schools, and allowed the scouts and other children groups to tour the vessel. The bar at the GQ was packed with sailors.  There were 40 vendors on the tennis courts and everyone appeared to be enjoying the sunny weather and the frozen margaritas! 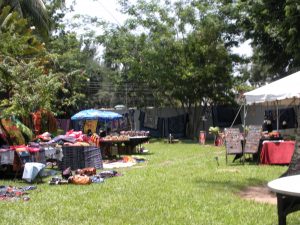