The next morning we moved to the Treetops Hotel room run by the Outspan, one of the most famous lodgings in sub-Saharan Africa.  In 1952, Princess Elizabeth of England and her new husband, Phillip – The Duke of Edinborgh, came to the Treetops among press and ceremony to visit one of the earliest places that valued viewing wildlife over hunting them.  During their stay, King George VI unexpectedly died, and Princess Elizabeth became Queen Elizabeth at the Treetops.  Kenya gained its independence eleven years later, in 1963, but always remained proud of their remarkable tie to the throne of England.

The original Treetops burned down but was rebuilt on the other side of the watering hole in the 1980’s.  Animals come to drink 24 hours a day at the site, which is a large rustic treehouse, built of trees trunks, with 2nd and 3rd floor rooms and a rooftop observation area – all hewn wood.  In the late afternoon, we took a drive through the local area, and came across Colobus monkeys, water buffaloes, waterbucks, a baboon, a black spotted hyena, warthogs, a giant forest hog, and numerous small antelope and other animals.

When we returned to the Treetops, we had dinner, and had no sooner settled in for coffee, than two young male elephants showed up.  They explored and drank, but then engaged in a ceremony of one elephant demonstrating dominance over the other, as the dominant male would not let the other elephant up the bank and out of the watering hole.  This play-battle went on for over an hour as the trapped elephant tried all sorts of means to out-flank or out-manoeuvre the one on the high ground.  In the meantime, the rain started, and apparently in an effort to keep dry, a Genet Cat, a small relative of the leopard, showed up under our doorstep.  This nocturnal animal is not often spotted by people, but apparently was comfortable being so close to us.

The rooms at the Treetops are equipped with an optional buzzer to wake you if activity at the watering hole picks up during the night.  We bedded down as the elephants left at midnight, and slept uneventfully until sunrise at 6:00am, when we had coffee, packed, and journeyed back to the Outspan Hotel for breakfast, and to meet our driver, Samuel, again.  By the way, today’s Rocky’s birthday!

After breakfast, Samuel drove north over the equator, where variation of the Coriolis rotation of water was demonstrated and the Equator Crossing was memorialised. 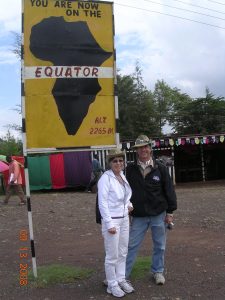 We continued north through the town of Nyahururu, home of Kenya’s Olympic Marathoners, and on to the northern tip of Aberdare Park where we visited Thompson Falls, discovered in 1878, with a vertical water drop of 283 feet into a tropical ravine.  Unfortunately, the popularity of the location has engendered a large, annoying contingent of local panhandlers, looking to provide any friendly service for a fee.  Although this type of activity is common in Lagos, Nigeria, it is the first time that we’ve seen such activity in the country of Kenya.

Road travel in Kenya is easy, as the major roads are generally in good condition, and lightly travelled.  They still drive on the left-hand side of the road, as learned from their British rule.  Every 40km, or so, are police roadblocks, (with nail-strips to insure that you stop),

checking for proper licenses and papers, and looking for illegal Somalia immigrants. Also, every town insures you slow down for their safety by having multiple speed bumps every 10 meters.   Gasoline is plentiful in the cities, but costs 105 Shillings per litre, (over $6 per gallon); therefore, most people walk, ride bikes, or take local buses.  Often, the road is lined with common telephone poles, but seldom are there any wires remaining strung between them, as the value of the wire greatly exceeds many people’s income, and it is often stolen for resale income.  For this reason, one sees hundreds of workers digging trenches by hand along the side of the road for 10’s of kilometres all over the country, in an effort to bury the future wires.  In addition, one sees no highway signs of any kind for the same reason – they are too valuable and will disappear quickly.