Each year the GOBA route features a different part of Ohio traveling through peaceful countryside and stopping at exciting tourist destinations.  This is the 24th year for the GOBA and my brother-in-law, AJ has ridden every year!  The highlights of the 2012 tour include 5 days of cycling 45-55 miles from town to town and 2 optional days of loops.  The terrain is considered “rolling with some hills” and primitive tent camping at fairgrounds, schools and parks.  This year I am joining the adventure with Pam & AJ.  Granted living in Nigeria there are more stationary bikes than the kind you ride out doors but I did train both inside (mostly)  and out  (a bit – the cobblestones of Banana Island are wearing) from May 1st onwards.

I arrived at my sis’s a few days early to test the bike out and to take a few short rides.  We rode the wonderfully paved bike trails in the area….what pleasure and smoothness!

The GOBA adventure began at 5am on Sunday morning (as we elected not to camp Saturday night but instead drive straight to the start line) with a drive to Hillsboro for registration, drop the luggage and start biking.  Well it was killer hills right out of the gate but then smoothly rolling hills for the first 13 miles when the rains started. It rained slowly but continued to gain on us till we came upon a beautiful old covered bridge.  Once under the bridge the rains stormed so about 200 of us cyclers took refuge in the bridge for 10 minutes or so…before heading back to the rain and hills.  After 3 hours the rain stopped and the roads turned into bicycle trails. We were cruising along with my goal to be in the park for the day by 1pm when sis noted a flat tire.  Pam & I had tubes but no pump, however a gentleman came along fixed the tire for us which is quite nice when it is just 2 girls out for a ride!   We made it to a beautiful riverside park in the center of Chillicothe about half past one.  We discovered our tent was up thanks to AJ, and headed to the shower trucks for hot water to revive us.   Afterwards, we found the closest bar for beer and nachos! Then it was time for a stroll around town, some coffee, read the local paper, do a little shopping and check out the local sights. 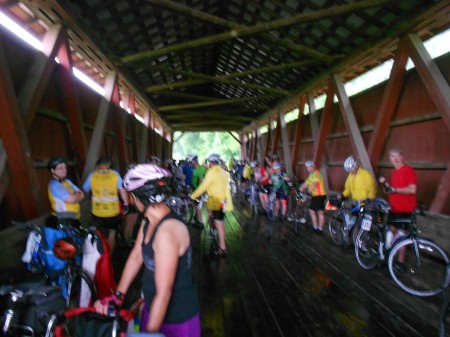 Leaving the covered bridge after the rain. This is a one lane bridge built in the 1800’s.

Monday was a rest day…or loop day.  We elected to bike to a local sight, the historic Adena Mansion & Gardens, and take a tour.  According to the town folk it was a 2 mile walk away…..somehow it took us on a 10 mile bike ride to get there….but it was a nice downhill ride 2 miles back to town & camp.  Later that evening we caught the GOBA Grand Prix races through the center of town.

Thus our daily routine was up at dawn, pack and take the tent down, load luggage into the trucks and on the road at 6-ish.  The temperature was predicted to by 93-95 degrees the rest of the week.  It sounded better to ride early versus in the heat of the day.  We rode paved county and township roads 90% of the time with very little or no traffic.  The scenery was stunning…..fields of corn, soybean or wheat with rolling hills of green and silos and windmills in the sky.  There were generally 3 stops: breakfast, lunch and pm snack.  Those stops were in parks, in schools and in fire stations with a variety of hot and cold food and drinks. However, it is difficult to each lunch at 930am so that became a water stop instead.  Beer and nachos are a great pick-me-up after riding.

The local libraries were generous with computer usage for email checks and most towns had bargains or discounts on meals or shopping. All of the towns threw traditional street parties with loads of food and bands playing. We saw the view that inspired the Great Seal of Ohio and the famous 7 bullet holes in the Washington Courthouse courthouse door.  We visited a bar in Ashville so overwhelmed by 2000+ cyclers that the locals stepped up to tend bar while the bartender became the cook, but boy was the food good!  We pedaled through a tunnel of trees on our way to Wilmington and ate Buffalo Wild Wings with AJ’s friend.  On the last day we visited a Lavender farm which was developing an earthen home out of the mud and recyclable products including tires, bottles and cans.

By the time we returned to Hillsboro, I was getting used to pedaling the hills.  At the finish we were greeted by an arch of bicycle parts and whistles and cheers.  The highlight was finishing the ride (for me ~ 280 miles) and never getting sagged.  Of course, screaming down a long hill at 31.2 miles per hour was definitely a heart racing milestone and a bit scary!  I am so looking forward to next year!

GOBAville the worlds largest moving town is complete with its own mayor.