After updating our supplies, the six of us set sail on the 26th of September, heading north for Tyrell Bay in Carriacou where we would be able to check out of the Grenadines. Along the way, we celebrated Alyson’s birthday, and Walt demonstrated his gallantry by rescuing her party-hat from an unfortunate gust of wind that carried it into the ocean. That night we grilled on the boat and spent time talking teaching Alyson and Walt the card game of Hearts. The next morning we arose early, and set sail for Clifton Bay in Union to check into St. Vincent and the Grenadines. We were met by two enterprising young men, (“Brooklyn” and Romeo), who ferried us ashore to Customs and Immigration, and with who we arranged an ashore catered lobster dinner in the Tobago Cays that night. After completing our business ashore, we left Union, made the short sail to the Tobago Cays where we spent the afternoon swimming with turtles and exploring the local islands until evening arrived. 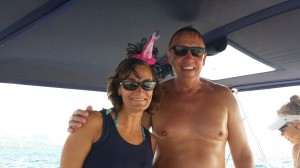 Then, we dressed in our best beach-ware and dingy-ed ashore where we were met by “Brooklyn” and Romeo who prepared us a huge grilled lobster feast with all of the trimmings and side-dishes. After returning to the boat, we enjoyed nightcaps and watched the stars and meteor showers before retiring for the night.

The next morning, Sunday, the girls made us a huge breakfast and we spent the whole day exploring the local area – checking out the sting rays, turtles and sharks, taking the dingy across the reef to explore a deserted island, shopping at a local beach vendor’s display, and catching three large conchs that we cleaned and the girls used that evening to make fantastic homemade conch fritters and conch ceviche! After dinner, we followed the New Orleans Saints game online and finished with an hilarious game of cards before calling it a night.

On Monday, September 29th, we reluctantly left the Tobago Cays in late morning, but not before picking up another 3 conchs on the way, and cleaning them as we sailed. Walt took the wheel for most of the trip to the island of Bequia, St. Vincent where we dropped anchor in Admiralty Bay and went ashore in Port Elizabeth for drinks at Maria’s, while we waited for Customs and Immigration to reopen to check out of the country. After handling these requirements, we returned to the boat for the highly anticipated “round two” of homemade conch fritters and conch ceviche, which we complemented with a fresh salad for dinner. Another relaxing evening of music, conversation, nightcaps and cards rounded out our day.
The next morning, the boys got the boat underway at 6:30am in preparation for a very long day’s sail from Bequia to beautiful Marigot Bay in St. Lucia – a 75 mile trip! Luckily, the winds were good to us, and with the boat healed and traveling at over 9 knots, we made our destination by 4:00pm, while introducing Walt and Alyson to a whole new level of sailing, which they very much enjoyed. The favorable timing allowed us to check in and out of the country of St. Lucia and to engage a local “dingy service” (“Liquid Sunshine’s”) to take us ashore for a sunset dinner at Doolittles, where we were serenaded by singing waitresses, and we enjoyed excellent meals of local delicacies, including swordfish and mussels.
The next morning, we left Marigot Bay about 9:00am, and headed for Martinique. Again, the winds were great, and we made the 30+ mile journey in about 5 hours, arriving in the port of Marin at about 2:00pm. Along the way, we were accompanied for a while by another pod of dolphins that played about the waves on our bow. When we arrived, we anchored in the bay off Marin, jumped in and swam in the local waters. Walt grilled hot dogs and sausages for lunch, and the afternoon degenerated in a discussion of sexual prowess and demonstrations of “winky” dances.

That evening, we went ashore for cocktails, (beers and wine), before returning to the boat for a dinner of grilled shrimp and chicken. That night, after days of playing “possum” at cards, Walt clobbered everyone with an overwhelming victory. The next morning (Thursday, October 2nd) we went to the fuel dock to top-off, and checked into our familiar boat slip for the night. This allowed us to check into the country, to say our sad “goodbyes” to Walt and Alyson, and to pick-up two new couples, Jeff and Debbie, and Rick and Mary Jane, who arrived later that afternoon. That night, our new group of eight all returned to our previously-visited onshore restaurant where we enjoyed great food and talked of our anticipated adventures. As usual with new arrivals, the drinking and partying lasted well into the night onboard our boat.