Our great adventure started with rising early (4:00am) in the morning of September 11th, driving 2 hours to Nikki & Peter’s in West Palm Beach and meeting them there to catch the Tri-Rail train to Miami Airport (a 2-hour train trip). From Miami, we flew to St. Thomas, U.S. Virgin Islands where we took a taxi to our hotel for the night near the Ferry Terminal. The day was long and travel was wearing on us as we prepared to travel to the British Virgin (BVI) the next day. On September 12th, we took the Ferry to Tortola, BVI, a 1-hour passenger ferry ride which prepared us for some of the rough weather we might see over the next 6 weeks. In Tortola, we met Bob who had flown in the night before and was staying at the motel associated with the marina where our rental bareboat was located. After lunch at Pusser’s, we climbed aboard our boat, “The Grande Plaisance III”, for the first time – a 53’ Jenneau from Dream Charters located in Hodge’s Creek, Maya Cove in the east end of the island. The boat was an upgrade from what we expected with power winches, power heads (toilets) and a bow-thruster. Our day was then consumed with preparation by the 5 of us (stocking food and drink, checking out of the country at Immigration & Customs) and “moving-in” and we spent that night meeting “neighbors”, swimming in the marina pool and getting excited for tomorrow’s departure.

On Saturday, September 13th, (Rocky’s birthday), at 9:00am, we left Hodge’s Creek and the BVI, and set a heading for the overnight 140 nautical mile trip across open waters to the port of Charlestown on the island of Nevis. The winds were good from the east, and the boat performed well traveling at ~8 knots. That night, the skies were clear and the half-moon-plus rose in the night sky at about 10:15pm. Bob, Rocky and Peter took overlapping 4-hour shifts throughout the night with two people on the helm at all times. Everyone on deck wore harnesses and stayed “clipped-on” to our boat-long “jack-lines” which we rigged for safety during night sailing. That night, we passed 3-4 squalls beating us with winds and drenching anyone on deck. Nikki slept below, but Julie was feeling a little queasy and stayed with the boys up-top trying to stay dry and to catch a little sleep. In the night, we passed the lights of the islands of Saba, St. Eustace and St. Kitts – places we would consider stopping upon our return trip.
We arrived at Charlestown, Nevis on a beautiful Sunday morning of September 14th at about 9:00am – earlier than we had planned. After checking in and out at Immigration & Customs (which required calling their staff into the office and allowing us the opportunity to have a few drinks while we waited for them to arrive), we took note of some issues that we encountered during the night. It seems that a couple of the “cars” that guide the main-sail up and down the mast were damaged, and we were having problems with the engine electrical system where the battery would drain unless we ran the engine to charge it every 4 hours. We decided to try to work through these for the next few days. For lunch, we went ashore to eat at Mr. Sunshine’s – a little beach bar & restaurant that we had heard of. We had a wonderful lunch, celebrated Rocky’s belated birthday, took a look at the local “pet” monkeys there, and headed back to the boat where we had dinner, (birthday) partied on-board and prepared for our trip’s next leg.

At 8:00am the next morning, we left Charlestown and set course for Little Bay, Monserrat, a “short” 33 mile journey. The island of Monserrat had never been visited by any of us before, as t had been off-limits in the past due to a 1997 serious volcanic eruption of Mount Soufriere that caused the island’s evacuation. At the time, 11,000 residents inhabited the island (under British control) that saw it being evacuated and its Capitol being buried in volcanic ash. Today, that end of the island is still a wasteland, and only 5,000 residents returned. We arrived at Little Bay, Montserrat at 3:00pm, and after checking in and out of the country, ran across a gentleman who ran a little bar and restaurant at the head-rocks to the Bay – John Pont. John had built his restaurant – his dream – by hand and had been evacuated to England for 10 years, but now he was back and he offered to open-up for the night just for us five. We came back that evening for drinks and snacks and he even drove Peter to town to get ice for our boat’s refrigerator. His establishment is in a spectacular garden setting with a deck built out over the rocks of the water’s edge. John proved to be one our favorite new acquaintances that we made along this trip.

The next day, Tuesday, September 16th, we left Monserrat at 7:00am and sailed the 60 nautical miles to the city of Basse Terre in Guadeloupe at a brisk pace. We arrived at 4:00pm, and this was our first encounter with a French island, where Peter’s “pigeon” French contributed greatly to our success. Immigration & Customs at The Barracuda Restaurant was closed but that only allowed us the opportunity to have drinks and eat dinner there. It was also here that we encountered our first serious problem with the boat, as the engine battery died and the engine could not be started. After consulting via phone with Dream Charters, we jumped the engine to the domestic batteries and started the engine, but we decided to divert the next part of our trip to get these problems resolved. Therefore, the next day, instead of sailing to Isle de Saintes, as planned, we motor-sailed around the island of Guadeloupe, to the southern major port of the island at Pointe de Pitre, where we took the boat into a temporary marina slip near the major cruise-line dock, so that they could replace the main-sail “cars” and the engine battery. This was completed in a very timely manner, and so we then left Pointe de Pitre that afternoon and sailed to Petit Havre, Guadeloupe, arriving at ~5:00pm. Tired and drained, we took swims, showers and ate at a restaurant onshore.
The next morning we rose early and set sail for Roseau, Dominica. Because we had not spent the night further south in Isle de Saintes, we had a long trip to make of about 60 miles to get back on schedule. Luckily, the winds we again favorable, and sailing along this leg at ~8.5 knots, we were joined by our first pod of porpoises, riding along our bow-wave for a number of minutes. We anchored just offshore near the cruise-line dock, went ashore for Immigration & Customs check in and out, picked up supplies, and headed back to the boat. Here, as in most of the islands, the town’s markets and stores were not really geared to be open for tourists, yet, as their “high” season doesn’t start until November 1st. Therefore, we cooked and ate on-board, and we left the next morning at 7:00am to head to Martinique.
Fort de France in Martinique was a 50-mile sail which we did in 9 hours, arriving at ~4:00pm. Here, we found a vibrant little town with a beautiful park and little shops. We checked in, explored town and found a nice bar/restaurant where we sampled local snacks and drinks into the evening.

The next morning was Saturday, September 20th, and so we made a short sail down the coast of Martinique to the city of Marin, where we had a marina slip waiting for us, allowing us to fill up on fuel and water, and pick up our first guests, Terry and Elaine. We arrived at the Marina at 9:00am, and it was a large, well run facility with eateries, laundry and showers, which we used extensively. The grocery stores were accessible with a marina free shuttle, and we were refreshed to welcome our guests who arrived that afternoon. After settling them in, we all went to dinner at a nice restaurant on-shore, and then partied and talked on the boat until the wee-hours of the night. Tomorrow would start the second part of our journey, now with 7 people on-board. 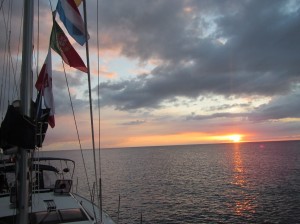