When we returned from Carnivale in Brazil in February, we noticed for the first time a new dock with a boat on Victoria Island near the embassies.  The boat was a gorgeous, new ~110’ Sunseeker Predator, whose hull is made of gleaming black fiberglass. 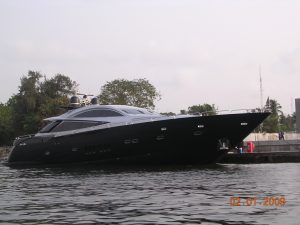 Rumors abounded throughout the Expat community about whose it was and what it was doing here in Lagos.  And thus it continued until recently when, while at the beach house, we struck up a conversation with a passing couple who just happened to be associated with the big, black boat.  It turns out that the boat is the recent purchase of the owner of a local Nigerian Oil Company, who has brought it here to his offices and home, along with a small operational crew.  Currently, the boat is limited to the area of the waterway in front of our apartments, since tides and shifting sands have now trapped it there until a new channel can be dredged.  After crossing paths with these people a couple of other times around Lagos, they invited us to take a tour of the vessel – And so we did!  We were blocked at the entrance to the docks by security guards with automatic weapons, until we were met by our new friends, who escorted us aboard.  It is a high-performance yacht described by the Sunseeker as “hedonistic”.  The boat is outfitted with a hot tub on deck, multiple bars, a huge salon living room and dining room with ~50” electronic concealed TVs, and surround sound.  It is powered by three 3000hp diesel motors that will drive the vehicle at up to 46 knots, slurping up its 11,000 liter fuel capacity in a matter of hours, (~$4000 per fill-up).  It sleeps 8 guests in 4 huge staterooms, and sleeps another 4 in its crew’s quarters.  Everything is electronically operated, from the window shades, to the security cameras, to the dual bow and stern side-thrusters.  Sadly, the owner seldom has the chance to use it, as he has other demands on his time, and this is only his latest “toy”.  It truly was a beautiful vessel, and Julie and I would gladly take one as a gift, if anyone is so inclined!

Julie at the bridge… 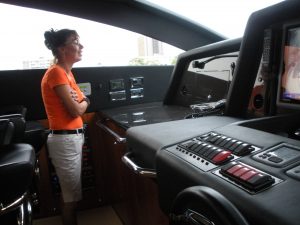 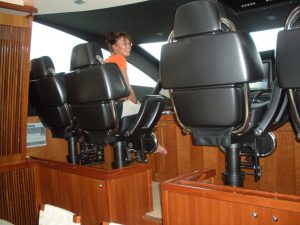 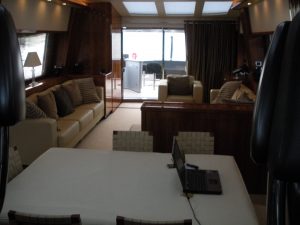