This morn, Thursday, September 2,  the 12 Mt. Kilimanjaro climbers departed for their long drive to Moshi.  The German party at our camp also departed leaving just the 4 of us for a morning game drive into the Serengeti Park.  At the camps entrance was a herd of Tope and Zebra.  We took a different route that previously traveled crossing great vistas of plains with the horizon miles and miles away.  For the first time the spotting of animals was sparse. We saw Giraffes with 2 males wrapping their necks around the others neck – a sign of aggression our guide Darimo stated.  We saw a hyena in her hole hiding babies from sight and we saw herds of Antelope and Hartebeest.  We returned to camp for lunch where we found a beautiful salad awaiting us.  After a siesta we packed our bags and headed north to the Ikoma area of the Serengeti.  We stopped for a break at the hippo pool which had more than a hundred hippos lying on their sides and on top of each other. This is a stagnant water pond that is formed at the meeting of 3 rivers.  The behavior of the hippos has evolved due to protection of the calves against crocodiles (we saw 3 on shore) and to accommodate the maximum number of bodies. It was fascinating to listen to them as when they are submerged hippos make a resonant honking call.  When they are on land hippos are silent.  We reached Ikoma Wild Camp at dusk.  It is located just outside the Serengeti in the Grumeti Game Reserve.  The camp itself lies between two kopjes (bizarrely shaped rocky inselbergs protruding from the underlying plains).  This is a permanent tented camp with 11 tents built on stilts into the rocky hillsides and 10 bandas (traditional round huts) with a large dining tent.  We were welcomed with hot towels and coffee.

We are off this Friday morning with a box lunch and a quick stop to pick up Ranger John complete with an M-60 gun at the local ranger station.  We are headed north to the Tanzania/Kenya border hoping to see the great migration.  We will be driving through several villages of native tribes.  There are over 120 different tribes in Tanzania. Ranger John is with us as we will be traversing in and out of the Serengeti and through some wildlife reserves and hope to cross into Kenya.   As we head north the terrain becomes hilly and rocky, the plains are gone.  This area is quite agricultural as we see fields of Cassava and Aloevera bordered by Cissel (the rope plant).  We see our first elephant skull.  We reached the Mara River and the crossover to Kenya.  The Ranger station at this junction has posted a “no crossing” warning as the water is washing over the road is fast and deep.  No vehicles will be allowed to cross today.  So we settled on the banks of the river for lunch watching crocodiles and hippos and storks.  There are no wildebeest or zebra at this area of the river.  On our return to Ikoma we see sugar cane.  We met a young camp volunteer from Germany.  Natasha is 19 years old and preparing to go to University.  She has traveled Europe with her parents and spent a year in Australia as an exchange student.  Now she is at Ikoma for a month doing all the same chores as any camp trainee would.  Yesterday she was on greeting duty, today the kitchen.  During her month here she will get out on safaris about 4 times in addition to learning how the camp works and learning Swahili.

Saturday begins with a game drive traversing in the Serengeti.  We are greeted by a Black Back Jackal, the first this safari.  The big surprise was the sighting of a cheetah and her 4 adolescent cubs.  Mom hid under dense scrub brush and a tree while watching her 4 cubs.  We watched her cubs inspect our vehicle before lying in the sun.  We watched them for at least 30 minutes and were so pleased with this find.  Then 5 minutes later we spotted a lioness with 2 cubs.  Out in the middle of nowhere the car suddenly made a loud metal dragging sound.  Upon stopping we discovered a weld that held the running board on had broken and was dragging.  There were no other people or vehicles around so AJ and Darimo assessed the issue and ended up using AJ’s luggage strap to tie the running board up and hooking the luggage strap to the front passenger seat belt and down the road we went.  We passed Massi warriors (young men ages 14-17) with white painted faces and ceremonial dress.  They were headed off to their circumcision ceremony.  A few hours later we arrived at the top of a sunny Ngorongoro Crater.  The view is breath-taking and the road down steep.  It is 2000 feet to the crater floor.  The entire crater is a conservation area with no residents or lodges and is a world heritage site.  Ngorongoro Crater is the largest unbroken ancient caldera nearly 3 million years old.   Once in the crater we saw fox, water buffalo, cranes, hyenas, flamingos, zebras, wildebeest, gazelles, impalas, elephant’s, eland and a variety of birds.  While some of the animals migrate in and out of the crater the majority of them live in the crater year round.  It was very windy in the crater and because of the wind we never saw a rhino which was rather disappointing. We ate lunch in our vehicle as the fish eagles by the lake like to dive and take people’s food.  As were preparing to depart we were lucky enough to find a lion and lioness mating.  We celebrated our day with drinks and popcorn at the Highview Hotel.

This morning we were greeted by Darimo who has repaired the car and presented a clean luggage strap to AJ.  We headed off to Tarangire River and Park stopping at the Lake Maryara overlook to snap pictures.   Tarangire National Park is fiercely hot with dusty red roads and dried straw grasses.  The wildlife here is migrating to the water.  It was so cool to witness a line of zebra and wildebeest snaking from the horizon to the front of our vehicle as the animals crossed to get to the river; a constantly moving line of animals.  This park has the greatest concentration of wildlife outside the Serengeti.  It is here we saw storks, vultures, turkeys, and the kori bustard (the heaviest flying bird).  We saw massive Baobab trees and lots of tsetse fly (annoying biting things!). 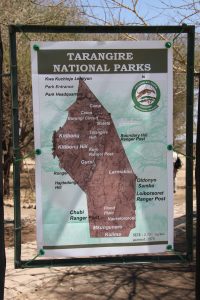