The occurrence of the Eid al Malud holiday on Tuesday gave an opportunity to jet from Lagos to South Africa’s Kruger National Park to search for yet unseen African wildlife.  Kruger Park is South Africa’s oldest National Park, created in 1898, but more recently the park has grown to combined government refuge lands with local, private game-parks to form South Africa’s largest National Park today.  We decided to go to the Sabi Sands area on the northwest side of Kruger towards Mozambique. The Sabi Sands area is known for exceptional game viewing and first class accommodations in the bush.  It is a collection of privately owned lands that were originally targeted for cattle grazing, but were returned to being a wildlife refuge when Tse Tse flys and other pests decimated the herds.  Today, it houses a sparse number of small, privately operated lodges and we were guests at the Simbambili lodge.

As is usual, our trip began with the obligatory ride from Ikoyi Island in Lagos to the Murtalla Mohammed Airport in Ikeja, a normal 30 minute drive over the world’s 3rd longest continuous water-crossing bridge.  However, this day saw a typical unexplained and unexpected traffic jam that turned a 30 minute trip into a 210 minute trip.  Luckily, we had left plenty of extra time, and still made our overnight flight to Johannesburg without any issues.  Once we landed in Jo-burg at ~5:30am, we transferred to a domestic flight on Airlink Airlines to Nelspruit, a very nice and rustic, recent World Cup port city on the southwest side of Kruger Park, where we were met by local auto transport for the 2 ½ hour drive north to Sabi Sands. 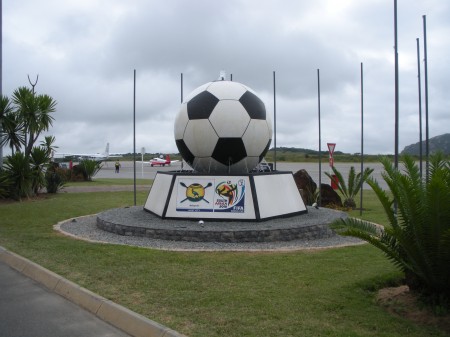 The Simbambili Lodge (Simba = lion, Mbili = two) is situated on the banks of the Manyeleti River (which only flows water during flash floods) and overlooks the Manyeleti Flood Plain.  It has been as a Guest Lodge since 1997 and although all Big Five animals (Lion, Leopard, Elephant, Water Buffalo, Rhinoceros) live there, it is especially known for Leopards and African wild dogs.  The Lodge consists of 8 guest suites, each with their own viewing deck, private gazebo and plunge pool, 1 family suite, a wonderful viewing deck, and a range of 1st class amenities.  We were warmly greeted by the Lodge Manager and staff, informed of the typical daily schedule, and guided to our suite to unpack and freshen up.  The typical day at Simbambili starts with a knock-on-the-door wake-up at 5:00am for a quick coffee and a morning game drive until 9:00am.  Upon return, it is time for a leisurely breakfast, and the day is free until lunch at 2:00pm, followed by a late afternoon game drive from 4:00pm until 7:30pm.Dinner is at 8:00pm and drinks can be had on the public viewing deck or in the privacy of one’s own suite.  We were one of 3 couples currently staying at the lodge. 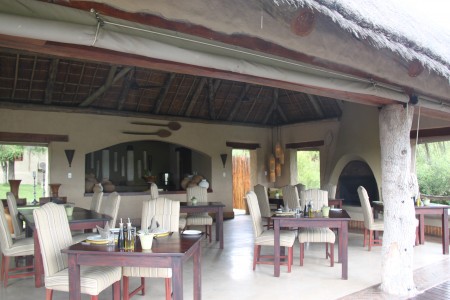 We arrived at noon, unpacked, had lunch and prepared for our first game drive.  The game drives are part of the lodge’s package, and include dedicated game rangers and trackers to guide you in the bush.  The vehicle was a brand new Land Cruiser that seats 3 rows of 3, theater style, in an open design that has no walls, doors, or roof.  The tracker rides on a front-bumper mounted jump-seat so that he can get a fresh look at any tracks of signs of wildlife.  Our first game drive revealed an area very different than those we had experienced in Kenya and Tanzania.  The Sabi Sands area is characterized by relatively thick and lush vegetation, including trees, bushes and tall grass.  However, the vehicle allowed for off-road excursions into the bush whenever the experienced ranger and tracker had good cause.

Our ranger-driver for the week was a South African named Matt who was as knowledgeable as any guide we had ever had.  Our tracker was a gentleman named Doctor, who was also an apprentice ranger.  Together, they were an outstanding team at locating and approaching wildlife in this challenging environment.  We began our first game drive by approaching a small herd of 4 water buffalos that were cooling themselves in one of the abundant water holes.  Matt stopped 30ft away from the dominant bull, who was not happy with us being there, and stalked the back of our vehicle, until at 15ft away and very unhappy with us caused us to think better about staying any longer and drove us to move on.

The area included many birds (hornbills, Walberg eagle, beaver birds) and herds of antelopes, gazelles, water bucks, bushbucks, kudus and zebra. Soon we came to an open area where a lone female impala was guarding her fawn, but she was nursing a huge wound on her side where claw marks and bites could clearly be seen.  She would not last long in this predator-filled area!

Further on, Matt and Doctor located a young male leopard in the bush stalking a group of gazelles.  We went off-road and shadowed the2-year old leopard as he slowly tried to position himself closer to his quarry, often leaving him only 10ft away from us!  Matt explained that the predators often took advantage of “the cover” that our vehicles provided as part of their stalking strategy.  We followed in the bush until the leopard finally decided he needed a new and better view.  Expecting this, Matt positioned us under an opportune tree, and the leopard obliged by coming to us, jumping up into the tree’s trunk and climbing onto a branch only 10 ft above our heads!  From that viewpoint, we watched as he groomed himself and tried to get something out of his mouth.  His excessive salivating while we watched made us a bit uncomfortable, but we were assured we were in “good hands”.  Finally, we left and traveled to a dammed pool where a small group of Hippos were keeping a wary eye.  We stopped on the shores for a very civilized drinks and snacks, and a bit of stretch after our leopard encounter.  A tin of beef jerky, sweet potato chips and mixed nuts later, all washed down with a round of gin and tonics, we were back into the Cruiser to watch the sun set and continue our safari.  Around the corner, we came upon small herds of elephants grazing, and majestic giraffes.  As daylight failed us, Doctor took out the vehicles portable spotlight and scanned the bush for any unique nightlife while we traveled back to the lodge in the dark.  We returned at 7:30pm to a wet washcloth and a glass a glass of Port, before washing up and returning for dinner.  Dinner tonight was around a campfire in an area adjacent to the lodge, where we were served salads, and our choice of chicken, lamb or kudu, with crème brulee for desert.  It had been a long first day for us, so it was time to be escorted to our suite and then off-to-bed in preparation for tomorrow’s 5:00am wake-up.