Although this is a blog about our experiences in Africa, we think of Brazil as a “sister” country to Nigeria.  After all, they were connected millions of years ago before the continents rifted apart.  And if one is going to visit Brazil, what better time than at Carnivale, and what better way then by sailing the coast between San Paulo and Rio de Janiero!  So, for the last 2 weeks of February, Rocky and Julie flew from Lagos, Nigeria, through the U.S. to South America.  We planned this trip as part of a group of 16 wonderful friends, and bareboat chartered 2 monohull sailboats, (47’ & 41’), and 1 catamaran, (44’). 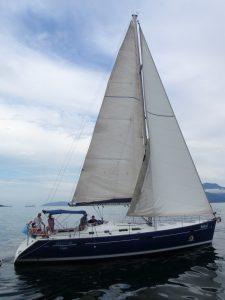 We spent 3 days getting from Lagos to Rio de Janerio via Houston, where we could spend some time seeing old friends, and gathering a few supplies for the trip.  After arriving in Rio, we took chartered vans to the marina in Angra dos Reis, (the “Area of Kings”), provisioned the boats, and left looking for adventure and discovery.  On Day #1, as we crossed the warm waters of the bay looking for wind to fill our sails, we encountered a very large school of dolphins (~50). As we motored along the dolphins dove and rode the waters next to the hull off the boat.  Then the dolphins started jumping and splashing us, and showing off for our cameras.

It was an hour of fun for them and us, and was a positive omen of the good times to come on this journey!  We will not recall all of the adventures of the trip here, but simply summarize our impressions and highlights of the country.

Brazil is lush, green mountainous country with a rocky coast and row upon row of mountains rising on the horizon inland.  Although it was raining on the day we arrived, it soon got sunny and hot (~95 degrees F), and remained that way the entire rest of our trip.  There was not much wind in the mornings but we had some fine sailing in the afternoons. 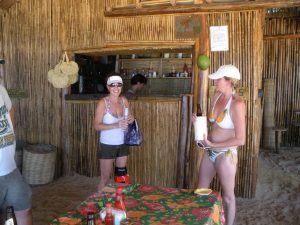 Evenings on the boat were cool, although the temperature onshore remained hot and humid.  With the wonderful weather, we took every opportunity to sight-see villages and anchorages along the coast and to snorkel among the rocky shores. 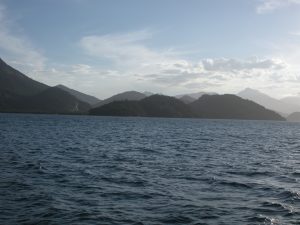 During mornings, we ate breakfast either ashore or collectively on the boats at anchor.  We would then head off to a new location where we would meet up for lunch, either at a beach or anchorage. 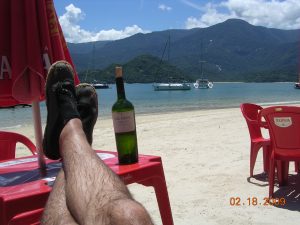 Afternoons were spent sailing until dark, when would usually “raft” the boats together in a new-found bay and either eat dinner ashore, or collectively grill and “socialize” until the wee hours of the morning. Every day was a new collections of sights, places and experiences, interspersed with a few special stops described below.

Parity – One of the first locations we wanted to visit was a very old town at the southwestern edge of the area called Parity.  This was the original port village from which silver and riches were taken from the country back to the old world in the east.  The city has preserved the “old town” area, where motor vehicles cannot travel; where the roads are laid with enormous cobbles; and where even the donkey carts struggle to navigate the streets.  It is a collection of shops, open markets, restaurants and churches, each constructed or restored to its 16th-17th century status.  We took slips in a nearby marina, and spent the day exploring the town, 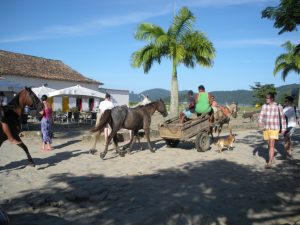 enjoying the sights and sounds from an outdoor café overlooking the bay, and starting our shopping.  During the evening, we ate seafood and beef at a wonderful family restaurant, highlighted by local wines and friendly service.  Our sadness at leaving this town was only highlighted by the fact that we wished we had made it back there, but the rest of our adventure lay to the northeast – toward Rio.

Angra dos Reis – After a few days and nights exploring the western coast of the bay, and the bay side of Isle Grande, (an enormous island that protects the entrance of the bay), we stopped back at the marina to port for the night, update our supplies for the upcoming long journey, and to secure final approvals to take the boats 90 miles to the east to Rio.  The Verolme Marina operates next to a large shipyard that was working on two enormous jackup drilling rigs to be used in the booming oil & gas industry off the coast here.

This port town also serves as the national oil company’s, Petrobras, center for offshore operations, and therefore, the city of Angra is a vibrant, growing community.  While we were there for the night, we decided to travel via taxi into the central part of the city for dinner, (the cab driver’s brother’s restaurant?), where we were left at a local seafood restaurant in the middle of town.  We took a table outside in the courtyard overlooking the street, ordered our meals, and were pleasantly surprised as a “Blocko” can passing by us!

Blockos are carnivale street-parades that are usually founded by a neighborhood group, who arranges traveling musical entertainment and a large number of costumed Samba dancers, and are joined by revelers singing, dancing, and traveling down the street.  Everyone was friendly, joyful and entertaining – a small slice of the local festival season, as seen from a local point of view.

Rio de Janiero – The long journey to Rio starts with an anchorage the night before at the eastern most bay of Isle Grande.  Since there are no ports between Angra and Rio, we needed to plan for a trip that would leave as much margin as possible for potentially unfavorable conditions or equipment breakdowns.  We estimated that the trip would take 10-14 hours, and that we would convoy the boats together up the coast.  We left anchorage at 5:00am, and for the first time on the trip, everyone stayed alert, (and sober), for the day’s journey.  However, all went well, and it was a remarkable hour at 3:00pm as we motored along Rio’s famous beaches of Barra, Sao Conrado, Leblon, Ipanema and Copacabana, waving to the throngs on the shore.

Our Catamaran sailing past Copacabana Beach

We then spotted the world famous landmark of Cristo Redeemer on Corcovado above the city, rounded Sugarloaf Mountain and sailed into Marina Gloria to our slips in the city. 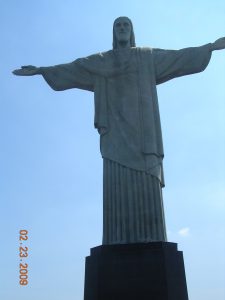 From here, we spent 4 days in the city, exploring the beaches and restaurants, shopping and seeing the city’s famous sights.  The beach is everyone’s favorite destination, and Brazilians spend as much time there as possible with as little on as they need.  Although the beaches are numerous and very large, there is barely room to walk to make your way to the water.  Other highlights while there included a marathon jeep tour, which took us through the sights in the city into the middle of another Blocko in the area of Saint Teresa, allowed us to visit Cristo & Jardin botanical gardens and waterfall, and allowed us to watch the landing of parasails off the mountain onto the beach. 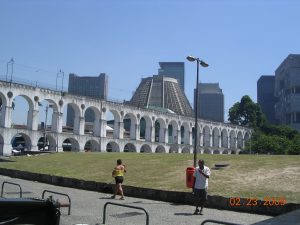 Aquaduct and church (the triangluar structure)

Copacababa Beach – a mass of humanity

On Sunday night before Mardi Gras, we all traveled from the marina via Rio’s excellent subway system to the Sambadromo, a dedicated facility just for Carnivale’s Samba competition.  The competition involves 12 Samba Studios that compete on two nights, (6 each night – Sunday and Monday).  They have ~75 minutes each to “present” themselves to the judges and the crowds of 10’s of thousands in the Sambadromo stands, (and 100’s of thousands outside), that have gathered.  Each Samba Studio’s presentation includes traveling up the Sambadromo 8-lane-wide avenue, with ~6 huge, animated, elaborate floats interspersed each with groups of ~500 Samba dancers in ornate feathered costumes, all while the same 30 second Studio samba theme booms over the speakers.

During the presentation, everyone stands, waves the Studio’s flag and sings their theme’s words in their support.  The presentations start at 9:00pm, and at ~85 minutes each, with ~15 minutes between each, take until daybreak the next morning.  We left before the end at 5:00am, and the crowd had lost little of its numbers or energy level!  It was definitely an experience like no other in the world!

Porto Frado – We regretfully left Rio for the long day’s journey back to Angra dos Reis.  After an uneventful return, we did, however, have time to explore a few other interesting ports, one of which impressed us most, was a resort at Porto Frado at the southwestern end of Angra.  By this point, our boat was on our own, and so we decided to explore some poorly defined areas on the map.  The resort at Porto Frado is recent, and is now home to one of the most impressive collection of opulent yachts that one is likely to come across.  Apparently, wealth, (legally or illegally obtained), is difficult to export from Brazil, and so many of the areas wealthiest opt to purchase ridiculously huge, (100’ to 200’ long), custom yachts, outfitted with every convenience known to man, to which they helicopter in for a day’s relaxation or evening dinner.  We, on the other hand, took a mooring ball away from the dock, but ate dinner at their local dockside restaurant, people-watched, and toured their facilities and shops. 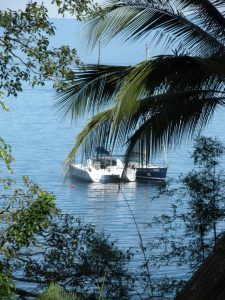 From there, we sailed back for a last night at port in a little fishing village on Isle Grande, where we purchased ~10 lbs of fresh shrimp.  With the last of our veggies and grilled on the barbeque, we ate our final dinner in Brazil, as we watched the sun set over our stern behind the mountains on the mainland.

Tomorrow, we would return the boat, and begin the long series of flights back to Africa.