Pilanesberg National Park is one of the third largest national parks in the Bojanala Region of southern Africa.  This unique area is encircled by four rings of hills, a geologically fascinating complex which was produced by volcanic action millions of years ago.  This park is a malaria-free reserve. It is home to over 7,000 animals including the big five (lion, elephant, leopard, rhino and buffalo), as well as over 300 bird species.  It is unique in that one can drive one self through out the park. This park also allows hot air balloon safaris early in the morning (3:30am). During the course of our day we saw, baboons, bushbucks, elephants, giraffes, hippopotamus, a brown hyena, impala, a jackal, kudu, warthogs, waterbucks, blue wildebeest, and zebra.  In our several safari trips we had yet to see a rhino and here we were rewarded with seeing 4 white rhinos including a baby with her mother. 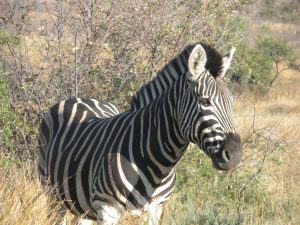 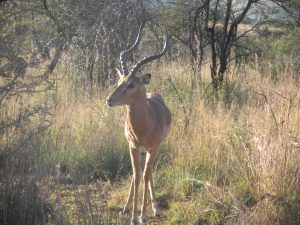 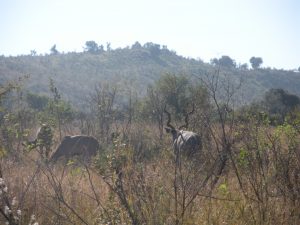 Kudu – look at the horns on the male! 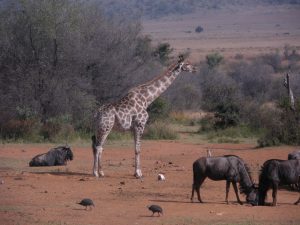 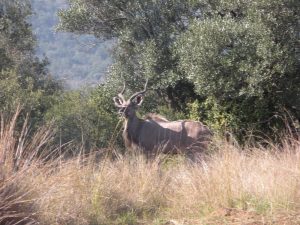 Elephant crossing right in front of the car.

Zebra – look at his colors! 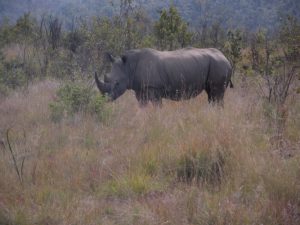 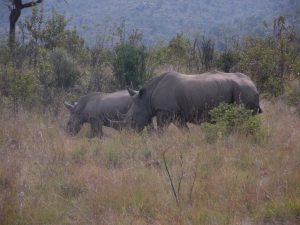 White Rhino with Baby – like elephants this mother always kept the baby shielded away from us.

Munching away – they are BIG!

Yes, the Rhino got very close to the car, however, we pretended to be a rock and waited for them to move on.  They were fascinating to watch.