The only passion that arouses a Nigerian nearly approaching that of football (soccer) is Politics.  Engaging the locals in a political discussion of which party to support, who is the least corrupt, which candidates are frontman and which are real and who might win could consume all day – but be ready for some yelling and ranting!  Nigeria in April of 2011 was in the midst of National and local elections.  The original plan was to hold Federal Legislative elections (Senators and House of Representatives) on April 2nd, Presidential Elections on April 9th and State Elections (Governor) on April 19th. Installation of all offices is set for May 29th.  The Government has spent 3 months sending agents into every field and village with laptops registering all eligible voters.  Where you register, however, is where you must vote, as these same lists will only be present on election days when identities will be validated and votes cast.  This is the first National election in Nigeria in 5 years, and if African History is any guidelines, we know to expect the unexpected.

Friday April 1st – no, it was no joke, tomorrow would be a restricted movement day with NO vehicles allowed on the road between 8am-6pm, and only registered voters allowed as pedestrians to gather at the polling places.  We met with friends this Friday night preparing for tomorrow’s lock-in, and observed early political gatherings that were already underway.  Around the corner from us is the residence of a Senatorial Candidate, the Honorable Mrs. Oluremi Tinubu, where 200-300 campaign workers were already waiting at her gate.  Some will drive the campaign, some will gather voters, and some will offer to sell their vote for a nominal sum.  It is politics in Africa!

We holed up at our residence, organized a Saturday barbeque, and used the lock-in on Saturday to catch up on those Spring items that need to get done around “the House”.  We heard reports of machete wielding election officials, riots and chaos, but overall, the electorate was gathering. However, midday through Saturday, the news related that although voters had gathered, the ballots had not been delivered and distributed in time, and the election would be postponed until Monday April 4th!

Well, this announcement sent a flurry of activity and schedule rearrangements throughout the country.  Schools were canceled, airline reservations were changed and political parties were in an uproar!

Now you must understand that Nigeria politics is represented by well in excess of 15+ political parties,  ranging from the large “People’s Democratic Party” (PDP),  to small local parties.  The different change in the date brought an uproar from the smaller parties whose resources are limited and who would find it difficult to remobilize that quickly.  Sunday was characterized by a series of protest from theses smaller parties, and in deference to them, the Election Committee (INEC – Independent National Electoral Commission) moved all of the elections again – scheduling them for April 9th, April 16th and Tuesday, April 26. As you might guess, this resulted in another round of “Walhalla” – Nigerian Chaos!

Fast forward to Friday April 8th.  It is 2:00pm and the Government has announced that all vehicular traffic will be banned in preparation for tomorrows postponed elections beginning at 10pm tonight!  Now most Nigerians in Lagos commute hours to and from work on a patchwork of public transport that is neither dependable nor safe.  This decree sent locals scurrying for early transport home and brought the road system to a standstill before 5pm.  Many of us limped our way home as soon as we could to release our drivers and staff to find their way back to locales near their polling places.

Saturday dawned eerily quiet, no honking horns no vehicular traffic sounds at all, most unusual for Lagos.   NO news bulletins and no urgent SMS announcements all day, quite a contrast from the week before.  Sunday’s papers noted “The elections into the National assembly were finally held in Nigeria amidst tight security after two postponements.  The elections took place in 94 senatorial districts and 310 House of Representative constituencies.  The elections were reported as generally peaceful with isolated cases of violence. Preliminary results so far released by the Independent National Electoral Commission showed that the ruling Peoples Democratic Party may lose its overwhelming domination in the National Assembly but will still retain majority of seats.  The presidential election will take place on Saturday April 16th.” 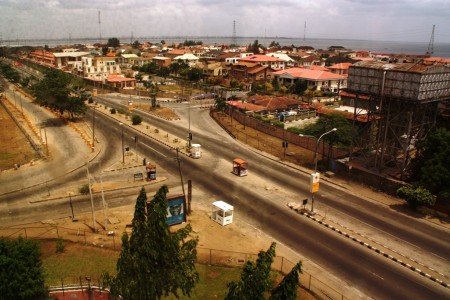 The empty streets of Ikoyi! This is what a restricted movement day looks like! 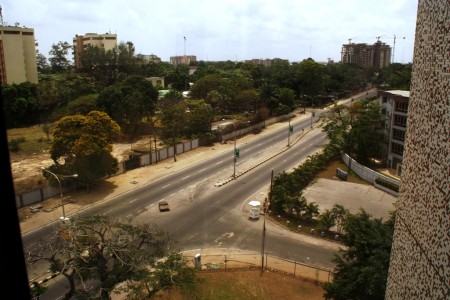