The day was a scenic mural of vast game-covered vistas, punctuated with spectacular sightings!  We entered the Talek Gate, and headed west towards the Mara River over the Olorukoti Plains.   Over two million Wildebeest and another half-million Zebra make the migration north to this area every year, and the herds there now, after most of the migration, were vast and wondrous.  While making our way to the Mara River, we needed to cross a number of tributary creeks and streams.  Since it had rained considerable in the park the night before, some of these were un-navigatable by vehicles.  On one crossing in particular, we observed a vehicle in front of us get stuck in the mud ruts, unable to navigate the flooded road ahead, unable to back-up up the hill, and unable to jump the wheels out of the ruts onto better ground.  Our driver got out to help as the others cut grass to place under the vehicle’s tires, and to push the vehicle to safety.  They finally got it out, but unfortunately, Samuel was spattered with mud for his trouble.  With him at our wheel, we made the crossing in a new spot, sliding comfortably onto dryer ground on the other side, and grabbing traction to climb up out of the valley.

We also came upon numerous groups of Giraffes, and a couple of pods of Elephants.  However, the first unexpected highlight was when we encountered a mother Cheetah with four 1-month old cubs.  Mother was obviously on the lookout for a meal, and every animal within sight had a hard lookout on her.  A hungry Cheetah mother with cubs is a danger to most animals on these plains, and they we at their most alert status.  Meanwhile, the cubs were wrestling and playing the whole time, already knowing where their next meal was coming from.  They were just losing their baby-down, and were likely still suckling from their mother.  Unfortunately, the law of the wild says that only two of the four of these cubs will be lucky to make it to adulthood.  Lions stalk and kill Cheetah cubs to maintain a competitive balance of predatory cats in the wild.  We regretfully left the Cheetahs, and continued our journey to the Mara River, near the southern border of Kenya.

Next on the adventure was a climb to the top of Loldopai Hill Lookout, 1580 meters up, where a view of the Mara River Valley stretches to the horizon in each direction.  On the way down, we came across a trio of Hyenas who were so gorged that they could barely walk.  We soon reached the Mara River, where, in the slower moving waters of the muddy river, huge families of Hippopotami soaked while bellowing their dominance over the river valley.  We saw at least 4 pods of over 15 Hippos each in one small section of the river.  Even the giant African Crocodiles, of which we saw two 16-footers, defer to these Hippos, who leave the water at dusk each day, to climb the banks and eat grass all night long.  Here, on the high banks of the river, we had a picnic lunch, sitting on ground that just one to two weeks ago saw millions of hooves pass. 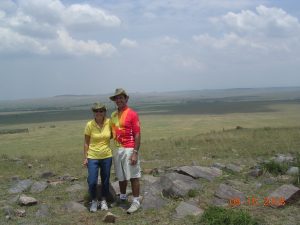 After lunch, we travelled along the river until we could see a small grotto of brush, with a few trees topping a local hill.  There, in the branches of the tallest tree was the carcass of an antelope, a telltale sign of a Leopard/Jaguar kill.  We circled the grotto until we spotted the Leopard resting in the shade of a tree, waiting out the heat of the day.  She was lithe and incredibly powerful, being able to bring down an animal equal to her weight, transport it back to the Grotto, and haul it 30 feet up a tree.  We left her resting in peace, and continued our journey.

We then started our journey back to the gate via a different route, following the tributaries to the river.  We came upon another small group of elephants blocking the road with play in the rutted road’s mud puddles.  They sprayed themselves, and playfully frolicked with the water at hand.  We slowly circled around them, and went on to cross the tributary where we spotted another Leopard near the marsh’s edge, sound asleep under a bush.  After leaving the wet lowlands, we headed back up to the plains, coming across more groups of Giraffes, and another large pod of Elephants.  This group of 16 Elephants had 2 small babies among it, and the herd was careful to always keep those two sandwiched between two large adult females for protection from predators.  Daylight was growing short and so we reluctantly resumed our journey to the Gate.  But one more surprise awaited us tonight as we came up on a huge male Ostrich.  This bird was much bigger than the Wildebeest and Zebra that we has seen, and was easily 12 to 14 feet tall.  It was a fitting end of a wonderful day in the park.