Where would we be without friends?  Strong friends when it comes to a pool table.  When the pool table was unassembled and crated in the USA, we were under the impression that there would be an assembly group here in Nigeria.  Having had repair men come to change a ceiling light bulb without a ladder and the plumber come to fix plumbing with only a screw driver, it became clear to us that we would be assembling the pool table ourselves.  The frame was intact but having been stood on end it had one broken board.

The furniture carver that has made us a new top for our bar came to the rescue and made us a replacement for the broken board. 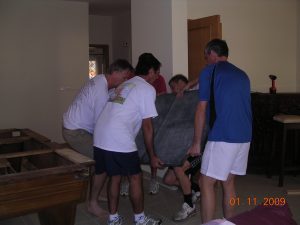 Then with the help of 5 strong neighbor men we uncrated the 3 slates, (~300 lbs each), and placed them in position.  I was no help as my leg still did not bend from my knee surgery, and I really can’t walk like one should. 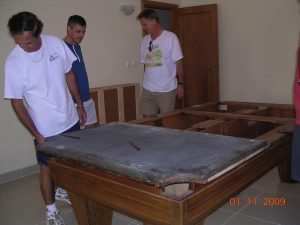 We brought a new felt with us from the USA, and we then began to level and re-surface the table in preparation of stretching the new felt over it. 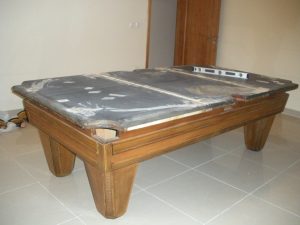 The men were all promised game-time at the table once it was complete.  It takes a small village to assemble a pool table.  Rocky spent the next week plastering and sanding the seams and imperfections in the slate, and then stretching the new felt over it and tacking the edges. 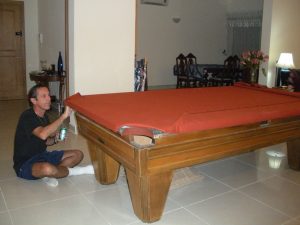 The more difficult part was cutting and stretching the felt over the pocket cutouts, especially on the sides.  Once the felt was on, holes were cut on it to match the slate holes where the rails assemble on top of it.  The rails themselves were interesting to assemble!  The entire rail assembly must be done at one time, upside-down, and then flipped over to bolt unto the table.  This is because, once assembled, the slate hides the screw holes for the pocket-rods.  Once the rails are bolted on, then the leather pocket baskets must be tacked to the table to complete the job.  The only problem was the disassembler in Houston had simply pulled the pockets off, damaging a number of the leather ends, requiring a lot of detailed, custom assembly adjustments.  By mid-January, however, the Pool Table was assembled – and it plays fantastic!!