After we returned from the new year, we were invited by a Scottish Expat couple who are friends of ours to a ball on Saturday, January 24th – something called “Burn’s Night”.  Now we had never heard of “Burn’s Night” before, and it was subsequently explained to us that the occasion was being celebrated all over the world, (locally sponsored by The Caledonia Society), in honor of Scottish history and Robert Burn’s, (his birthday is January 25th), the most famous author/poet in Scottish history, who wrote passionately of Scottish independence, and his love of women, whiskey and song.  The party was a very formal affair, with traditional Scottish kilts, formal tuxedos and ball gowns.  The ballroom was decorated in purple and red sashes with Scottish Coats-of-Arms displayed everywhere.  Approximately 300 people attended from every nationality, race and religion, and it was a very scripted affair. 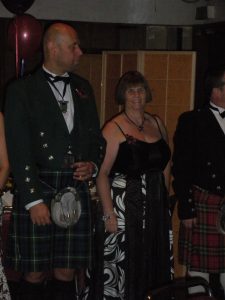 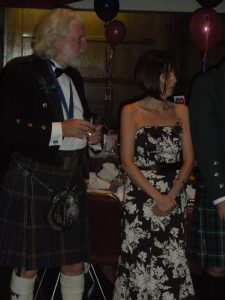 The night began with a formal Receiving Line of the Society’s Officers, from which we were steered directly to your choice of Champagne or Scotch Whiskey as the warm-up.  After ~30 minutes of arrivals and social meandering, everyone took their seats and the program began with a procession of bagpipes and officers.  We listened to welcoming addresses, and stood for the Scottish National Anthem, The Nigerian National Anthem, and a round of “God Save the Queen”, at which point we got down to business with a couple of traditional Scottish dances to which everyone was expected to participate in, (kind of a combination of square dances and line dances). 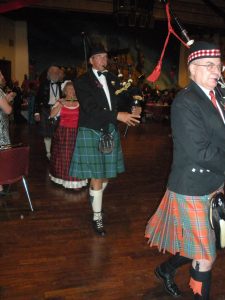 This then led to the most important procession and the occasion for the President of the Society to “Address the Haggis”!  Again, a bagpipe-led line paraded, with a matron carrying the ceremonial “haggis” on a silver tray, being honored by all.  A few rounds of Robert Burn’s poetry, honors to the ideals of the Scots, numerous rounds of toasts, and it was then time for dinner – for starters haggis, taters, and carrots; main dish of beef, chicken or veggie; a sweet puddin dessert; lots of wine & whiskey. 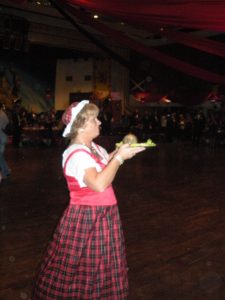 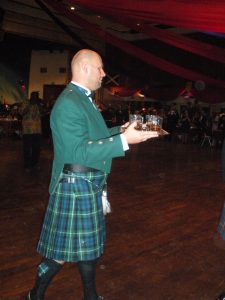 After dinner, it was time for the address of the “Laddie’s”, where a learned male scholar discusses & exposes the great virtues and strengths of the stronger sex.  This is then followed by the reply from the “Lassie’s”, who led a stirring exposé on the historic shortcomings of men, both in competence and anatomically.  Finally, the speeches being complete, it’s just the tea, coffee, and Baileys along with 12 participant Scottish dances by a traditional Scottish folk-band, flown in for the occasion from the U.K.  It being past midnight already, we decided our night was calling for an end, but we expected the party would continue long without us into the wee hours of the night. 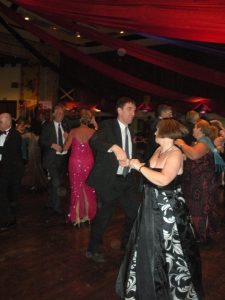 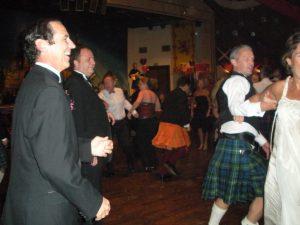 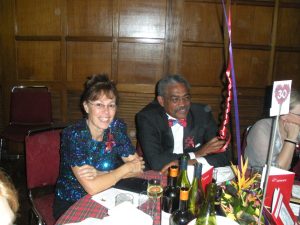