Having just returned from Patagonia and the Chilean Fjords, we quickly readied ourselves for a Saturday, February 2nd flight back to South America.  From New Orleans, we flew to Atlanta and then Sao Paulo, Brazil, where our connection left us only 80-minutes to clear international immigration, pick up luggage, clear customs re-check the luggage, and race to the gate for our 1 ½ hour domestic flight to Iguassu Falls, Brazil!  We arrive at the gate just as the staff start the boarding process.

The airport in Iguassu Falls is being totally reconstructed. Luckily, our luggage also arrived, and we are then off to find Veronica, our guide for this trip. Our total group are only 4 people which will make for an interesting and intimate excursion.  It is only a 10-minutes to our hotel, the “Bourbon”, which is lovely with huge trees shading the front drive, and a very green interior of lush vines and vegetation.  The hotel is quite large with its own convention center, 5 dining spaces, and 2 pools (one out door and one indoor (heated). There is a full spa and gym as well as a vegetable garden and orchard, 3 hiking trails, tennis, volleyball, soccer fields, a jungle zip line and rope course, an aviary, mini-zoo, and a child’s play area that includes a tree house, rock climbing wall, cinema, and game/activity center.  As it is Sunday and, although the city is almost 250,000 people, most of its shops downtown are closed, and we walk, instead, away from town, to the local shopping mall and found a small restaurant that served Brazilian shawarmas for lunch.  After returning to the hotel, we used the afternoon to hike the hotel’s trails and then took a swim in the heated pool. Later we met up with our guide Veronica to learn the next day’s plan and meet the other 2 guests (Al & Sherilyn) in our party.  We celebrated with a native Brazilian welcome drink – a Caipirinha – served with a nibble of warm nuts.  Dinner that night was a buffet in the hotel’s restaurant.

Tuesday after breakfast, our guide introduced us to our bus driver, Eduardo, who drove us to the Brazilian National Park at Fox de Iguassu – “the confluence of 2 rivers”. Here, the Pianera River meets the Iguassu River and forms the border between Argentina, Brazil and Paraguay.  The Iguassu Falls are downstream of the junction of these rivers and is still the border between Brazil and Argentina.  From here, the river continues its journey to eventually join the River Plata. Both countries have National Parks around the Falls, and the Park is surrounded by a larger buffer zone to protect the local flora and fauna.  Most of the buffer zone was originally used for farming, but increasingly is being put aside and allowed to recover naturally.  In 1986, UNESCO declared the area a World Heritage Site.  Iguassu Falls normally delivers only 1/8 the volume of Niagara Falls, but in size is the second largest to Victoria Falls in Africa.  There are actually over 275 individually named waterfalls here with the Brazilian side encompassing ~100,000+ hectares, and the Argentinean side another 60,000 hectares. The Falls are over 2-miles wide and were first described by a Spanish explorer, Alvar Nunez, in 1542.  He originally named them the “Holy Mary” waterfalls. The Brazilian side was named a park in 1939.

The parks are populated with many native species, including toucans, jaguars and quati – a racoon-like animal that roams all over the park looking to scavenge or even steal an unsuspecting person’s lunch. In 2001 there were 41 jaguars in the park, but their numbers have grown and 95 now call the park their home.  Other species are also doing well in the park, including a number of local palm trees that used to be killed and harvested for their palm heart.  Today, this food crop has been replaced by a more tolerant species of palm grown in the north of Brazil.  Also, the acai plant grows wild here, and is useful as an antioxidant, for skin care, and in the treatment of adult diabetes. 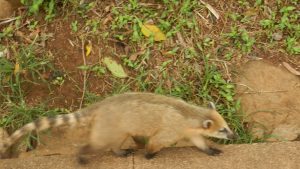 After we arrive, we begin a walk to the river’s side when we come upon our first large and colorful Toucan. Our first view is of “the Three Musketeers”, a lower tier of three falls where our boat excursion the next day will take us.  Next, we come upon a viewpoint of “the Devil’s Throat”, a 2,300-foot long spectacular narrow canyon where the torrents crash in from 3 sides and the spray is like a hurricane rainstorm.  The Brazilians have built a walkway out over a ledge facing these falls and the view is breathtaking and wet.  We then take the glass elevator up to the main park road where we visit a small food court for lunch.  Here we ordered salami baguette and fries with a beer and a caipirinha, all while protecting our lunch from thieving quatis.

After lunch, we take a little tram jungle tour through the park’s secondary rain-forest, as the park does not allow any tourism in the primary rain-forest.  Here there is a strong conservation effort trying to preserve the rain-forest as there are less than 20 trees left here that are over a hundred years old. Historically, trees in this rain-forest had been cut for their wood, and these species grow very slowly. After our tour, we transfer to an old Jeep and head down closer to the river’s cliff-face where we board a funicular that takes us down to the river’s edge.  Here we put on life-jackets and then board a special zodiac with twin mercury engines. We cruised down the river to “the Three Musketeers” water-falls and run the boat first next to and then under the first of the falls.  This is then followed by a wild ride through some of the rapids and a series of “donuts” on the water for a thrilling river ride.  After drying-off, we return back to our bus via Jeep and tram.

Dinner that night was on our own, so we again walked to the local shopping mall and had a Churrasco meal-for-two with chicken, pork and steak including fries, rice and salad and ice cream for dessert. It was much more food than we had expected, and we were glad that we could walk some of it off as we headed back to the hotel.

Wednesday morning, we were up early for a buffet breakfast prior to readying ourselves to cross into Argentina to see the Falls from the other side.  In order to execute this, we drive to Brazil’s Border Crossing, exit the bus and present ourselves to Brazil Immigration, then re-board the bus and drive a short distance to the Argentina Border Crossing and do the same. When crossing the bridge over the river border, the bridge changes colors from yellow & green to blue & white.  Along the river are people fishing for surlie, dorado, and pachoo, some weighing-in at over 100 pounds.

The Argentinian side of the falls was named a park in 1934 and declared a UNESCO World Heritage Site in 1984.  By regulation, each side of the park has only a single resort/hotel, and it must meet “green” requirements to remain open within the Parks’ boundaries. When we arrive, it is 8:30am and the there is a huge line of vehicles waiting to enter the park.  We enter nearly first and after walking through the gates, we board a small-gauge train to transport us through the pristine rainforest to the site of the Falls located at the 3rd stop.  From here, we hike ~1100 meters to the other side of “the Devils Throat” along a well-built “moonwalk trail”.  From this side we are at the top of the Falls looking down into “the Devil’s Throat” and again immersed in a rainstorm of spray.  After finishing this “loop”, we take the train back to the first train station and walk the Superior/Upper trail (~1750 meters long loop) to see Falls up close where yesterday we viewed them from across the gorge.  A number of places were looking over the edges of the Falls, and the mist provided for a damp picture-taking day.  Upon completing the Upper Loop, it was time for lunch at a small food court, where we had empanadas and cervasas.

After lunch we headed to the Lower Trail (`~2300 meters long loop) that takes us past the Argentinean Viejo Hotel.  This hotel was first built and opened in 1919 but was closed in 1978 because it was too small to receive World Cup visitors.  It was then that the new hotel/resort opened.  In 2017 they reopened the old Viejo Hotel as a Park Office and as a place to give Park Researchers additional space from which to work.  As we walked, we saw four Chestnut Arasari Toucans (not as colorful as the yellow billed toucan) and then we saw Plush Crested Jays.  We continued own walk down the Lower Circuit of the Falls where we had great views of San Martin Island and Falls named: Salto Bossetti, Salto Eva, Salto Adan, Alvar Nunez, Salto Chico, and Salto Mbigua.

After a long day of walking, we returned to the hotel, again passing immigration in Argentina and then re-entering Brazil (for which our visa was required) and then onto our hotel.  That night, we had a group dinner at the hotel for our last night in Brazil.

The next morning, Wednesday, February 6th, we meet in the lobby at 9:30am for our bus departure again to the Argentinian border.  We are flying from Iguassu Falls on the Argentinean-side of the border to take a domestic flight to Buenos Aires.  We clear Brazil customs and Argentina immigration smoothly, just like the previous day.  However, when passing through the border, we notice a huge traffic line of vehicles trying to cross into Brazil stretching miles long.  Further down the highway we begin to see cars and buses parked on the side of the road and several are turning around.  When we pass the Argentinean National Park Entrance that we visited the day before, it is closed and protected by numerous Park Officials sitting in their cars and with Police in riot gear lining the road. All around the Park’s entrance there are protesters who are objecting to a plan for a new “Native Village” to be developed in the park.  This native village would cause locals with businesses outside of the park to lose business and income, since it would centralize tourism even more within the park and keep the profits internally.  It might also potentially jeopardize their UNESCO World Heritage Site status.  Since the park knew of the planned protest, it was closed to visitors, which is why the buses and cars were parked on the surrounding roadsides, and why some are trying to visit the Brazilian park instead.  Many tourist buses are parked, hoping the protest would soon end and the park would reopen. Luckily, we are able to make our way through and arrive at the local airport, which is very small (only 2 gates).  From here we board our flight and head to Buenos Aires for the next adventure.