On our brief but first visit to South Africa, we were impressed with the passion of its residents.  Everywhere, there was a huge pride that bound the country together in their commitment to bring the World to their shores for Africa’s first World Cup in 2010.  It was especially impressive to see a country where apartheid ruled only 20 years ago, lift itself to new levels of cooperation, trust and respect.  The spectacular Green’s Point Soccer Stadium rises on the shores of Cape Town as a local symbol of this commitment to demonstrate to the world that their country is ready to take a respected seat among the leaders of the world.

Although Progress has been made, the country preserves its painful history, so elegantly reminded through the World Heritage Site at Robben Island.  Robben Island is a low limestone island in the bay off Cape Town that was originally named for the seals that inhabited the island, and is a half-hour’s boat ride from Cape Town waterfront.  In the 1800’s and early 1900’s, it was used to isolate international lepers in a colony and later as a criminal prison, and political holding area for enemies of the state.  Today, the only marked graves remaining on the island are a small plot from groups of these diseased souls who not only lived out their lives in the small space, but married and had children who were taken from then since they did not have the disease. 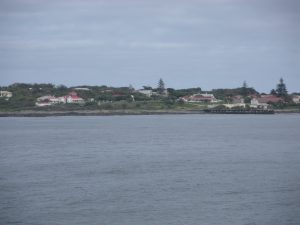 Robben Island from the ferry

Also remaining on the island are the prisons and supporting structures for what grew to be a political prisoner holding area during the latter 20th century.  Housed on the island was the State internment area for Robert Sobukwe.  Mr. Sobukwe was a black leader during the apartheid years who was arrested and had served his full prison term sentence.  However, instead of being released, the government wrote a specific constitutional phase in that allowed them to hold him here in an isolated room-building among only dog kennels for the rest of his life to prevent him from influencing others in the country or any of those also imprisoned on the island.  For years, he was never allowed to talk with another person. 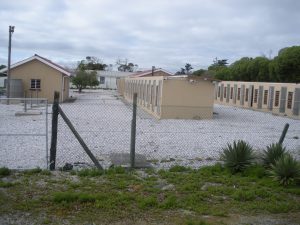 During the growing anti-apartheid movement of the 1970’s and 1980’s, many political activists were jailed here, although the cell blocks were limited to only male persons of color only. 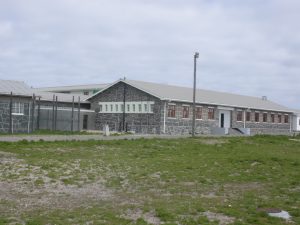 Most famous of these was Nelson Mandella, who was interned here for 17 years in the highest security area – Cell Block “B”.  He later was held on the mainland for another 7 years for refusing to renounce violence as a means for ending apartheid, until his release and pardon in the 1990’s.  Our tour through the prison was especially poignant given that it was led and described by Mr. Itumeleng Makwela, himself a prisoner in cell blocks “A” and “F” for 10 years, and one of the prison’s cooks.

In 1980 he was arrested for distributing weapons to the dissidents and served his sentence while Mr. Mandella was there.  He talked of sleeping on a floor mat in the early days before beds were finally allowed. 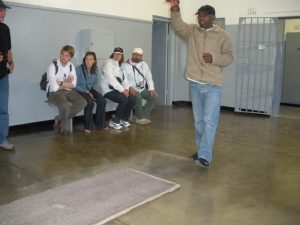 And he talked of long evenings as the inmates would hide near the only light in the bathrooms, teaching and educated each other to read and write, and to learn of the value and of the price of freedom for which they struggled.  Their days were spend at the island’s limestone quarry, where they broke rocks by hand, initially to provide road material for the country,

but later to simply provide a hard toil for them  At the time Makwela was released in 1990, was being paid 5 rand per month for being a cook.  He is one of the dwindling survivors of this place who still have a personal story to tell, and we felt honored to have had the chance to listen to him.  No one ever escaped from Robbin Island, and it was closed in the early 1990’s, and eventually turned into a memorial and Heritage Site.  Today, approximately 127 people still live on the island, many of them families of both the guards and the inmates who spent much of their life in this place.

Back on shore, one marvels at how far the country and its people have come in such a short time.  South Africans of all races freely demonstrate their native cultures and peacefully discuss their differences and their joint aspirations.  We met a number of visitors from Australia, England and New Zealand who were former residents of South Africa, and who left the country during its violent period 20-plus years ago.  They were coming back to revisit and reassess their country, as will the world next year.  The wounds of the past are healing, and the country is an exciting place to visit as the voice of recent freedom still echoes clearly in the air here. 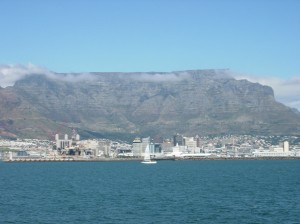 Capetown and Table Mountain from the bay