We had often heard from our traveling friends that Cape Town, South Africa was on of the most beautiful places that they had been, but we have traveled to many beautiful places from the coast of Brazil, to the plains of East Africa, from the valleys of Yellowstone to the shore of the Caribbean, from the roof of Hawaii to the islands of the Eastern Mediterranean, so we were a bit skeptical.  However, after our first visit there, we are convinced that the juxtaposition of the area’s natural beauty with quality lifestyle and entertainment is clearly world-class! 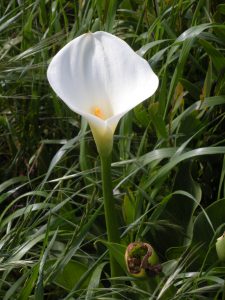 When one talks of the natural beauty of Cape Town, it falls into two regions – the meandering coastline with its beautiful beaches, quaint villages and historic points; and the soaring mountains which rise from the sea and provide a crown of weather, views and adventure for those who reside below them.  We started our journey along the western coast of the peninsula which forms the east side of False Bay.  This area is ringed with quaint, sleepy villages, (Fish Hoek, Glen Cairn & Simonstown), home to sailing, art and antiques.

As one travels south to Cape Point, there are an abundance of isolated coves, offshore rocks and scenic overlook restaurants where one can sample local seafood.  The coastal road eventually gives way to an ascent to the Cape of Good Hope Nature Reserve, and eventually Cape Point.  This is the southern-most point in Africa, where the Atlantic and Indian Oceans meet, and an area of numerous sailor’s tales and lost ships. 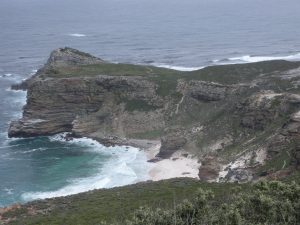 A hike to the lighthouse provides a spectacular view of the area and a chronology of ships that continue to be lost in this area, as they choose to hug the African coastline to avoid waves and weather, but risk the submerged rocks lurking below. 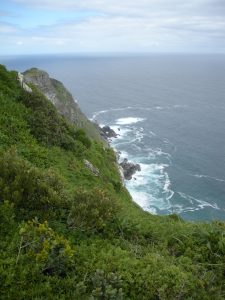 We turn our travel north on the western-side of the peninsula, finding many of the beaches where surfers build their skills.  On this coast, the sleepy villages are replaced with the tuna boats and shrimp trawlers of fishing towns, such as Hout Bay, and finally we arrive at the city outskirts at the picturesque Camps Bay.  Passing this point and coming into view of Cape Town, the shadow of Table Mountain towering over the city dominates every landscape view. 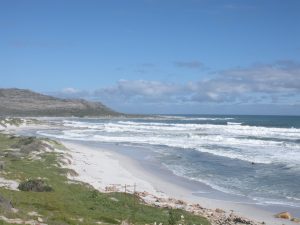 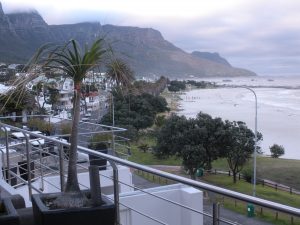 Camps Bay from our room at Primi Sea Castle

Table Mountain is a spectacularly “flat” mountain at ~1050 meters high, which rises nearly straight up from the coast.  To go up to the top, we took the Cable Car to the summit of the Western Table, from which numerous hiking trails emanate.  A 2 ½ hour hike took us across Platteklip’s Gorge to the Eastern Table and the mountain’s highest point, MacLears Beacon, at 1088 meters.  We were lucky with the clarity of the day, as the mountain creates it’s own weather, and can often by restricted by dense fog and high winds.  The trail is a combination of rock steppers, alpine meadow boardwalks, and cliff-edge trails with spectacular views of the coast and city below. From our residence at Camps Bay, we could daily see clouds roll in from over the mountain, drop down over us, and promptly lower our coastal temperature 10 degrees Centigrade. To the north of Table Mountain are Lions Head Mountain, and Signal Hill, both popular and challenging outdoor adventures to hike up.  One can drive up to the top of Signal Hill where there are unparalleled views of Table Mountain and the local Coast.  Every day at noon, they still fire a single cannon from the mount, a signal and tribute to the city’s colorful past.  At the northern base of these mountains is Cape Bay, with its bustling and renovated Victoria & Albert Waterfront shopping, Green’s Point Soccer Stadium and gateway to the Atlantic Seaboard. 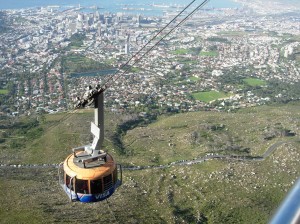 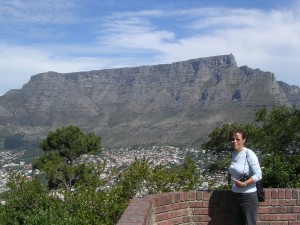 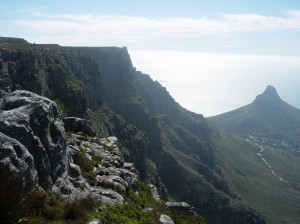 Table Mountain – West Table as viewed from the East Table 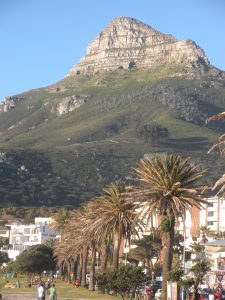 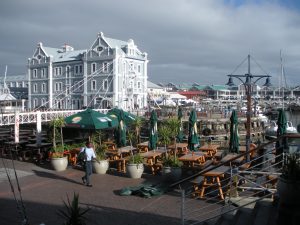