It was Thursday and the weekend was rapidly approaching.  With rainy season upon us and a free Saturday coming up we decided to join up with a Nigerian Field Society, (NFS), for a local excursion to the Nigerian Railway Corporation, (NRC).

The trip was jointly sponsored by NFS and a group called “Legacy” which focuses on maintaining historical infrastructure.  We followed directions to the Ebutte-Metta Junction Station in Lagos where we met ~ 70 other people to take a train trip “Down the Line” to Ikojo, a town located 40 kilometers away.  The trip was scheduled to depart at 9am, but, as is common in Nigeria, we didn’t have a diesel locomotive until ~9:45am and thus left late.

This route services over 7,000 commuters each week as 3 trains of 9 coaches each travel it 5 days a week.  For our excursion, on Saturday, the NRC brought out its special coaches, including a Barcar, an air-conditioned 60 passenger sitting car, a 25 passenger recreational car and NRC’s lone dignitary salon car, complete with black leather sofas, lush red velvet drapes and climate control system.  In order to power this extravagance, a diesel generator car was also attached.

With everybody on board, we began the hour-long journey out of Lagos.  One is immediately surprised at how Nigerian life has moved right up to, and in some cases over the train’s tracks.  We traveled through busy markets, squatters villages and along a corridor showing a cross section of typical life in Nigeria –   many poor people marginally making a living on the edge of disease and ruin.  But most Nigerians are hard workers and they move on, building a life for themselves and their families the best that they can.  Venders who are set up on the tracks move to the side as the train passes.  Market stalls and umbrellas are only inches from the train as it passes by at ~40-50 km/hour.  Walls that were built to protect residents from the train’s route have simply fallen down and serve as hills on which children play and business takes place.

We arrive in Ikojo at ~11am and are greeted by a town delegation of immaculately dressed men and women in Nigerian Finery and are serenaded by a loud local drum corps.  The train stops, we disembark and are escorted through town to greet the Oba, the town’s equivalent of a Mayor, Chief of Police and Judge all rolled into one person.  After pleasantries are exchanged, gifts are given, and many handshakes and photographs are taken, we walked back to the train for the trip back. 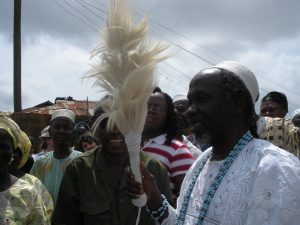 On the train we talk to one of the Conductors, Augustine, and to the NRC’s Chief Engineer, Abdul Sanni.  Abdul explains that the weekly commuter trains are blue and that the coaches in which we are traveling are green, and that everyone on the ground knows that the green train is special.  This is why so many of the locals are taking notice of us as we pass through their communities.  We are also told that this train line goes all the way to Kano in the North of Nigeria, a 2-3 day journey.  However, service is currently suspended because the number of reliable locomotives that NRC has available today does not allow for it.  Like much of the infrastructure in Nigeria, maintenance has been ignored and the consequences are now undependable service.

We arrive back at Ebutte-Metta Junction at 1:00pm, as promised, and complete the morning’s journey/adventure.  Today was just a small glimpse of the country from inside of an iron horse left here by the British before independence was given.