The Maasai Mara Park shares its southern border with Tanzania and their Serengeti Park.  The area is home to the Maasai people, who still build traditional homesteads of encircled huts and wear traditional red linen wraps.  They are still a people who herd their animals, (cattle, sheep or goats), and stay with them 24 hours a day, moving to wherever the herd’s food drives them.  The auto ride south is a formidable one – five hours by road, only half of which is on an improved road.  We are impressed by the amount of agriculture that takes place in this country, with multitudes of family-sized farms growing nearly every type of vegetable that one can think of.  At a little after noon, we finally enter the Maasai Mara Park through the Sekenani Gate, and immediately spot a large family of Elephants, followed by a group of Giraffes.  We crest a hill, and are met with the annual Wildebeest migration – 100’s of thousands of animals moving across the park in an annual migration that takes them north across the Mara River. 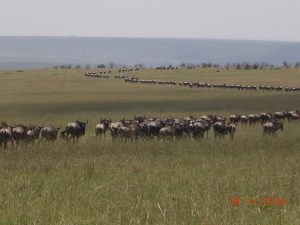 It is a sight that is hard to fathom, as they move along the same routes as have been used as long as man has recorded the event.  Mixed in along the way are large Secretary Birds prancing about, large herds of Zebra, groups of Gazelles and numerous pods of Topi, a very large type of antelope.  We head to the Nymebu Tented Camp, located just outside the park’s Talek Gate, and arrive just in time to have a catered lunch.

Our tented camp is a collection of 16 permanent residence tents on stonemasoned slabs.  The camp is powered by large solar cells, and sits within the wildlife area.  We no sooner finish lunch, and three Zebra wander through camp, and from our front porch seats, we spot a group of Wildebeest and a family of six elephants.  The camp has a large and helpful staff, and its food is spectacular.  www.maasaimara-nyumbu.com 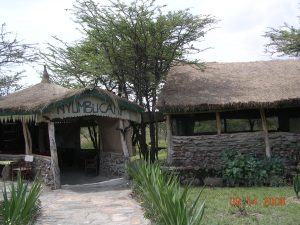 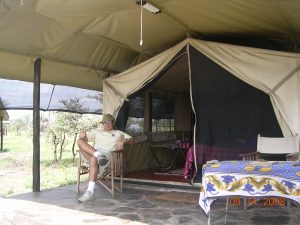 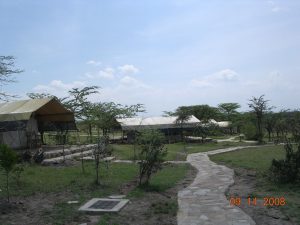 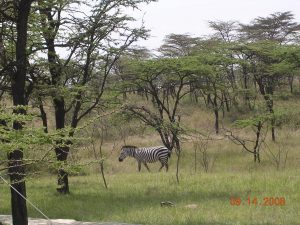 At 4:00pm, we leave for a dusk game drive through the park.  We are accompanied by a Maasai Guide, Edward, who guides us through the park to the Talek River, passing more Wildebeest, Zebras, Gazelles, Antelope, and Giraffe until we happen upon a pack of Hyena who have obviously just eaten, with distended stomachs, and lack of vigour.  We spot a majestic Martial Eagle, and a snake-eating Secretary Bird, a 3-foot tall stork-looking creature with tufted crests upon his head.

Our first major highlight of the evening, however, was as at the top of the river’s embankment, where we came across a pride of six Lions, napping and resting in the grass.  From our open, exposed vehicle, not 5 meters away, we watched the 3 adult females, and the other 3 young adult Lions for nearly one-half hour, at which point we started to draw a crowd, and so we moved on.  However, just 10 minutes ahead, we came across another female adult lion, up and searching for her next meal. 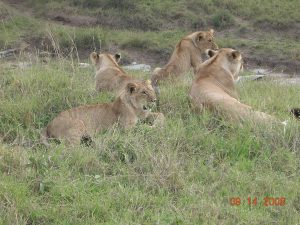 Our second highlight came soon afterwards, as on a mound, 60 meters away, sitting tall was a king of land speed, an adult Cheetah.  He sat attentively, watching a Servel Cat who was entering his territory.  When the Cat approached too close, the Cheetah let out with a tremendous burst of speed, sending the Cat scurrying for its life.  With the problem resolved, the Cheetah returned to his throne and took up his surveying of the plains below.

By now, the sun was setting, and we started the journey back to the Camp.  In the distance, translucent veils of showers played with the setting sun to cast an orange brilliance on the horizon. 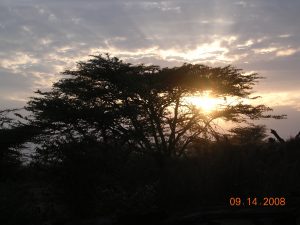 We arrived back at camp at 7:00pm, and after shooing the Zebra grazing away from our tent door, we washed, changed, and headed to dinner.

On this night, we are sharing the Camp with only 7 other guests, also from the United States, but having travelled from a previous Safari in Tanzania.  We share a pre-dinner campfire with all, listening to Maasai childhood animal stories told by James, our Maasai host and expert Camp Guide.  Dinner is served at 8:00pm in the Dining Tent, and is enjoyed by all, as a brief thunderstorm rolls past.  9:00pm calls for bedtime as we have a long day of game rides tomorrow.

With Zebras and Wildebeest around the tent all night, it was not unusual to wake to snorts and grunts, and the sound of hooves on the ground around us.  We rose with the sun, showered and made our way to breakfast, looking out over the river bottom at the foot of the camp, and the antelope covered plains beyond.  We left for a day of Game Drive in Maasai Mara Park with our driver, Samuel, at 8:0am, and we were not disappointed.