We turned south and arrived in the town of Naivasha just in time for lunch, and check into the Lake Naivasha Simba Lodge,

70 villas spread around on the edge of a Game Preserve on the lake’s shores.  While eating lunch, we saw giraffes ducking in and out of the trees across the field, and after lunch we went for a quiet walk through the forest to the lakefront observation tower and jetty.  Along the way, we skirted groups of waterbucks, bushbucks and other gazelles, and walked up on a huge Maribou stork, (over 4 feet tall and likely 70 pounds). 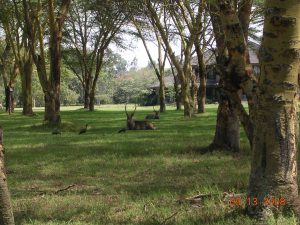 Wandering unattended among the wildlife made us feel as if these moments were taken from the pages of National Geographic.  It’s an adventurous, but powerless, feeling walking among 200-800 pound animals knowing that you are in their home and that your safety is at their discretion.  Ahead, we ascended the observation tower, from which we could see the rangers working to remove a dead Hippo from the lake – a loser in a 24-hour battle with another Hippo over the attention of a female.

At 4:00pm, we met Samuel for a Game Drive in Hell’s Gate – a park that encompasses the part of the East African Rift System that includes active geothermal springs and vents.  Upon entering the Park, we saw herds of Plains Zebra, Thompson Gazelles, Impalas, and Grant’s Gazelles.  A particularly curious baboon watched us from a few feet away, as we drove deeper into the Park.

In the middle of the Park, we stopped at the headwaters of the Rift Ravine, fed year round with 100 degree Fahrenheit water.  A local tribal guide took us on an hours hike down the ravine, walking and climbing along the riverbed hundreds of feet below the ravine rim.

After a strenuous hour of descending our way downstream, we climbed nearly straight up out of the side of the ravine on ancient footholds used by Maasai for centuries, and walked back along the ridge to our vehicle.  The journey out of the park was at dusk, but we saw a reclusive Dik-Dik, (small antelope-type of animal), and a few Elands, (large Elk-like animals), in addition to the grazing herds that we saw when we entered, and the ever-present families of warthogs.  We made it back to the Lodge in time for 8:00pm dinner.  But then, it was time for a quiet night to prepare for tomorrow’ trip.

The next morning, we arose before sunrise, and setoff back toward the lake to see if we could spot any dawn wildlife.  During the night, Water Buck herds had moved into the area, and we quietly made our way to the water’s edge where we could see a school of Hippos submerged offshore.  We were soon joined by a hotel Nature Guide, Bernard, who walked us back into the bush where we followed the sounds of clattering horns to come across two male Waterbucks fighting with their head’s down, uninterested in us.  We followed them deeper into the forest, until we remarkably came across a lone Hippo, foraging on the forest floor. We approached quietly behind a large Yellow-fever Acacia tree to within 15 meters, and then slowly circled, until the Hippo took notice, and rudely turned away.  We did not pursue, as Hippos can be very dangerous on land as well as in the water.

But the sidetrack to view the Hippo had taken us deeper into the forest where we happened upon a family of Giraffes, (including one six-month old).  We followed them for a while, but needed to complete our morning adventure in time to take a quick breakfast, check out, and begin our automobile trek to the famous Maasai Mara Park.