We arose to the mist rising from the rainforest in the morning sun as we had a lovely breakfast overlooking the valley.  We collected our day’s box lunches and traveled through the small local village of Bwindi to the entrance to the park, “The Bwindi Impenetrable Forest”, (which was only 500 meters away.)  Here, we met our fellow adventurers, 15 of us in all, as we watched a brief video introducing the local gorilla families to us.

There are 8-12 families that range near the parks entrance within a 3-4 hour hike, and the park limits the number of visitors to a maximum of 16 people per day, divided into two groups, each group to see one gorilla family for 1 hour only.  They try to rotate which gorilla families to visit each day, but whether or not one actually gets to see the gorillas depends on where they move to and which families are accepting and accessible.  Our group included us four, a retired widower from San Francisco, and two young adult women from Toronto on a 3-month Africa backpacking adventure.  We met our guide, Styven, who briefed us on the dos and don’ts of visiting gorillas in the wild.  Although the family that we would visit, “The Rushegura Family”, was known for being accepting of visitors, there were people in the past that were charged and/or attacked, and we would have armed guard rangers with us for our protection.  Meanwhile 4 Trackers had traveled out earlier in the day to the GPS marked site the gorilla family had been at the day before, as they would track the gorillas to today’s location and radio our route through the jungle ahead to our guide.  We were told that our gorilla family had only been about 1 hour away the day before, and so we had high hopes of a successful encounter.

We began our hike down a mountain trail into the ravine and across a small river, then up the jungle mountain on the other side.  However, after only 20 minutes of hiking, our guide received a radio call telling him that the trackers had followed the gorilla’s trail back towards the village closer to our starting location, and in fact, we were almost upon them.  We cut our way through the over-brush to a small semi-open canopied area where we encountered the Rushegura gorilla family, lead by the 800 pound Silverback “Murima”, who was napping on the ground.  Meanwhile the other family members were scattered about the immediate vicinity, both in the trees above, and about the area.  We took up positions about 30 feet upslope of the Silverback and quietly watched and took pictures as our one hour observation limit began.  We observed a mature female on the ground with a new born infant, (born only 3 months earlier on August 9th) and another female on a tree limb breastfeeding a young toddler.  Also roaming about was a large male, a blackback, 11-14 years old, who was not old enough to turn silver yet, and apparently was satisfied with being second-in-command.  Various other males and females were in the trees and came cautiously by to observe us. 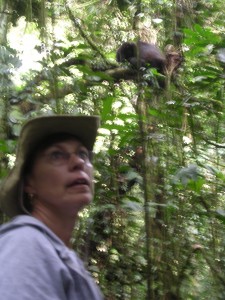 After we arrived, the toddler decided to quench his curiosity by coming to inspect us.  He climbed out of his mothers lap, down the tree, and naughtily came up to us.  The biggest threats to the gorillas are human diseases.  No person who is sick is allowed to visit the park, and no one is allowed physical contact with the gorillas.  However, the toddler came up and pulled on Rocky’s pant leg and touched Julie’s boots before being “shushed away” by the guide.  The Silverback sat up and kept an eye on us and his family as he casually ate leaves and stems.  All was quiet as the family went about its daily business for about 20 minutes until we heard the “bark” of a far-off baboon.  At this occurrence, the Silverback took notice, suddenly got up, took a few steps, called and beat on his chest, to bring his family together!  It was the classic myth scene acted out for our enjoyment!  Immediately, leaves and debris started falling from the trees above us, as other members of the gorilla family gathered.  After this, the Silverback kept on alert status, and many of the family accompanied him closely on the ground.  They were alert but not interrupted in their feeding and grooming routine.  Over the next 20 minutes, the baboons’ barks slowly circled clockwise upslope of us, until the Silverback shouted out a number of times to warn them away, and then he collected his family and moved ~100 meters away into a more open area.  We cut our way through the foliage for one last look before our hour was up and then we hiked back.  Upon returning to park headquarters, we received our certificate of authenticity for having visited the Mountain Gorillas, and were free to walk back through the village for a little local shopping and to return to our resort lodge for lunch. 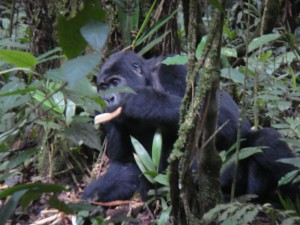 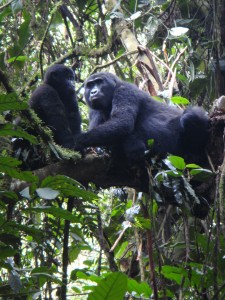 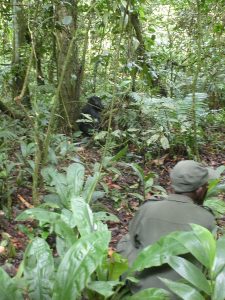 Once we finished lunch and realized we had the afternoon free, we walked back to the park and arranged a hike up the other side of the ravine to an advertised set of waterfalls.  The hike would be about 2 hours each way, and we took a guide and 2 armed rangers (in the park armed escorts are required).  The first half hour of our hike was in a typical rain forest shower, but it did not dampen our spirits.  The waterfalls were 3 in number, about 10 minutes apart from each other with each more beautiful than the last. Along the way we saw forest antelope, Columbus monkeys and the largest palm trees that we have ever seen, (Russian Palms), with fronds 50 feet long and 15 feet wide!  The trail was muddy, slippery and steamy hot, but worth the investment.  We got back to the resort camp about 5:30pm, and had time for hot showers and a few drinks at the bar, before a hot dinner featuring beef stroganoff.  We made a final toast to the day and then trundled off to bed for an early rise the next morning.

On Sunday, we arose to breakfast, met our driver, and set off back through Queen Elizabeth National Park, and back to Kampala through a more northern route through Port Royale.  This time we were held up by morning elephant herds crossing the road that were not happy to be rushed along upon hearing our horn.  We acquiesced to their casualness, and resumed our journey when they finally allowed.  The road back was not under construction and our progress was faster than planned.  Along the way, families and villages in best dress were heading to and from Sunday church.  We returned to the Shangri-La Hotel in Kampala, where our journey began, in the mid-afternoon, and had time for a quiet book in the garden, followed by dinner overlooking the city and a ponded tea garden on  a lovely Chinese restaurant balcony.

The next morning, we returned to the airport in Entebbe, flew to Nairobi and back to Lagos, our whirlwind adventure complete. 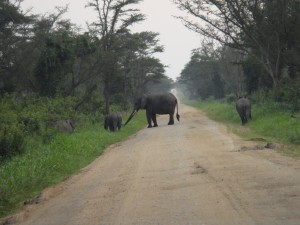