One of the truths of embarking on any quest in Africa is that uncertainty and adventure are always a viable outcome – even when unsought!  Travel in Africa brings one face-to-face with the realization that the social fabric that keeps many nations on this continent operating on a day-to-day basis, is held together by very thin threads, and that entire nations are operating balanced on a razor’s edge above chaos and anarchy.  Thus one should not be surprised when a country that was racked by war and military coup only a few year’s ago, can now emerge as a stable place for a Western tourist to visit.  Likewise, one misplaced step by the leaders of many of these countries, and they would fall off their precarious perches and quickly fall back into chaos.

It is with this backdrop that we decided to embark on a quest to see the remaining endangered Mountain Gorillas in their natural habitat.  Today, there are only ~700 gorillas left in the world, located in two areas in the far southwest corner of Uganda.  The one area is completely encompassed in Uganda in an area named the Bwindi Impenetrable Forest, and is home to about 350 gorillas in about 32 different family groups that roam the mountains and ravines of the local rainforest.  The other group is located on the Uganda border at the intersection with Rwanda and Democratic Republic of Congo.  This group lives on the rainforest that covers an ancient volcano’s slopes, and they move freely between the countries.  We chose to visit Bwindi.  The Mountain Gorilla population was decimated last century by trophy hunting, family killing to secure juveniles as pets, and habitat conflicts.  Today, the local residents dedicatedly guard this resource and the Gorilla population is slowly beginning to increase. 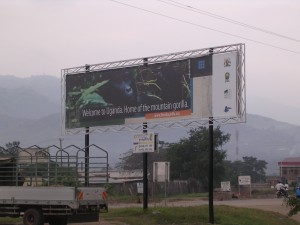 Originally, we, (Julie and Rocky), planned the trip for ourselves, extending invitations to any other adventurous souls that we knew.  The trip would be a “whirlwind” excursion, taking advantage of a 4-day weekend as a result of the Id-el-Kabir holiday.  At the last minute, our Shell neighbors, Guy and Sue Kent, decided to join us.  Our choices to get to Bwindi began with flying from Lagos, Nigeria to Nairobi, Kenya, and on to Entebbe, Uganda.  From there, we either had to fly a 12-seat “bush” airplane for 3 hours to a grass runway on the edge of the rainforest, or embark on a longer, (10-hour), but safer, route via safari vehicle.  We chose to travel overland as this also gave us the opportunity to see the local people and landscape, traverse a number of Uganda’s parks and wildlife preserves, and cross the equator more than once.  We began our trip by traveling to Lagos International Airport on Thursday morning, November 26th – Happy Thanksgiving!  After a proper English breakfast of beans, eggs, toast, and sausages we began our flights.

We arrived at Entebbe Airport in the evening and were immediately impressed with the clean and modern airport there.  We efficiently received our Visas and exited to meet our guide and driver for the long weekend, Silver.  Silver lives with his wife and children outside of Kampala, and has been taking visitors on these trips for 11 years.  We proceeded on the 1-hour drive north to the city of Kampala, where we checked in to the Shangri La Hotel, tired from our day’s journey, and recognizing that tomorrow would be a long day.  We awoke on Friday morning, took breakfast in the Hotel Garden, reviewed our agenda with Silver, and set off for Bwindi via the southern route, through the towns of Masaka and Mbarara. 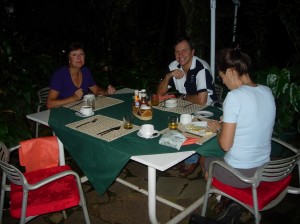 Uganda was not quite what we expected!  The roads, for the most part, were in very good shape (where they were paved), unless they were under construction.  The country’s infrastructure, including access to water and a working electrical grid, are in good shape.  People were clearly well fed, and we saw very few destitute or homeless people or beggars.  The countryside was lush and green with an abundance of bananas, pineapples, mangos, papayas, watermelons and jackfruit growing in small orchards and in large farms everywhere we looked.  The southern route through Masaka skirts along the shores of Lake Victoria, and so some of the area is swamp, where vast areas are growing with papyrus and reeds. 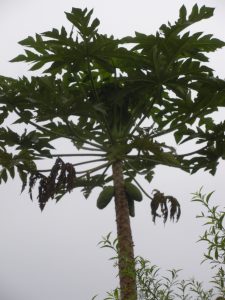 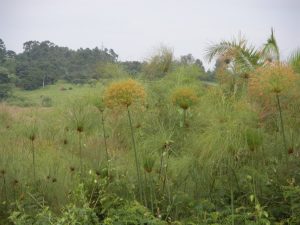 Being in Nigeria, we are familiar with the Okada, or the motorbike taxi.  In Nigeria, they dominate the roads, weaving in and out of traffic, blowing their horns continuously, and stacking as many people astride the bike as possible.  However, in Uganda, the motorbike taxi has a different incarnation.  It and the bicycle are the dominant forms of transportation for locals, and the motorbikes here are law-abiding and courteous, and their passenger sits on the back of the seat in a very proper British sidesaddle!

As we crossed the Equator into the southern hemisphere, we recognized the familiar “disguised” charcoal stands on the side of the road.  Currently, Ugandan’s are permitted to fell trees and make charcoal, but only if they “plant a tree to cut a tree”.  Of course, there is no enforcement, and this is one of the reasons that the rainforest habitat is under environmental pressure. 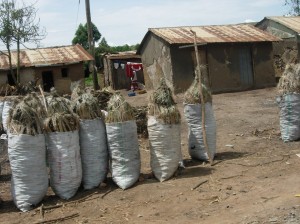 The people of Uganda are a mix of Islamic and Catholic, but apparently with respect for each other’s beliefs and customs.  We observed a very large cattle industry in the country, with herds numbering from a few head to thousands.  The preference in this area is for Longhorn cattle, (very long horns!), and they are valuable enough that all herds are tended by herders that stay with them full time. 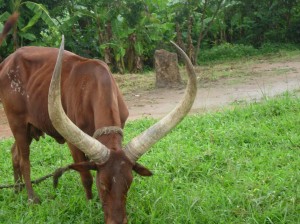 Along the way, we saw zebra, antelope and a huge number of Marin storks, (5-6 ft tall!).  At lunch, and at every stop, we took occasion to sample the local beers, including our favorite, the “Nile Special”.  Although we were not novelties, we clearly were the only Muzugus, (white skin people), around.  As we moved away from Lake Victoria into the Great Rift Basin and nearer the headwaters of the Nile, the landscape became more agricultural with huge plantations of bananas and miles of tea crops as far as the eye could see, all harvested by hand – of course – three leaves at a time.  Tea is Uganda’s number one export. 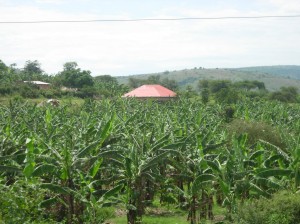 We spent the afternoon entering the hills and mountains of western Uganda, home to Lake Edwards and the great Queen Elizabeth National Park, where we encountered elephants, Kobe, impalas, waterbucks, baboons, and velvet monkeys. 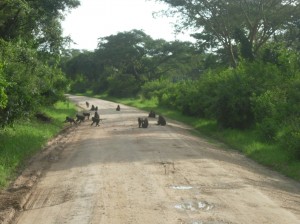 We had hoped to spot lions basking in the local trees, which is unique to this area of Africa, but were not so lucky.  By this time, the roads had turned to dirt, the sun was setting over the hills, and we were forced to traverse the final leg of the journey to Bwindi in the dark over washed out roads.  We were met at our “hotel”, The Gorilla Resort, by uniformed staff, hot towels and cold juice.  The hotel is a rustic by very nice permanent tented camp perched on the side of the Ravine valley facing the Gorilla rainforest on the other side. 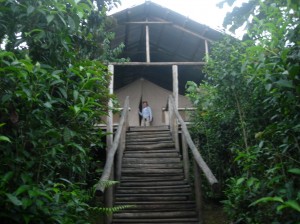 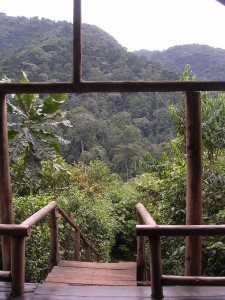 We had a hot meal of tilapia from the nearby lake, a bottle of wine, and headed off to bath and bed.  We were pleasantly surprised that each “tent” had a veranda overlooking the forest, two double beds, a complete en suite bath including a Victorian claw-footed tub, and hot water bottles under the covers of the bed to ready it for our well-deserved night’s rest.  Tomorrow we would search for the Mountain Gorillas.