We rise at 5am on Good Friday to meet our group of 8 and to drive west from Nigeria to the Benin border, an early start to avoid the Easter Holiday traffic.  We were up and ready to go, and so were 5 others, but one member never showed.  We waited until 6:15am and finally drove to his apartment and banged on his door.  Apparently a late night of imbibing had him a bit unprepared for the trip.  With our best-laid plans already in shambles, we dragged him out of bed and designated him as our trip’s “whipping boy”. Two hours later we made it to the border in the midst of heavy traffic and a very large crowd.  At the Nigerian-Benin border there are a series of stations, (tables), that you walk through outside, while carrying your bags with you.  Each station does one small part of the process, and then directs you to queue up for the next.  There were so many people that the noise level is quite high, the heat of the day beats down on you, the street hawkers/vendors are in your face, and chaos is everywhere. It took 1½ hours to get everyone through, with a small dash (tip) at the appropriate places to speed up the process.  We are a diverse group: Italian, American, Trinidadian, and British, 3 women and 5 men. After successfully negotiating the border, we met Grace, our Benin-native tour leader.  While in Benin, we would call a small 12-person van our “wheels”, and our trip started well enough on a modern toll road.  As we drove west into the large city of Cotonou, (named for “near the lagoon of death”, it was believed that it was here that dead souls traveled to the sea), we enter the land of round-a-abouts (traffic circles).  Your cruise along and then must slow down for a crowded, congested round-a-about.  Cotonou is the largest city in Benin and very similar to Lagos: crowded, noisy, lots of cars and motorbikes, and dusty, with plain concrete buildings.  Benin, as a country, only has a population of ~6 million people, and most of them are in the south near the coast. While Grace exchanged money at a bank, (unit of currency is the CFA – the Benin Franc.  ~450 francs = $1), we headed to a local bar and had our first beer – Flag Beer – cold and local. 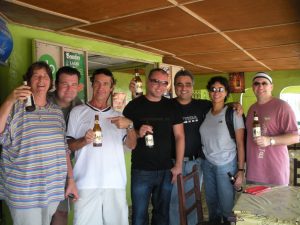 Then we began the long journey north in Benin, losing traffic and any decent roadways as we went.  We traveled through many local villages stopping to stretch our legs and ended up eating lunch at a local ostrich farm in the town of Dassa. 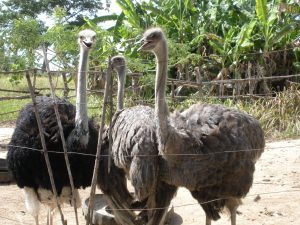 This time of year, in southern Benin, is the beginning of the rainy season, but we saw little evidence of anything but “dry”.  As we continued north through the villages in the early evening we saw several pilgrimages of men and women, (in the middle of the highway), celebrating the holidays with a person carrying a cross.  We eventually arrived in the north of the country at our “hotel” in the town of Tanguita, in the dark at ~10pm.  Hotel Baobob is a series of round one-room huts with an outdoor reception and dining area.

We were welcomed and commenced to drink all the beer and gin that the bar had stocked, while eating a locally prepared chicken dinner. The rooms that night were hot, stark and spartan – but we slept like babies in our mosquito-netted, floor-fanned comfort.

We were up early for breakfast at 5:00am to continue north into Pendjari National Park, a nature reserve on the border of the countries of Togo and Burkina Faso.

It encompasses plains, savanna, mountains, lakes, the Pendjari River and a forest, and is home to the largest variety of wildlife in West Africa, including lions, elephants, cheetahs and hippos.  We drove on red dirt roads the whole way, rarely seeing any other vehicle.  Our trip now was with 3 people, plus a driver, each in one of 3 land-rover jeeps, equipped with an additional bench seat on the roof!

All locals travel here by foot, or the occasional motorbike or bicycle.   It was blistering hot ~40 degrees C or 104F, as the rainy season comes much later to the area in northern Benin.  However, even with the heat we saw an African elephant, lots of birds, baboons, chevalier and roan antelope, kobe, hippos, waterbuck, deer, stork and crocodiles.  We all took turns riding on the roof seats, (a great viewing area), and red dust accumulated everywhere! 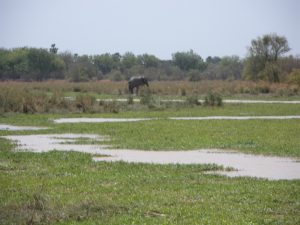 We returned to our hotel for dinner and entertainment by some of the local women.  They performed native dances and sang for us, making us participate with them and feel very welcomed.

Our original plans had us visiting a local village the next day, but we enjoyed Pendjari Park so much, we rehired the jeeps and drivers, and we were up early to go back and see some more animals.  This morning when we entered the park we saw a herd of forest elephants.  They are darker gray and smaller in size than the African elephant.  They also have a longer trunk and straighter tusks.  We saw fervet monkeys, buffalo, deer, small monkeys, baboons, antelopes, and birds. 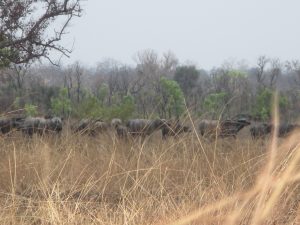 We watched as the Park Patrol began the burning of the bush, to control the forest’s growth.

We walked across the river border into Burkina Faso, which has an adjoining animal nature park bordering the Pendjari Park to the north. 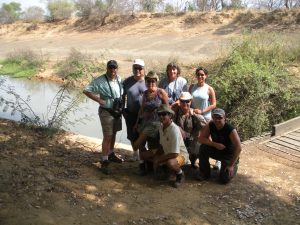 At the Benin/Burkina Faso border.

After lunch, we started our journey back south and stopped just outside of the park at a local village, Tanougou, where there was a wonderful natural spring waterfall.  We hiked to the end of the road where there was a small pool, but our guide said not to swim here, and we were directed to hike up more rocky terrain to the upper waterfall where there was a big, beautiful pool.  It was a cool and refreshing swim. 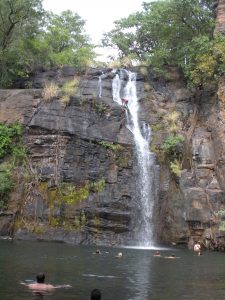 After a bit of shopping with the village locals, we traveled further south until we stopped for the evening in Natitingou, at the Tata Somba Hotel.  After removing layers of red dirt, we headed to a small, local restaurant that Grace had reserved for us, where we had local kabobs, rice, the world’s best fries, veggies, wine, beer and water.  The women all wore local dress and some even had their babies on their backs as they cooked and served us.  We danced to local music videos, avoided a few raindrops, and had a most wonderful evening.

The next morning we continued our journey south on to the town of Abomey.  Here we visited the region’s museum and learned the history of the 12 kings of Benin and their kingdoms, which spanned from the early 1600’s until 1900. 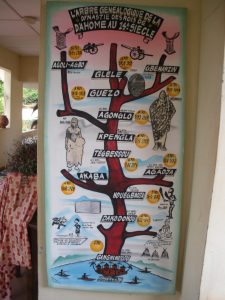 We were able to tour 2 of the king’s original palaces that are still remarkably preserved. Each king was represented by a set of symbols, and each had his own custom ceremonial throne, (one was built on the skulls of his enemies).  These kingdoms conquered much of this area of West Africa, and flourished by capturing their enemies and selling them to European Slave Traders in exchange for weapons and cannons.  This is also the origin of the original Amazon Women Warriors, which was an innovation of one of the kings to conquer a larger region.  It was a series of brutal and bloodthirsty reigns, which propagated the kingdom until the arrival of French Commander Dodd, who conquered the kingdom in 1900, and banished the last king to Libya.  At the historical site, we saw native blacksmiths and weavers at work and shopped the Benin traditional appliqué art.

The 12 kings thrones and alters.

We then headed to our hotel, Auberge de Abomey, where our group had booked all of the hotel’s rooms – 6 of them.  We had a splendid French dinner out on the porch, hooked up one member’s iPod to some speakers and had an evening of music, dance and conversation.

In the morning, we were up, (not so early this day), and continued our journey south towards the border.  Along the way we began to run into traffic again and were delayed when a tanker jack-knifed across the road.  This appears to be a very common occurrence in Africa where there are hills, as many of the large trucks’ brakes do not work going backwards. If the truck loses power going up a hill and then begins to roll backwards, they lose all control and jackknife onto the side of the road.  Nigeria, Kenya and Benin roads on hills are littered with the skeletal wrecks of these occurrences.  Luckily for us, in this case, the Belgian Army was on maneuvers here and quickly built a dirt road around the vehicle allowing us to continue or trip while only losing 45 minutes.

These trees with red flowers were just beautiful!

On the outskirts of Cotonou we turned east to Lake Ganvie where we boarded a boat and started a 30-minute journey to the middle of the lake to the Ganvie stilt village. 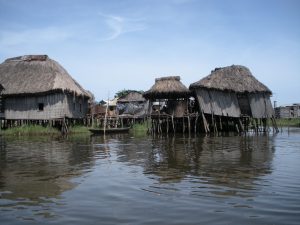 This village was founded during the slave trading days when the local fisherman were seeking refuge from the Abomey rulers and the European slave traders.  It is a fishing village today of 30,000 people, built on stilts in the shallows of the middle of this large lake.  We ate at a local stilted restaurant “Hotel Germain”, (buses welcomed?), having smoked fish and salads.  The locals here stick branches into the waters creating local habitats for fish, (each “plot is typically 5,000-10,000 sq yards).  After a period of time, they surround the habitat with nets, trapping the larger fish inside.  They then wait, allowing the fish to grow within this habitat before climbing inside and manually removing all of the habitat sticks.  This then allows them to close the area’s nets and capture all the fish that were inside. After a boat ride back to solid ground it was then back to the Nigerian border.  The noise and traffic congestion was a reminder that we were heading back to Lagos.  After going through the now-familiar series of border stations, we walked across the border and we were met by our auto drivers and our mopo, (motorized patrol), security escort.  Mopo took the lead with sirens blaring and lights flashing to escort our little convoy through the twenty-plus Nigerian checkpoint stops as you navigate the Nigerian countryside.  It was nice to whiz right on by these stops, and 2 hours later we were home. 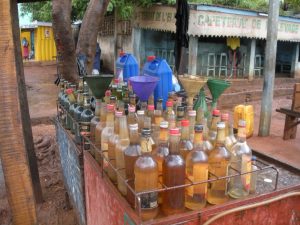 Black Market Petrol.  When the electrical power goes out  these little road side shops are where you buy your fuel. It is double what the gas stations charge, however, you really have no choice. 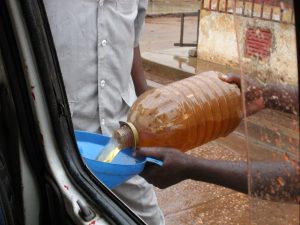 We bought petrol twice this way; 25 liters the first time and 15 liters the second.  Your engine does backfire once in a while with this fuel. 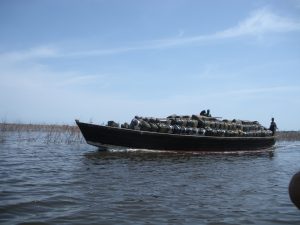 A boat full of empty 50 liter petrol cans headed to Nigeria to get petrol on the black market.