Our Royal Caribbean Western Mediterranean cruise took us to the country of Egypt for a day, and we decided to make the most of it.  Our ship docked at 6:30am in Alexandria, an ancient port city remade in recent history.  With our limited time available, we decided to make the 2 ½ bus journey into Cairo to see the ancient wonders of the Giza Plateau.  We met our bus and departed at 7:10am with a wonderful guide, an Egyptian named Mohamed Mandour, an inherited owner of a family Mango Orchard business with a worldly appreciation, a fine sense of humor, and a classical Egyptian lack of shyness in giving you his opinion on any topic you might inquire about. The route south from the harbor took us progressively on causeways through the Nile delta, past refineries, through grape-palm-mango-strawberry farms, into new, desert, housing developments, and finally into the city.

The cones are pigeon houses.  Note the sand – it is everywhere.

After reaching Giza on the west bank of the Nile, (Cairo city center occupies the east bank), one could not miss the Great Pyramid of Cheops rising above the skyline, viewable from almost anywhere in town.  The Pharaohs would build their early monuments up outside of the fertile Nile River valley where floods were common, onto the higher ground at the edges of the great desert.  Today, the city of greater Cairo, designed to support about 5 million people, is home to nearly 20 million individuals, and has pushed its expansion far into the desert – almost to the foot of the pyramids. 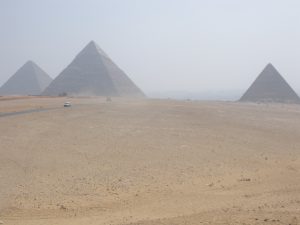 We went to a nearby Overlook on the Western Plateau, where Cheops and its sister-pyramids could be viewed, and where local vendors can be engaged for trinkets or a camel ride.  The locals have a classic “tourist fleecing” business plan that gets you engaged for little-to-nothing, and then forces you to pay to disengage.  An example of this is demonstrated by the local camel owners who will allow you onto their camel for $5-$10, but will then take you on a trek away from the Overlook, and charge you $20-$50 to bring you back or allow the camel to kneel to let you off.  Even the government security guards will encourage you to cross the “no admittance” security ropes that surround the pyramids, only to subsequently demand payment to keep them from arresting you for the violation.  It is the entrepreneurial system at work with a large posting of “Buyer Beware”. 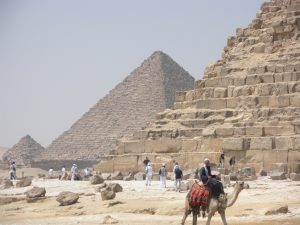 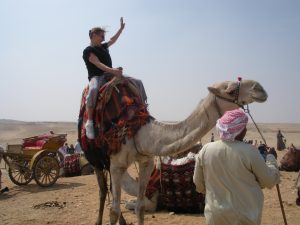 From the Overlook, we went back to the foot of the Pyramid of Chephren where we walked among the 4500 year-old ruins of adjoining temples and courtyards and went inside the display of the recovered “Pharaoh’s Boat”.

(A 43-meter cypress wood boat, buried for the pharaoh’s trip in the afterlife).  From the Pyramids, it’s a short walk downhill to the Sphinx, the famous half-man/half-lion monument whose nose was shot-off for soldiers’ amusement during the World War.  It is carved from a single, huge piece of limestone, and the bottom-half, which had been buried for centuries in the sand, is in remarkably good shape. 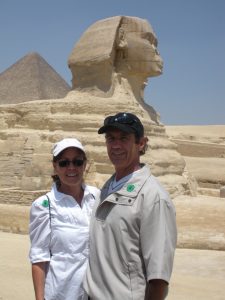 After leaving the pyramids of the Giza Plateau, we traveled into town for lunch 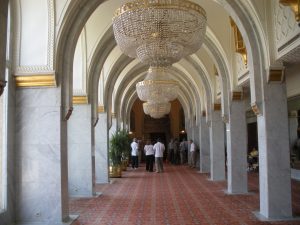 at a hotel/resort called the Mena House.

The Mena House was founded in 1869 as the Egyptian Royal Family’s Hunting Lodge.  It is ornate and lavish, and the staff met us with an amusing musical welcome of European & American National anthems played on an unlikely assortment of musical instruments, including bagpipes, trombone, ukulele and violin.

Lunch was an elegant buffet of typical Egyptian fare, and the desert table presented options we had never before tasted.

When lunch was over, we traveled southward to Memphis, Egypt’s first capital, to an open air museum at the ruins of the temple of Ptah that houses the Alabaster Sphinx and the recovered Statue of Ramses, along with an impressive collection of sarcophaguses, carvings, busts and artifacts. 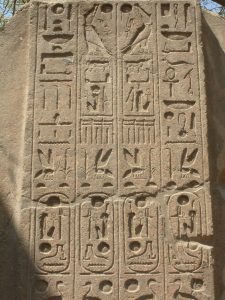 All around this particular area are locals with houses and dirt floors, who dig in secrecy at night under their dwellings.  They do this to recover artifacts which they sell on the illegal, antiquities market.  The government has tried to move them out, but with little success.  When they have exhausted investigating their dwelling’s footprint, they move their house to more opportunistic ground.  And so, the dismantling of the country’s physical heritage continues. Today, over 4000 years of Egyptian history are spread among the world’s museums, and a substantial part of the rest is hidden from view in private, illegal collections, assembled over hundreds’ of years.

From here, we traveled to Sakkara, the location of the oldest ancient cemetery in the world, where is located the world’s first monumental stone building, the Step Pyramid of King Zoser and a complex of Mastabas, (funeral chambers), built nearby, (~4700 years old).  We took time to enter one of the best preserved Mastabas’, where the hand carved and brilliantly colored paneled 33 rooms are relatively intact depicting scenes of everyday life in the Nile Valley.  We then traveled to the entrance to the courtyard and the excavation of the Step Pyramid, wandering among the unearthed columns and ruins of the surrounding temples and vaults. 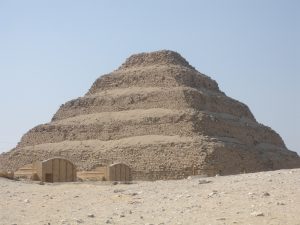 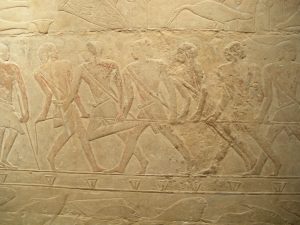 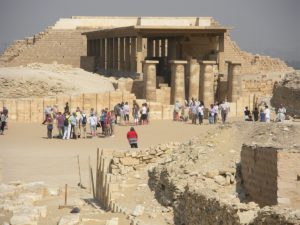 From here, we concluded our trip with a visit to the Papyrus Institute where the creation of papyrus “paper” from the natural papyrus reed was demonstrated.  The Institute also houses some beautiful painted papyrus scenes which can be purchased, along with an attached jewelry and souvenir shop.  It is here that one can get a customized “khartoush”, one’s name in hieroglyphics represented on a piece of jewelry that captures and protects the spirit, (I got a set of silver cufflinks, and Julie got a silver bracelet). 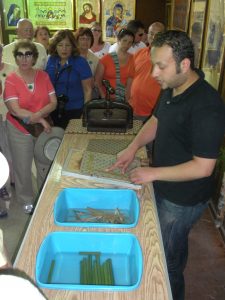 As the sun began to set, we headed back for the 2 ½ hour trip back to the Port of Alexandria, arriving at the Ship at nearly 9:00pm – a long but wondrous day!