Betty O spoke to American Women’s Club about the cultural significance of head ties as a fashion accessory and fashion statement.  Nigerian fashions, as fashion around the world, take their cue to change and evolve by national events and effects. Betty has lived in Nigeria for 45 years and is married to a Nigerian man.  In Nigeria there are 3 distinct cultural areas of the country.  The ‘Hausa” are from the north, the “Ibos” from the east and the “Yoruba” from the west. The Ibos head ties are noted for their flying saucer like shape.  The Yoruba are the ladies of high fashion.  If one reviews African history and pictures there were no head ties on the women until the 1850’s.  It is accepted that the influence of Christianity caused women to cover their hair.  Head ties have evolved with the times.  A head tie is a piece of fabric 2 foot by 2 yards twisted, knotted and pinned into shape.  In the 1950’s a British company “Hayes” made most of the Yoruba high fashion head ties.  In the 1970’s those head ties incorporated N  and $ (Naira or money) symbols into the woven fabric and other high society associated symbols including the Mercedes Benz symbol.   In the 1970’s the more popular head ties came from Switzerland.  Today they come from China.  Head ties are fashion statements and you never wear the same head tie to an important event.  People here have excellent memories and remember what you wore.  It is acceptable to wear a dress more than once but only if with a new head tie each time.  Nigerians are extremely fashion conscious and will starve to have a new head tie.  A head tie is also symbol that one is married.  A responsible married woman wears a head tie that is wind around the head at least twice and with an “Ashoke” which is a shawl around the waist or over the shoulder.    There was a time when head ties were made of silk.  But when a head ties is old or of floppy material one has to stuff it with a plastic bag or paper for it to hold its shape.  Damask was used by the wealthy ladies as head ties because it was heady.  However, it was also difficult to tie.  If you are high fashion Nigerian then once a year you will clean out your head ties and distribute them to relatives who do not have as much as them. It is also quite fashionable to take old head ties turn them into quilts. 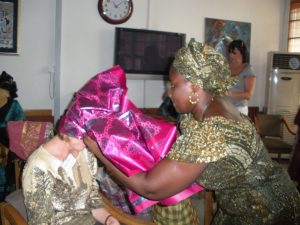 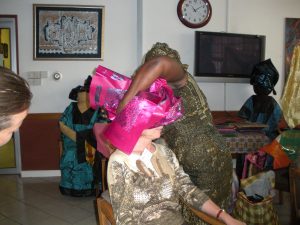 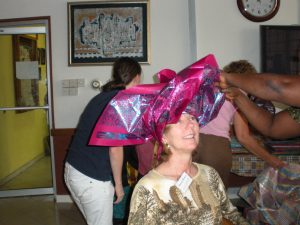 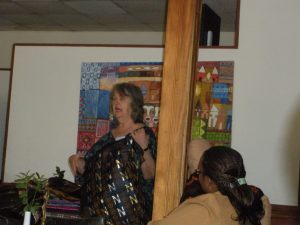 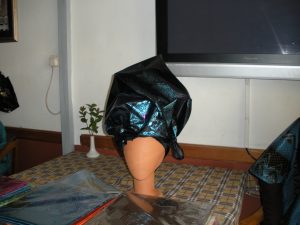