When we went to bed the night before at the Simba Lodge at Lake Naivasha, Kenya, we all agreed to wake at 6:30am, before sunrise, and take a walking safari around the grounds to see what animals would be about.  Our first view was herds of waterbucks that had bedded down for the night right outside our door and who eyed us cautiously as we quietly began our stroll.  At the gate to the lake, we met up with some Brits with the same idea as us, and their guide, who told us that on yesterday, they had seen a local giraffe that was ready to give birth.  As we walked in the cool morning mist, we saw groups of zebras, waterbucks and finally a group of about a dozen giraffes.  After circling the giraffe family, we found a giraffe mom protecting a newborn only hours old in a clump of bushes.  The newborn giraffe was downy and not able to stand yet, with mom protectively standing over him.  After observing and taking pictures for a while, we headed back to the lodge for breakfast, checked out of the Simba Lodge and began our trek onto the Masai Mara plains. From our guide and driver, we learned the differences in the types of Acacia trees, from the large, lone Acacia Umbrella tree, (which our son Tony particularly liked), to the scrub brush acacias that thrive and survive through their symbiotic relationship with local ants. Once we approached the area, we saw the traditional Massai villages and the classical herding of the Massai Zebu cows.  These cows are protected and honored by the Massai, and provide them with nearly everything that they need to live.  As such, they share their living space with the herds, as well as believing that the cow was a special gift specifically to the Massai people from God, and historically they would view any other people or tribes owning cows as having stolen their “gift”, as all cows must belong to them only.  For centuries, this was a major source of tribal wars in this region of Africa.

Along our travel, we were particularly impressed with the growing abundance of Euphorbia “cactus trees”.  These beautiful trees stretched 40-feet high, and dominated large stretches of high plains semi-arid grasslands.  Just outside of Masai Mara Park, we arrived at our accommodations for the next two nights, the Nyumbu Tented Camp located on the Ngili Plains.  Here we checked in, ate lunch, met the camp’s owner, Chilo (Adam), and then went for a visit to the Olepolos Massai village.

At the Olepolos village we were met by John, a 20 year old Massai warrier.  All Massai warriors are single men between 14 and 27 year old.  They typically attend ~7 years of local school, taught by missionaries, between the ages of 7 and 14 years old.  This village is a larger, well established village of 102 residents and 120 cows. Their Village is a circular camp of huts surrounding a yard where the cows are herded to each night.  Their huts are made of mud and cow-dung, packed and smeared over sticks.  Each hut is only ~3m by 3m with stick & cow-hide cots for one man and his wife and a small room for any youngsters. Each hut is built by the village women over a 6 month time period.  At 7 years old, the children are separated from their parents, and get their own hut to sleep away in. For welcoming us, 12 village women sang songs and danced. Then, the warriors sang and demonstrated their prowess by jumping straight up.  The Massai believe that how high a Massai man can jump indicates how many wives a warrior should pursue during his life.  The village yard was an unsanitary, mushy area that was a mixture of mud and dung and the local little children were surrounded by flies.  It was a heartbreaking view!  We visited their local craft shop, thanked them, and then left for safari in the park. 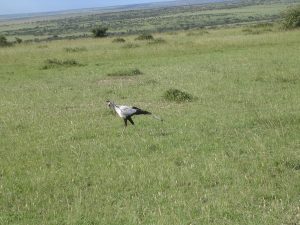 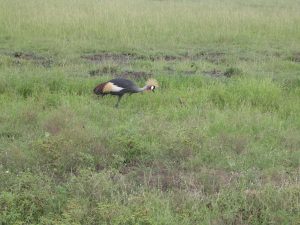 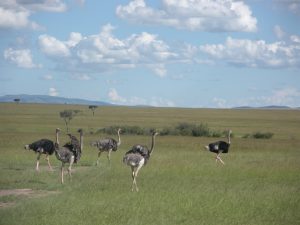 Upon entering the park, we immediately came upon Storks, Ibis, and Secretary birds, and then observed a group of 4 Ostriches.  We traveled towards Paradise Plain, crossing the Ntiaktiak and Olare rivers, when our driver, Fred, became excited and indicated a surprise was coming.  We bypassed a herd of elephants in the distance and came up on male lion patiently stalking a herd of vigilant Topi and Gazelles.  After he tired of the stalking, the lion came up to our vehicle and laid in the shade created by the shadow of our truck.  Now the vehicle inside of which we were, had the roof raised for viewing, creating a 2-foot opening all around, and if we had wanted, we could have reached over the side and tugged this lion’s mane!  When the lion left, we moved on as well and came upon a large herd of water buffalos (over 200).  Up ahead a little further, was an adult female cheetah with her adolescent cub that was resting and playing on a small hill.  At this point, we headed back towards the elephant herd we had seen earlier. This was a group of 12 elephants with 3 babies.  We watched them eat and frolic near a small local stream before we moved on again. Just a little ways ahead, we came up on another male lion up on hill.  As these we younger males, we wondered if in fact that these two that we saw were working and hunting together in a pair.  Afternoon was waning and an angry sky indicated a storm was coming, so we headed back across the rivers, which by now had risen, almost submerging the doors of our vehicle.  On the way back, we saw Hartebeests, a very large group of Baboons (100 to 200), a Hyena stalking a herd of Gazelles, and two groups of 3 Jackals each, hiding in the grass.  We came upon a family of Mongoose and a large family of Ostriches before we finally sighted our camp on other side of valley.  As the sun set, we made it back to camp.  This left time for a hot shower, an elegant dinner and conversation with an old friend, a U.S. educated Massai Warrior named James.  Finally, we were escorted to our tents by our Massai protectors, and went to bed, where we fell asleep with the roar of lions just outside the camp echoing in the valley. 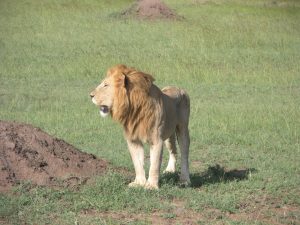 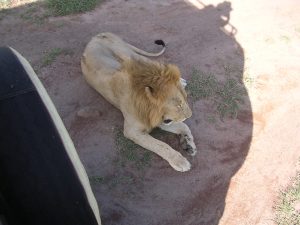 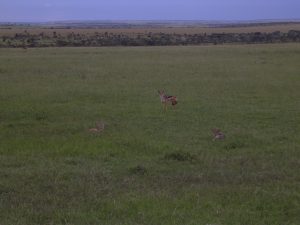 During the night, the storm passed, and the camp was visited by giraffe and impalas, taking refuge from a lion kill that took place just outside of camp. We awoke for breakfast and left early for a day of game drives through the Masai Mara Park. 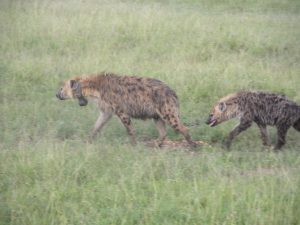 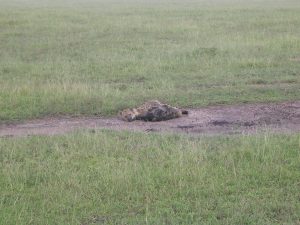 This time, we entered the park through the Talek Gate, and immediately came upon small herds of Topi, Gazelles and Impalas.  Animals tend to stay near the Gate, since its location and activity wards off predators.  We saw a number of Warthogs and a group of Ostriches, and then came upon 4 Hyenas, on which the male was outfitted with a tracking collar.  At first he led the pack on a stalking of the herds, but then, he gave up and lied in the middle of the road. We went to the top of the hill where 2 Cheetah brothers had just killed a Thompson Gazelle and were feeding on it.  We observed this for 30 minutes, while the two devoured most of the carcus. After we left them, we soon came upon a lion couple, lazily sleeping on the side of the road.  Male and female lions are only together during mating season, and this male and female were obviously a mating couple, apparently worn out from their courtship.  After they rested for 15 minutes, and just as we started our vehicle’s engine, the male lion arose, approached and mounted the female while roaring lowly in her ear.  After a brief encounter, the male left her and went back to sleep while the female rolled to her back and slept as well.  Apparently, this will be the hourly routine for much of a week, after which they will resume their separate and solitary lives once again. 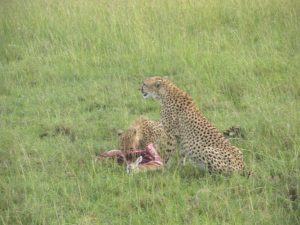 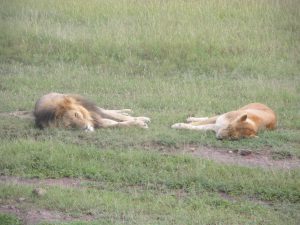 We then took a long excursion south across the Masai Mara park to the Trans Mara crossing into Tanzania, where we crossed the Mara river over and back and then went on to Lookout Mountain for lunch.  After lunch, we went back to the Mara River on the Kenya side, where we went to the hippo pools and saw the largest hippos, yet.  These river Hippos were huge compared to the ones we saw in the lake, and they were in large groups of ~20.  Further on, along the banks of the Mara, we encountered a group of water buffalos and then came upon 3 very large crocodiles sunning themselves on the river’s banks.  These crocodiles were up to 5 meters long, weighing over 1 ton each.  We finally began our long trip back, encountering mongoose, ostrich, numerous elephants, giraffes and herds of other grazing animals along the way.  As we approached the exit to the park, we came up to a large female lion resting comfortably near an intersection in the road.  She had a view of the valley in every direction from here, and was likely waiting for dusk, and a wandering victim.  After passing waterbucks, topi, gazelles, warthogs and more hyenas, we exited the park and headed back to our tented camp for showers, tea, a little rest and then dinner.  During our dinner that night, four local Massai Warriors surprised us with a series of warrior dances, which we very much enjoyed.  Then, we were off to pack and a good night sleep, in preparation for leaving the next day. 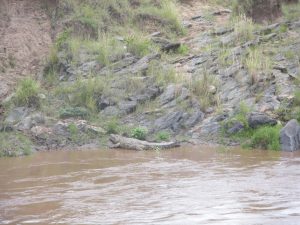 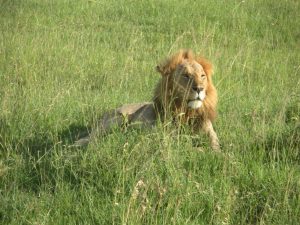 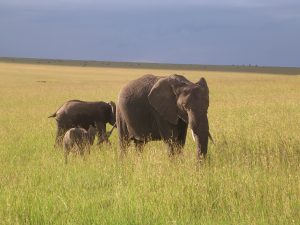 We rose early, had breakfast and said our goodbyes.  On the return trip to Nairobi, we took a final drive through the park by entering at Talek gate and exiting at Sekenani Gate.  This was a cool overcast morning, and we saw only the typical herds of grazing animals on this travel.  We arrived in Nairobi early enough to take time to visit the Nairobi Giraffe Centre, where we hand fed Giraffes, observed Leopard Tortoises and took a leisurely nature walk.  As dinner time approached, we headed to the Carnivore Club – an African Churascio serving multitudes of meats including pork, beef, chicken, turkey, lamb, ostrich and crocodile!  The club also has a sports bar area, where we sat with the locals and watched Arsenal chalk up a “win” in the English Premier Football League.  We were then seated for dinner, ate all the meat we could handle, and finally, began the closing of our trip by taking Tony and Stephanie to the airport for their return flight to Holland and the U.S.  After dropping them at the airport, Julie and Rocky headed downtown to the Safari Club Hotel for a brief night’s stay, before flying back to Lagos, Nigeria on the next morning, Easter – 2010. 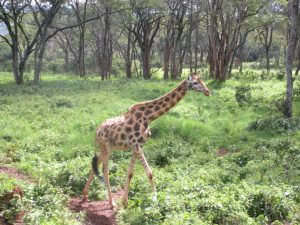 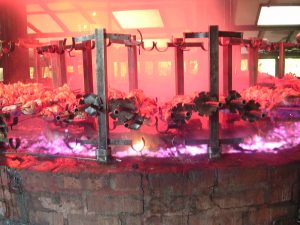