The gentle knock and friendly call of “good morning” woke us at 4:55am.  We quickly freshened up, dressed and headed to the lodge for a quick biscuit and coffee, before boarding our Cruiser for an early morning game drive. This is rainy season in Kruger, but we have yet to see any rain, and the roads and creek beds are dry.  The soil here is predominantly sand and loam, which means that any precipitation disappears fast, except where numerous water holes preserve their catch.  Immediately on our drive this morning, we came upon an enormous bull elephant eating marula seeds beneath a tree.  This is a favorite food of elephants in the area and is more widely known as the basis of the Amarula drink commonly associated with South Africa.  After passing and stopping to observe numerous herds of grazing animals, Doctor made an interesting discovery of tracks on the road.  Many of the predator animals use the roads in this area to move around, as it takes less energy than for them to move through the dense bush.  We circled the area and came upon two cheetahs resting in the road, a mother with her 2-year old full grown daughter.  They were obviously tired from a recent chase and paid us no attention as we came up to within a few feet of them.  Finally, they got up and moved on to an area where a wildebeest and gazelle herd kept a watchful eye on them.  Once there, the mother took higher ground, while her daughter sought shade under a small tree, and we positioned ourselves almost directly between them.  After a while, the mother circled our vehicle close enough to be touched, and joined her daughter to gently groom and clean her.  This daughter would be leaving her mother soon, but for now, their bond was apparent. 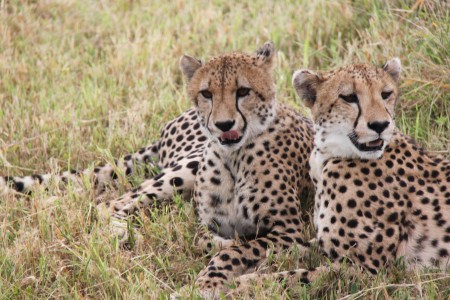 We left the cheetahs and began out trip back to the lodge when we came upon a herd of ~10 elephants, including a 3 month old baby elephant hiding beneath his mother, taking water at a water hole.  We kept a bit of distance on this group, (100ft), as we watched them spray water around from their trunks, and drink to their content.

We then returned to the lodge for breakfast, a mid-afternoon plunge in our private pool and spent time reading and relaxing on chaise lounges on our suite’s back deck.

After a wonderful lunch of steak or vegetable salads and a Windhoek beer, we embarked on our afternoon game drive at 4:00pm, and Matt took requests.  Julie still wanted to see Rhinos, and so Doctor and Matt vowed to give it their best shot.  We headed to an area where the terrain lends itself to Rhinos, and soon came upon a large group of giraffes, casually eating the tops of trees, and wary of us watching them from so close.  When they moved off, we resumed our journey until we came to a 5-track intersection, and Doctor and Matt stopped the vehicle and left for a bit of bush on-foot tracking.  They returned in 5-10 minutes claiming that Rhinos were here recently, and that they had moved off to our left.  We took that road, and when we came to the next fork, Doctor indicated we should go left again.  We traveled no more than 5 more minutes when we came upon 4 very large White Rhinos, grazing on the fresh grass surrounding a large termite mound beside the road.  We watched them from various positions 20-30ft away as Matt told us much of their habits and challenges in surviving horn poaching.  We followed this group down to a watering hole, but then finally, left them and headed towards an area that Matt was familiar with that was home to a recent mother leopard. 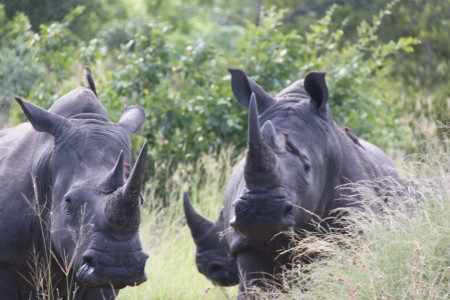 Along the way, we came upon two enormous giraffes, one who was very old, with a very dark coat and grey face. 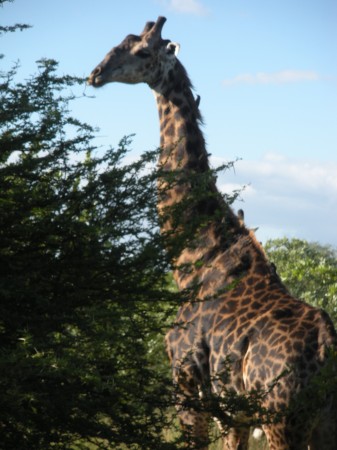 We continued and finally came upon another vehicle that had spotted the mother leopard hunting in the bush, and we joined the stalk.  This leopard was clearly trying to stay hidden, remaining very low in the grass, and intent on her gazelle prey.  Matt, being familiar with her, took up various advance positions, knowing that she would have to pass close to us.  At one point, she was only 10-15 feet away in the grass, almost invisible except for the nervous twitch of her tail.  But apparently, she had had enough of our interference, when she suddenly leapt from the grass at us, barring her teeth in a snarl, prompting gasps and surprise from all of us, as Matt thumped the side of the Cruiser and shouted, and she frustratingly slunk away.

While we caught our breaths, Matt took us to a local watering hole for drinks, but a water buffalo had already claimed it for his own.  In better judgment from our recent encounter, we decided to move on to a little clearing where we took our usually snacks and well deserved G & T’s.  After settling our nerves and our stomachs, we set off again while the sun set.  In the dusk, we came upon another group of 4 Rhinos, and watched them briefly until darkness fell. 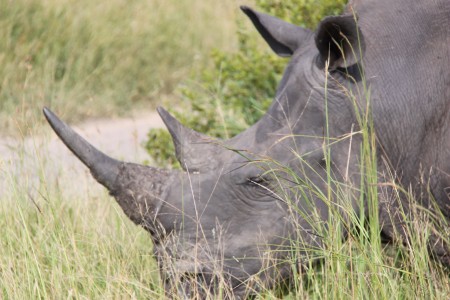 On the way back, we could see another vehicle on the road facing us with their spotlight on.  We stopped and waited, as a very large male leopard walked straight at us, from ahead, down the road.  He passed the vehicle only 1 foot away, easily within touching distance, as we held our breaths and snapped our cameras.  We followed this leopard for a bit, as he marked various places along the road in a campaign of “territorial housekeeping” making sure that his boundary was well announced to all. 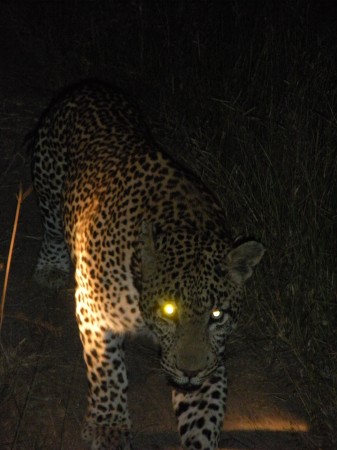 Finally, it was time to head back, but Doctor had the spotlight out, and along the way he brought us to a halt, jumped to a nearby bush in the dark, and emerged with an 8 inch and 2 inch pair of green chameleons. 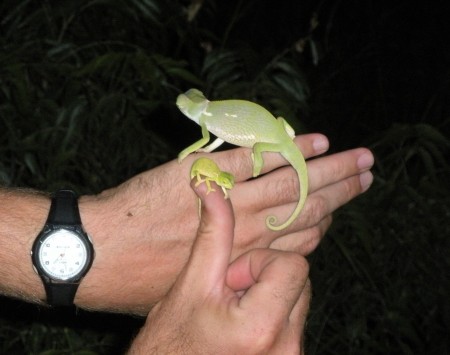 How he spotted them in the dark, we had no idea.  We continued to the lodge, had our wet wipes and ports, and prepared for dinner.  But, tonight was a surprise, as the staff escorted down to the dry, sandy river bed where they had set up a barbeque grill, a complete bar and a custom dining room outdoors on the floor of the river.  Drinks, salads, scalloped potatoes, baked onion casserole with grilled chicken, kudu and corn on the cob was the feast of the night.  Dessert was carrot cake with a sparkle of starlight and the night was magic.  And then, off to bed! 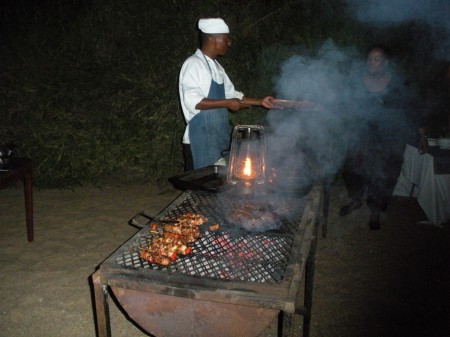