A group of 13 of us left Ikoyi in a Chevron bus and security chase at about 8.15am. We hit light rain but we made it to the Hospital just after 10am and were greeted by Father Yemi Akinlotan.

Sacred Heart is the oldest hospital (over 110 years old) in Nigeria located outside the city of Abeokuta in Ogun State in Nigeria.  Abeokuta is the capital of Ogun State.  The hospital was started by French Catholic missionaries as a leper hospital.  Doctors from all over the world have come to Sacred Heart to do research.  While it is no longer needed to treat leprosy the hospital continues to serves the local community treating HIV/Aids and the gynecologic needs of the area. Today it is 400 beds in several one story buildings. 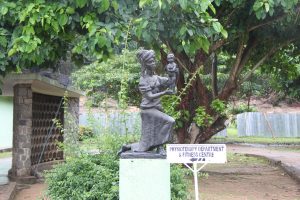 We had a small cheque presentation ceremony in the conference room next to the Matron’s office.. Both Dr Adegbite (the amazing lady doctor) and the Chief Medical Officer were present and both he and Fr Yemi assured us that our donation of N3.7 million (N989,000 (or ~$6,500) from the Small World organization and the balance of  N2.711,000 million (or ~$18,000) from the BWG (British Women’s Group)) would be spent on the tipper/dumpster truck as promised. They hope to take delivery in the next week or so and will send the BWG copies of all the relevant paperwork.  The doctors expressed great pride in that this donation would make the public health of the patients better allowing for a “pristine environment” and “zero infection”.  This is one of the cleanest hospitals I have ever been in and is a tribute to the staff caring for the patients.

The sincerity of the staff and the dedication that seems to come from them was shown further shown when we toured the hospital. The worn- out tanker we were originally trying to raise funds had been replaced by a shiny new one with help from an American HIV/Aids program. The tanker was brought to the car park for us to inspect and take photos. We were very happy to see that the cylinder of the old water tanker was able to be salvaged and it has been refurbished and mounted on concrete blocks as a standing water source. Very useful for the hospital of course as it struggles to receive main water. 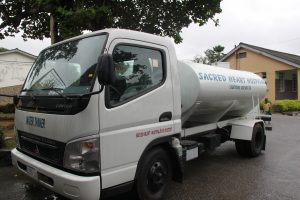 We spent about three hours at the Hospital which was trying to cope with extra patients due to a state hospital & docotors strike. And we were told , that administration has a policy of not turning anyone away whether they can pay or not. We had detailed ward tours seeing a female diabetic patient who had treated herself with ‘voodoo’ medicine (that did not work), a young girl with a heart valve problem and a tiny young baby of 6 weeks who was having convulsions.  Dr Adegbite also showed us the ultrasound machines on the obstetrics unit.  She had a queue of patients for the ultrasound.

We also saw the store room where donated equipment is kept; there has been a consignment from contacts in Germany & Switzerland including an additional incubator. We also saw the pharmacy which was well stocked and we were told that the Hospital has good contact with reputable drug manufacturers (as opposed to fakes) and most drugs were manufactured in Nigeria.  The hospital is currently employing two pharmacists and a dozen pharmacy technicians. 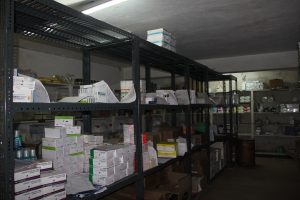 The laboratory was interesting as they now have a digital analyzer along with numerous analog machines. 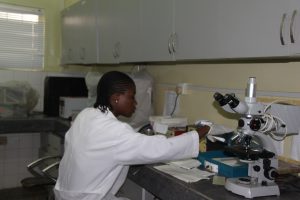 Father Yemi took us to a site at the back of the Hospital where new ground has been broken and proudly showed us plans for a new trauma centre with a trauma theatre and emergency wing including an Intensive Care Unit. This is his next fund-raising project and he is aiming to raise about N35 million! He is off on a trip to Europe next month to see if he can get some more European donors and Dr Adegbite was telling us that if anyone can do it, he can!

Sacred Heart also has a nursing school.  The school takes 50 students a year and has quite stringent entry requirments.  There are usually over 500 applicants.  The program is 3 years and the students do most of there clinicals at the Sacred Heart or one of its 4 satelite clinic facilities.

Sacred Heart Hospital partners with “Smile Train”, a USA based organization to provide cleft lip and palate surgery.  Here in Nigeria cleft lip or palate problem babies are hidden away in the families and away from public view. The surgery is free of charge; two surgeries were done in 2009 and one in 2010 so far. In 2009 Sacred Heart cared for over 11,400 inpatients and greater than 63,000 outpatients.

Afterwards we were treated to tea, yogurt, homemade meat pies and donuts. We were thanked for “wanting to serve humanity, touching the lifes of thousands of children and patients”.