November 1st we ventured with the Nigerian Field Society to Makoko, a stilt village off the Third Mainland Bridge of Lagos.  This stilt village has been in the waters off Lagos Mainland for 2 generations now.  It is a village built entirely on stilts sitting in the water.

There are only waterways as roads. The population is ~9,000 people. It is made up of the fishing people of Benin seeking a better life.  We started by embarking into 3 skiffs to traverse the 30 minutes to the village.

We were accompanied by a couple who visit this village about once every 6 months always taking a small number of people to expose them to a different side of life here in Lagos.  Today there were 20 of us and we came bearing gifts:  cash for the children’s school and school supplies, drink for the Baale, and pictures of the previous visit.  We were greeted by the Baale’s men and welcomed into the community center.  We were allowed to ask any questions (through an interpreter) of the Balay and then given a tour by banana boat of the village.  The Baale is a mayor like figure that overseas the community handling most anything and everything.  He allowed picture-taking and was most gracious to the invasion of 20 Obinyos (white people).

The young man that guided us through the village was born and raised in Makoko.  He spoke English and conversed readily about the villages’ way of life.  The children begin swimming and paddling a boat from birth.  We saw 4 year olds out alone paddling a boat. 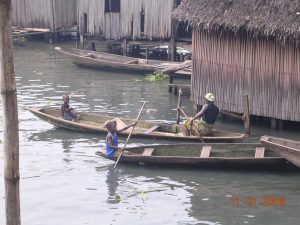 The elders and older youth go to the sea daily to fish and once the fish are sold the other necessities’ are either bought or bartered.

There is clean water that comes from the mainland.  The day we were there, the pipe sprung a leak and we watched them pull it up and cover the leak with a piece of rubber and drop it back down.

There are boats moving through the village selling cloth, clothes, DVD’s/CD’s, recharge cards (for the cell phones), oranges, smoked fish, vegetables and fruits (actually, they sell anything you can think of).

Yes a few people had electricity and a couple of homes had generators.  Most homes were one large room on stilts, but some were 2 stories tall and some had porches.  Several had outdoor showers to the side of the home.  During the tour the children smiled and yelled “Yaboo” (their word for white person).  The children want you to take their picture and then show them the picture.  They also want to touch you.

It was interesting to see those who have so little and make so much of what little they have.  It certainly was unlike any other village we have been to.