Here we took a short bus ride from Frankfurt to Heidelberg to visit the 15th century Heidelberg castle, an imposing Gothic Renaissance ruin of red stone. It is a massive castle. Heidelberg also houses the oldest college in Germany, Heidelberg University. While at the castle we rode the first of many funiculars down the side of the mountain into the cobblestone pedestrian down town.  We ate at a local restaurant having the traditional pork and sauerkraut meal at Hotel Georg zum Ritter dating back to 1592 before returning to Frankfurt. 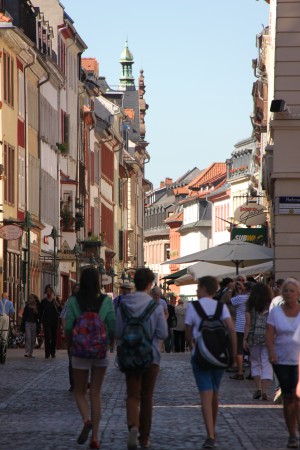 Then after dinner since we were having a late sail, we strolled into Frankfurt and partook of the local scenery and beer.