Eko is the ancient name for Lagos.  This morning I attended a coffee and trunk showing of African jewelry by Ruth Omabegho.  Ruth , an  artist (she has a PH. D. in art)  and her husband Billy, sculpture and furniture maker, have lived in Africa for 29 years.    You can see Billy’s work (sculpture Zuma, 24 foot tall) in New York City in front of the Nigeria House. 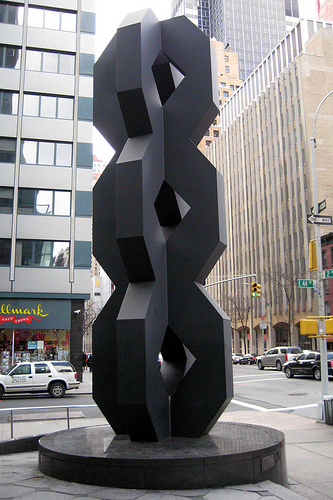 Ruth has taken African influences and combined with semi-precious stone, beads, silver, leather, and silk has produced a dramatic range of contemporary jewelry.  While Ruth brought a large trunk of jewelry to show, she also talked about the beads that she has seen and collected over the last 30 years in Nigeria and Africa. Not all “trade” beads came to Africa from the European traders. Trade beads were originally used in trade for gold, oil, and cloth.  The village “Oba” (kings) eagerly collected trade beads as they were a sign of wealth. The Oba wore as many beads as he could at one time which necessitated the need for men to help hold him up on both sides so that he could move and walk as the beads were so heavy.  As the years progressed these beads were then used for slave trading.   There is also a theory that one threw beads on the rivers for good luck and people still claim they find beads in river beads and where the rivers meet the oceans.  Early beads also came from Egypt where all the ingredients needed for glass beads already existed.  One should closely exam trade beads and note that old beads are drilled from each end and sometimes the hole does not exactly meet in the middle. (If drilled from one end only they crack, of course,  that was before there were laser drills which are used today). Ruth states her jewelry is really re-cycled objects (i.e. trade beads and other beads from a variety of African countries).  She started making clothes and robes from African fabrics never knowing that she was famous and successful. Then one day while traveling on a plane she watched the movie “Arthur” with Dudley Moore and saw him wearing one of her robes in the movie! Eventually her talent turned to jewelry making.  Her jewelry is sold here in Lagos, London and New York City.  She also casts miniatures of African Artifacts in Gold and Silver.  She will be participating in a show in November at the Museum of Art & Design in NYC. 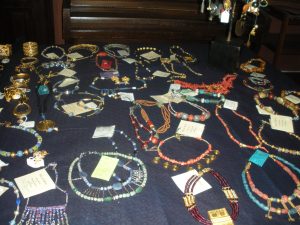 Ruth’s Jewelry creations.  She never makes more that 3 of any one design. 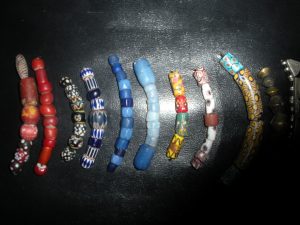 Today the door prize was a pair of earrings – “Buffalo Earrings” adapted from a ceremonial African mask. 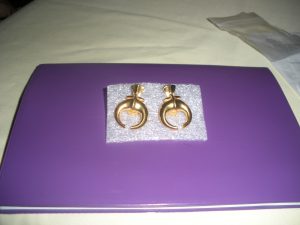